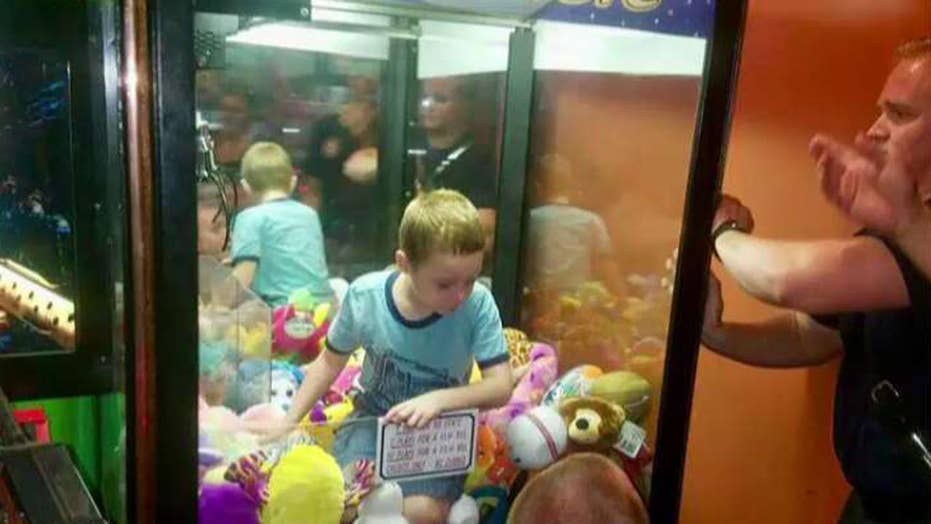 Boy gets stuck inside claw machine at Florida restaurant

Firefighters rescue boy who crawled inside to get a stuffed animal.

A young boy who was really set on getting a stuffed toy from a claw-style vending machine at a Florida restaurant ended up getting stuck inside it on Wednesday, according to officials.

Titusville Fire and Emergency Services said in a Facebook post the incident happened at a Beef O'Brady's restaurant on the state's Atlantic coast.

"This evening little Mason was enjoying some food and decided he wanted a stuffed animal," the rescue agency said. "He wanted it so bad, he climbed into the game to get that toy!!"

Fire officials said the boy was "never in any distress," and an off-duty firefighter who happened to be there eating dinner contacted his colleagues.

Officials rescued a boy from inside an arcade claw machine on Wednesday in Florida after he climbed inside to get a toy. (Titusville Fire and Emergency Services)

The boy's age was not released.

Mason was in the machine for about 5 minutes, and sat on top of the toys while firefighters worked to get him out, Battalion Chief Gregory Sutton told The Associated Press.

The door on the claw machine that a young Florida boy went through and ended up getting stuck in. (Titusville Fire and Emergency Services)

"He went in, but obviously he couldn't come back out the same way," Sutton said.

The machine sustained minimal damage from the rescue, and Mason was able to rejoin his family for dinner, although he was a bit embarrassed. But the ordeal wasn’t entirely fruitless – he was given a toy afterward.

“We love a happy ending,” the fire agency said, “and are glad everything worked out.”