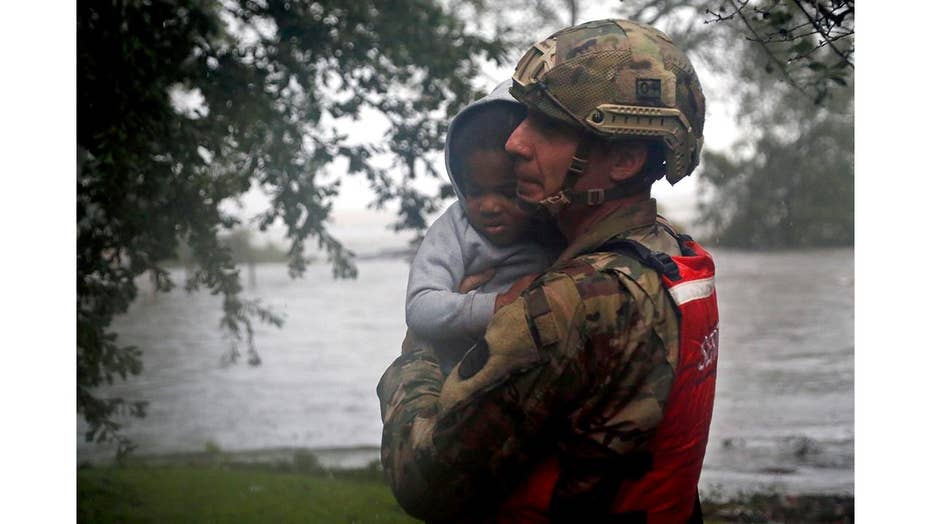 Even though Hurricane Florence has been downgraded to Tropical Storm Florence, it is still dangerous due to its slow-moving pace that is causing torrential rains and heavy flooding.

The further downgrading of what had been a powerful hurricane several days ago came in a 5 a.m. ET Sunday advisory from the National Hurricane Center.

With the update, the NHC also announced that a tropical storm warning stretching from South Santee River, S.C., to Surf City, N.C., had been discontinued, and that no coastal watches or warnings remained in effect.

On Saturday, officials in South Carolina confirmed the state’s first fatality from Florence, bringing the region-wide death toll from the storm to at least 11 -- though the News & Observer in Raleigh, N.C., was reporting at least 14 deaths.

Police said a 62-year-old woman was killed late Friday when the vehicle she was driving struck a tree that had fallen across Highway 18 near the town of Union.

Capt. Kelly Hughes of the South Carolina Highway Patrol said the woman, who was wearing a seat belt, died at the scene and no passengers were in the vehicle at the time. 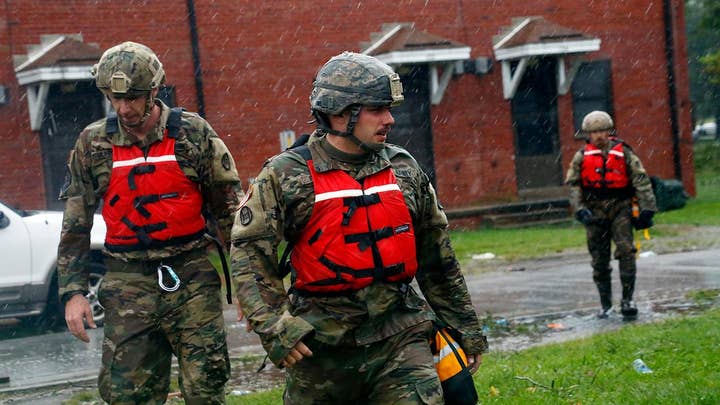 A mother and her 8-month old child were among the first confirmed dead after a massive tree crushed their brick home in Wilmington, North Carolina on Friday.

Another man, 81, died Friday while trying to evacuate Wayne County, North Carolina, and a husband and wife were killed in a house fire, according to the medical examiner’s office.

Lenoir County spokesman Bryan Hanks said a 78-year-old man was electrocuted in the rain while trying to connect extension cords for a generator and that another man, 77, died after he went outside to check on his hunting dogs and was blown down.

Rescue workers, police and fire department members wait to remove the bodies of a mother and child who were killed by a falling tree as Hurricane Florence made landfall in Wilmington, N.C. Friday Sept. 14, 2018. The father was transported to the hospital with serious injuries. (Chuck Liddy/The News &amp; Observer via AP) (The News & Observer ©2018)

Authorities in North Carolina have confirmed 10 deaths so far. Early Saturday, the state tally fluctuated when officials initially counted, then subtracted, two deaths now thought to have been the result of a murder-suicide during the storm. That case is under investigation.

Mandatory evacuations were issued for areas surrounding the banks of Cape Fear River in North Carolina.

The National Hurricane Center said on Saturday afternoon that “catastrophic flooding” is expected in certain parts of the Carolinas. 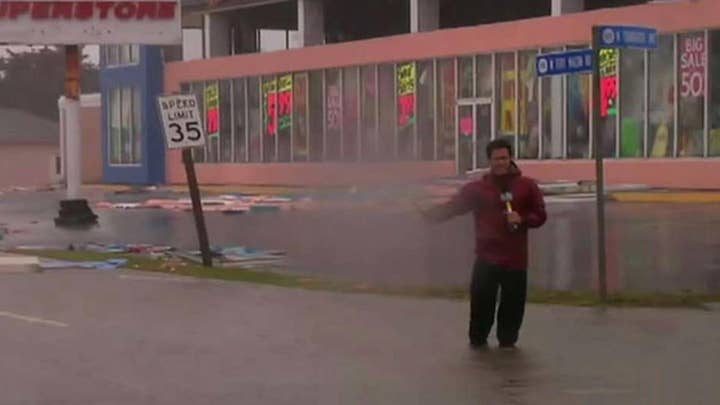 Florence parked itself over the Carolinas on Saturday, bringing with it torrential downpours, dangerous winds and coastal flooding that required hundreds of water rescues and ended in multiple deaths.

Emergency workers have been going door to door in North Carolina, pleading with people who have chosen to ride out the storm to leave.

“I cannot overstate it: Floodwaters are rising, and if you aren’t watching for them, you are risking your life,” North Carolina Gov. Roy Cooper said Saturday.

More than 2 feet of rain over the course of 24 hours has fallen in some places in North Carolina, with forecasters calling for an additional 1½ feet by the end of the weekend. The fear is that flash flooding could devastate communities, endanger dams and block bridges. The storm also knocked out power to nearly a million people.

Aerial photos along the coast near New Bern showed homes floating in water and rescuers racing to reach the people who were trapped inside.

Cooper called Florence an “uninvited brute” that could wipe out entire communities as it grinds its way across land.

“The fact is, this storm is deadly and we know we are days away from an ending,” he said. 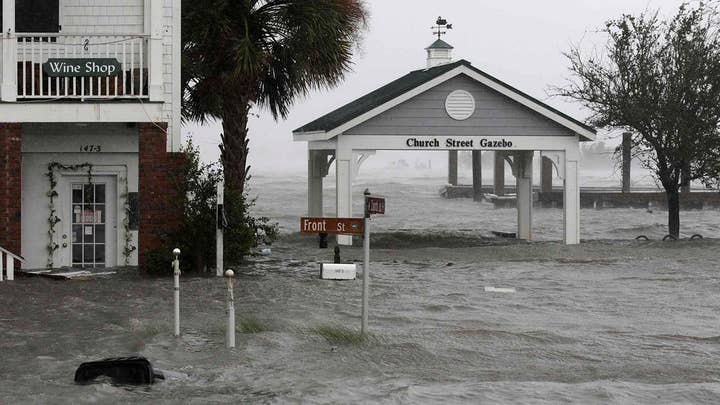 Since Thursday, more than 360 people have been carried to higher ground amid rising waters from a river swelled by both rain and salty storm surge.

"We have a lot of downed power lines," he told Fox News. "We're very concerned with these energized lines and folks could get hurt. So give the city time to get out and assess our infrastructure and get the roads safe for you to travel."

Shaken after seeing waves crashing on the Neuse River just outside his house in New Bern, restaurant owner and hurricane veteran Tom Ballance wished he had evacuated.

"I feel like the dumbest human being who ever walked the face of the earth," he said.

Since its roared ashore, Florence has flattened trees, buckled buildings and crumpled roads. Storm surges -- the bulge of ocean water pushed ashore by the hurricane -- were as high as 10 feet.

Florence peaked at a Category 4 with top winds of 140 mph over warm ocean water before making landfall as a Category 1. It blew ashore along a mostly boarded-up, emptied-out stretch of coastline.

By midmorning Saturday, Florence lazily inched its way about 40 miles west of Myrtle Beach, South Carolina at 2 mph – slower than most humans walk.

Morehead City, North Carolina, had received 23 inches of rain by Friday night, and forecasters warned Saturday morning that parts of the Carolinas could get up to 15 inches more.

At times, Florence was moving forward no faster than a human can walk, and it has remained such a wide storm that its counter-clockwise winds keep scooping up massive amounts of moisture from the sea. The flooding began on barrier islands in North Carolina and then spread into coastal and river communities there and in South Carolina, swamping the white sands and golf courses in North Myrtle Beach.

For people living inland in the Carolinas, maximum peril could come days later as all that water drains, overflowing rivers and causing flash floods.

Authorities warned, too, of risks of mudslides and environmental disasters from floodwaters washing over industrial waste sites and hog farms.

About 9,700 National Guard troops and civilians were deployed with high-water vehicles, helicopters and boats.

Florence could become a major test for the Federal Emergency Management Agency, which was heavily criticized as slow and unprepared last year for Hurricane Maria in Puerto Rico, where the death toll was put at nearly 3,000.

The hurricane center said the storm will eventually break up over the southern Appalachians and make a right hook to the northeast, its rainy remnants moving into the Mid-Atlantic states and New England by the middle of next week.

Meteorologist Ryan Maue, of weathermodels.com, calculated that Florence could dump a staggering 18 trillion gallons of rain over a week on North Carolina, South Carolina, Virginia, Georgia, Tennessee, Kentucky and Maryland. That's enough to fill the Chesapeake Bay or cover the entire state of Texas with nearly 4 inches of water.

North Carolina alone is forecast to get 9.6 trillion gallons, enough to cover the Tar Heel state to a depth of about 10 inches.

In Jacksonville, North Carolina, next to Camp Lejeune, firefighters and police fought wind and rain as they went door to door to pull more than 60 people out as the Triangle Motor Inn began to crumble.

Ashley Warren and boyfriend Chris Smith managed to paddle away from their home in a boat with their two dogs and were left shaken.

"Honestly, I grew up in Wilmington. I love hurricanes. But this one has been an experience for me," she said. "We might leave."