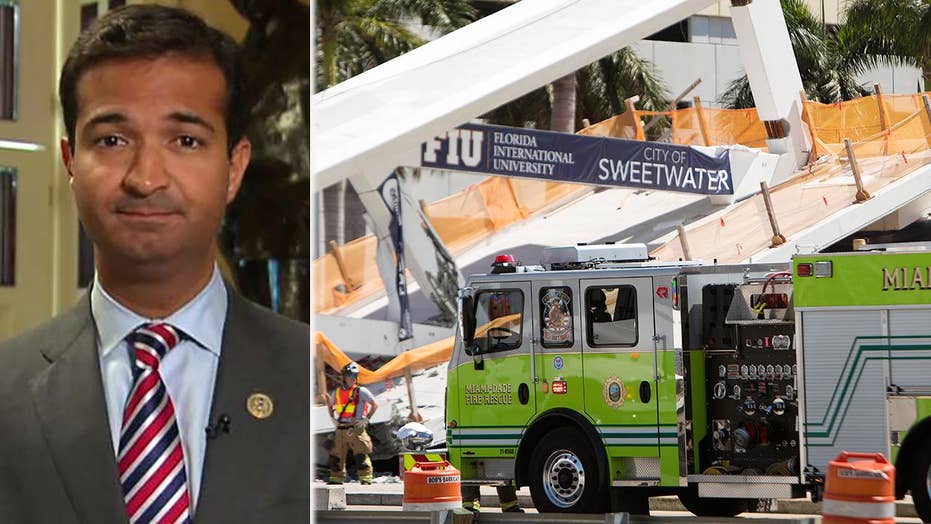 A bridge collapse Thursday at Florida International University left at least four people dead, officials said. Florida Highway Patrol confirmed to Fox News that there were multiple fatalities after the "Instant Bridge" collapsed just before 2 p.m. at the Miami-area university. Eight vehicles were trapped under the wreckage.

Local, state and national politicians and lawmakers were soon responding to the news, calling for prayers and saying they were closely monitoring the situation as it developed.

"Continuing to monitor the heartbreaking bridge collapse at FIU - so tragic," the president tweeted Thursday night. "Many brave First Responders rushed in to save lives. Thank you for your courage. Praying this evening for all who are affected."

"Saddened by the news of the bridge collapse at @FIU," Vice President Mike Pence tweeted shortly after Trump. "Our prayers are w/ the victims & their loved ones. @SecElaineChao has been in contact w/ elected officials & @NTSB is sending a team to investigate. @POTUS & I will continue to monitor developments closely."

Florida Gov. Rick Scott said he spoke "with Miami-Dade County Police Chief Juan Perez about the pedestrian bridge collapse at FIU," adding that he would "be in constant communication with law enforcement throughout the day."

A tax cut highlight event that Scott was slated to participate in was canceled in light of the news.

"My heart goes out to the victims and the families affected by this tragic bridge collapse," Florida Senator Bill Nelson tweeted. Nelson said he asked "Sec. of Transportation (Elaine) Chao to start an immediate investigation and assist the university as it is going through this tough time."

"Terrible news coming from Miami as a pedestrian bridge has collapsed at @FIU and multiple deaths are reported," Florida Senator Marco Rubio tweeted. "We will pray for the victims and the entire Panther community."

Rubio, who said he was an adjunct professor at the school for 10 years, labeled the collapse a "horrifying tragedy."

"Shocked and distraught by the horrific SW 8 Street bridge collapse," Florida Rep. Mario Diaz-Balart tweeted. "Praying for the victims, and for our first responders who are searching for survivors." Balart said that he was contacted by Chao and said he was "grateful" for her "concern and support at this time."

"My staff is on the ground to assist with federal coordination and will continue to be available to any constituents affected and in need of support," Florida Rep. Carlos Curbelo tweeted. "As soon as immediate needs have been met, we need to get to the bottom of what happened today and ensure it never happens again."

"Sending my thoughts to everyone affected by today's bridge collapse in Miami, and eternally grateful for the courage and heroism of our first responders, who continually put themselves in harm's way for the sake of their neighbors," Democratic National Committee Chairman Tom Perez tweeted.