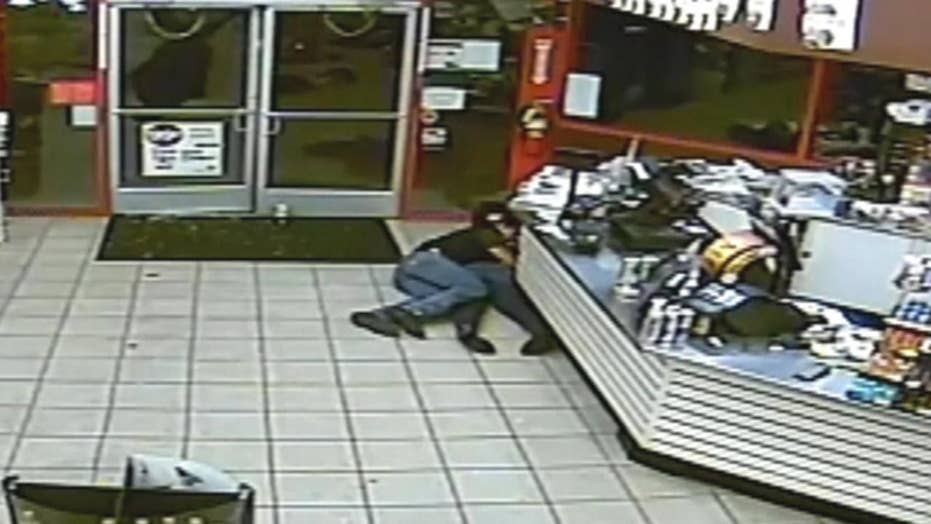 Quick-thinking firefighter Enrico Trujillo protected a female customer when gunfire erupted outside of a convenience store.

An off-duty firefighter and another bystander are being hailed as hero after new surveillance footage shows them shielding women and children at a New Mexico convenience store as gunfire rang out.

Enrico Trujillo was at Giant gas station in Espanola in June when gunmen opened fire outside the store. He told KRQE-TV on Sunday he was just doing his job when he jumped to protect his friend.

“I didn't have time to react or think about anything else,” Trujillo said.

Trujillo recalled seeing two people fighting and then a crowd outside the gas station. He then noticed a kid walking back to a vehicle to retrieve a gun and someone opened fire.

“We heard gunshots go off. She ran back in the store in front of me and my first instinct was just to cover her,” he said, adding he lay on top of his friend and then they both ran to the back of the store.

Trujillo said he didn’t think twice about jumping into action.

“Here at work we are always watching out for one another and one of our main duties is to preserve life and property. So I take that seriously,” he told the station.

Another man, who has not been identified, was seen in the footage shielding two children and another woman from the gunshots.

“Without hesitation, this man protect three lives. Thank you sir for your bravery,” the police department said in a Facebook post.

No one was injured in the shooting and two men were arrested in connection to the incident, according to KRQE-TV.