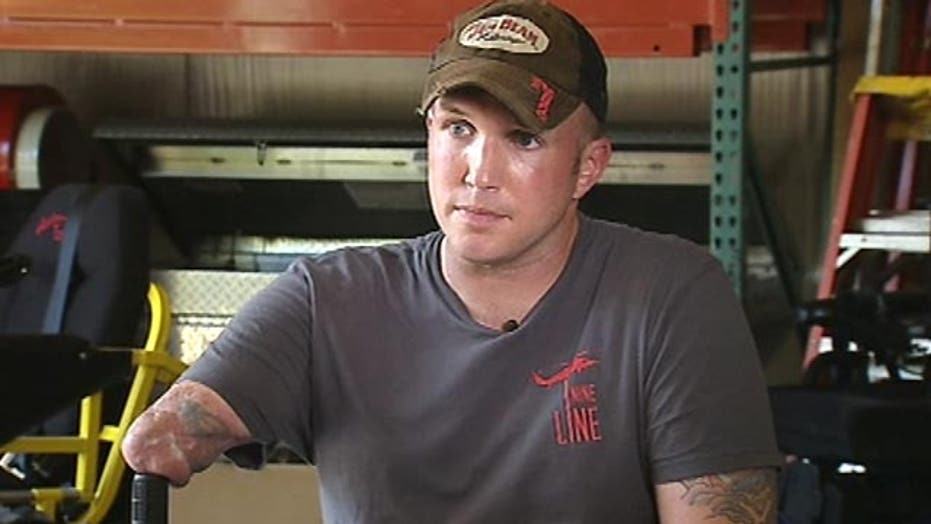 A fire raced through the Maryland home of a celebrated wounded warrior Thursday night who lost three limbs serving in Afghanistan, leaving him and his family injured but grateful to be alive.

Capt. Edward “Flip” Klein and his wife Jessica were inside their home in the Washington, D.C., suburb of Laytonsville when the smoke detector sounded. The house quickly became engulfed in flames as they made their way to the front door, where a neighbor pulled them to safety, according to Montgomery County Fire and Rescue officials.

Both were taken to an area hospital and were treated for smoke inhalation.

“We're alive. I can't talk due to smoke inhalation, but my boys and I are safe...even if we are a little devastated,” wrote Jessica Klein in a message on a Facebook page for Flip. “Thanks for the prayers and well wishes. I promise to answer all of your voicemails, texts and messages as soon as I figure out which way is up.”

Klein is a former Army captain who was serving in Afghanistan when he was a victim of an IED attack that left him a triple amputee. He was leading a foot patrol in the Kandahar Province in 2012 when he stepped on a mine that caused him to lose both legs and his right arm.

His story of recovery has been widely reported on, including by Fox News, as he defied predictions by doctors who said he would never walk again.

He has already taken steps with the aid of prosthetics and has even participated in a 5K run last October one year after the explosion.

The home was leveled by the blaze, which was believed to have started in the garage. The cause was not immediately clear. Donations to help Klein and his family can be made through The Independence Fund or the Gary Sinise Foundation.