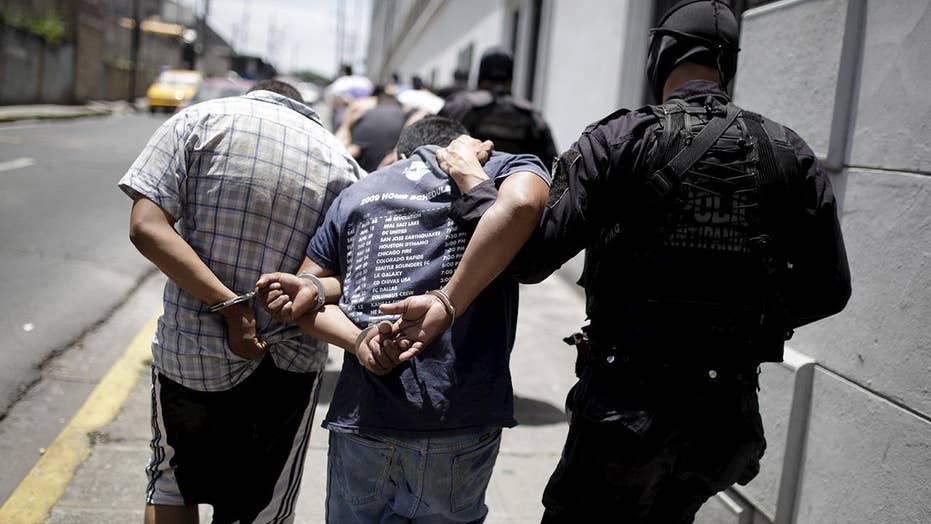 MS-13: How to combat gang violence and protect Americans

President Donald Trump has vowed to crack down on MS-13. What are local communities across the country doing to protect American citizens from gang violence?

Standing in a room full of law enforcement officials, in a town plagued by and feeling dejected about recent gang violence, President Trump last week railed against the transnational MS-13 gang.

Brentwood, N.Y., has experienced firsthand the devastation MS-13 can leave in its wake. The gang is responsible for at least 17 murders in the past 18 months in Suffolk County, Long Island – including the brutal killings of two teenage girls in September 2016 and the vicious slayings of four young men in April.

In his speech, Trump urged law enforcement officials to be tough on suspected gang members. And in the earlier days of his presidency, Trump created by executive order a task force charged with finding ways to eliminate transnational gangs and criminal organizations.

Nationwide, the problem of MS-13 – also called Mara Salvatrucha – has bedeviled local law enforcement agencies. Here's a look at how local elected officials, who face the daily challenge of keeping their communities safe from MS-13, want to combat the gang.

The former county executive of Suffolk County, Steve Levy, said he began to see an uptick of gang violence in his half of Long Island in 2009 – about five years into his tenure.

To combat it, Levy put together a task force comprised of Suffolk County police officers and federal officers.

“There’s a great deal of synergy between local police and the feds,” Levy told Fox News. “The locals bring the block-by-block, member-by-member information that can be shared with the feds. The feds bring the resources and the strict penalties that the locals otherwise wouldn’t have at their disposal.”

The impact of MS-13 in the area “substantially diminished” as a result, he said.

Levy added he couldn’t “see a single community in the nation where a local, federal partnership would not work.”

A member of MS-13 makes his gang's sign. (Reuters)

Rosenstein spearheaded multiple joint state and federal investigations into MS-13, which resulted in the prosecution of dozens of the gang’s leaders in 2009, McCarthy said.

“We cut the head off of the gang by basically getting very lengthy jail sentences for 42 members of the leadership of MS-13,” McCarthy said.

McCarthy said it’s “essential” for police to share intelligence on MS-13 with other jurisdictions and states.

“No community standing alone … can solve the issue by themselves,” he told Fox News. “The gangs are too large, they’re too transient and they do, in fact, move from jurisdiction to jurisdiction.”

In January 2017, a 15-year-old girl from Gaithersburg, Md., – in Montgomery County – was brutally stabbed to death by MS-13 gang members. A 17-year-old MS-13 member gave the orders as the murder was filmed, reportedly with the intention of sending it back to El Salvador.

The girl, Damaris Reyes Rivas, was killed in a Virginia park, and her body was found buried under railroad ties.

MS-13 notoriously recruits young people in middle and high school, predominantly in immigrant communities, who are at a higher risk of violent retribution if they leave the gang.

McCarthy said in his county, the average age of recruitment is 13 or 14 years old. And by 16, McCarthy, said, some gang members are already giving orders for murder.

Levy suggested local governments consider establishing a gang registry, which would include known gang members who have been convicted of a crime.

MS-13’S MOST WANTED: THE VIOLENT GANGSTERS THE FEDS WANT BEHIND BARS

California established a statewide database, called CalGang, more than 10 years ago that targets gang members and notes their descriptions, tattoos, criminal associates and activities, according to its website.

The Portland Police Bureau also keeps track of alleged gang members by flagging the individuals in their database. However, people do not have to be arrested or convicted of a crime to make it onto the gang list, Oregon Live reported last year.

Testifying before the Senate Committee on Homeland Security and Governmental Affairs in May, Montgomery County Police Chief J. Thomas Manger stressed the importance of working with the immigrant community in order to weed out MS-13 members.

“Without the cooperation of immigrants who have not committed crimes, we would never be able to find and arrest MS-13 criminals,” Manger said. “The moment those victims and witnesses begin to fear that their local police will deport them, cooperation with their police then ceases. We would receive no information or intelligence about MS-13 from immigrants, even innocent members of our community who are their victims.”

In his testimony, Manger also said that social media has become a means “for gang members to target rivals, recruit, secretly communicate and thwart law enforcement efforts to gather intelligence and build cases against them.”

McCarthy suggested police use “researchers” who can monitor social media to gather intelligence about gang members and their goings on. He said the “little sons of b-----s” tend to “brag” on social media about what they’ve done.

MS-13: THE GANG THAT SCARES OTHER GANGS

“The time to wait for the body to fall on the street and then investigate has passed. We need to be proactive,” McCarthy said.

When Levy left office in 2011, he said his successor disabled the police’s partnership with federal authorities, and Suffolk County officials worked to turn the area into a so-called sanctuary for undocumented immigrants.

“The double whammy was the fact that at the same time, you had President Obama rolling out the red carpet for over 100,000 unaccompanied minors from Central and South America,” he said, adding that thousands of these young people flocked to Long Island.

“Many of us warned that this was a recipe for disaster – to have 15- or 16-year-old young men without parents to be resettled in this area. MS-13 became their family,” Levy said. “They gave them protection and material things. The result is 17 dead young people in these [...] Long Island communities, and it was all avoidable.”

“The laws are all there. All that’s needed is a will to enforce them,” he continued. “And the new federal administration has the will to do it.”

Levy also advocated for ending sanctuary city policies – which limit how much local law enforcement can cooperate with federal immigration authorities – and enforcing laws that would end federal funding to cities with these policies, such as Kate’s Law.