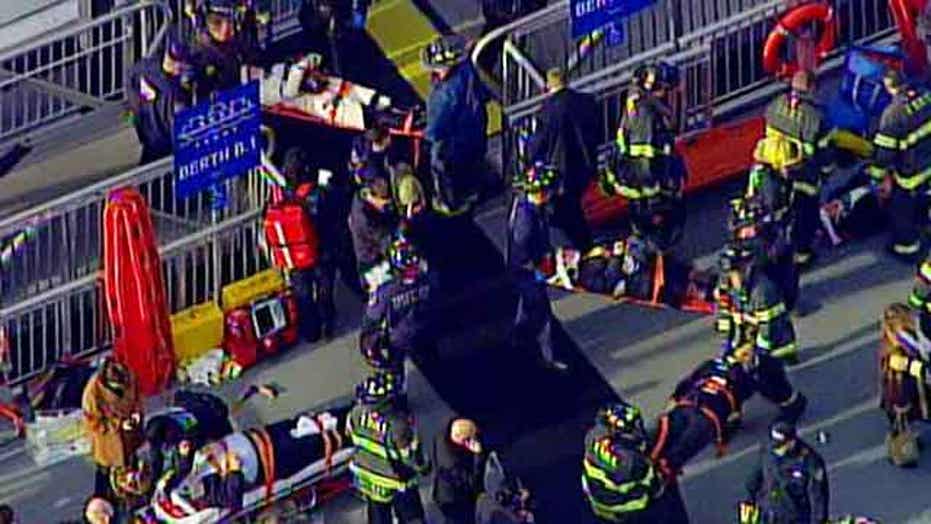 At least 50 people were injured, two critically, after a commuter ferry slammed into a dock Wednesday morning in Lower Manhattan.

The Seastreak Wall Street ferry from Atlantic Highlands, N.J., banged into the mooring as it arrived at South Street around 8:45 a.m. Wednesday. One person is in critical condition with head injuries.

Those on board said passengers were waiting to disembark and were hurled on the deck after the impact.

A passenger, Ellen Foran of Neptune City, N.J., said people tumbled on top of one another, hysterical and crying.

"We were pulling into the dock. The boat hit the dock. We just tumbled on top of each other. I got thrown into everybody else. ... People were hysterical," said Ellen Foran.

Those injured were being treated at the scene. There were no immediate details of the injuries. Reports on the number of those injured vary.

The Coast Guard said drug and alcohol tests were administered on the captain and crew as soon as the injury count concludes. The alcohol tests have come back negative. Results for the drug tests may take weeks.

A corner of the ferry is ripped open like a tin can.

Fire fighters were seen setting up a temporary staging area on the dock with stretchers and other medical equipment and some passengers were being removed from the ferry on stretchers for evaluation.

More than 340 passengers and crew members were aboard the ferry from New Jersey, one of many that carry commuters to the island of Manhattan.

Dee Wertz was on shore waiting for the ferry and saw the impact.

"It was coming in a little wobbly," Wertz said. "It hit the right side of the boat on the dock hard, like a bomb."

After the impact, the boat was able to dock normally. Wertz said passengers raced off once the ramp came down.

"I think people just wanted to get the heck off the boat as soon as they could," she said.

Ferry company officials were at the scene. The company confirms the ship's propulsion system was recently upgraded, but it is unclear if that was the cause of the accident.

Ferries are a fairly common way to commute to work in Manhattan, an island separated from New Jersey and the rest of New York City by several rivers.