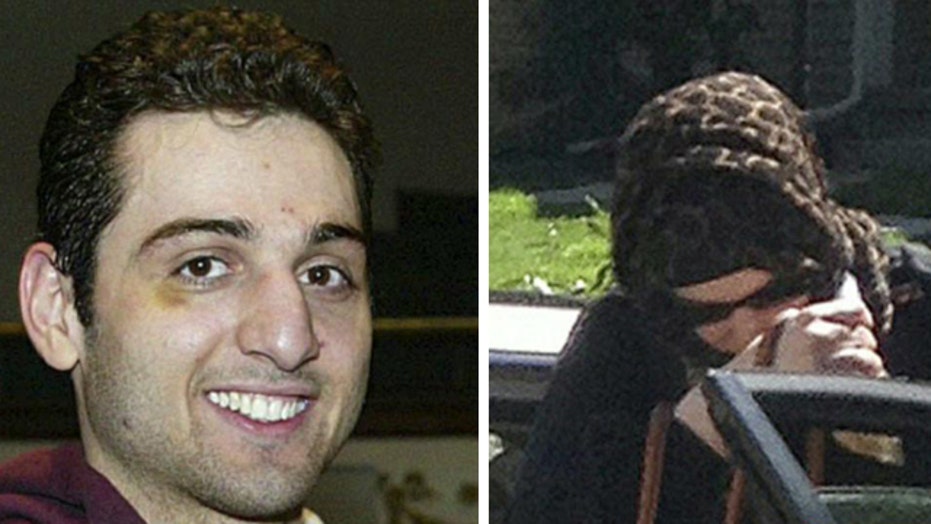 Federal investigators want to speak with the widow of Boston Marathon bombing suspect Tamerlan Tsarnaev, a Muslim convert and mother of their 3-year-old daughter, according to the Rhode Island woman’s attorney.

Investigators went to the suburban Rhode Island home of Tsarnaev's in-laws Sunday evening, where Katherine Russell Tsarnaev, 24, has been staying. Lawyer Amato DeLuca told The Associated Press that she did not speak with them and they are discussing how to proceed.

"I spoke to them, and that's all I can say right now," DeLuca said. "We're deciding what we want to do and how we want to approach this."

DeLuca also provided new details on Tsarnaev's movements in the days following the bombings, saying the last day he was alive that "he was home" when Russell left for work. When asked whether anything seemed amiss to his wife following the bombings, DeLuca replied: "Not as far as I know." He said she learned her husband was a suspect in the bombings by seeing it on television and did not elaborate.

DeLuca said Russell did not suspect her husband of anything, and that there was no reason for her to have suspected him. He said she had been working 70 to 80 hours, seven days a week as a home health care aide. While she was at work, Tsarneav, 26, cared for their toddler daughter, DeLuca said.

"When this allegedly was going on, she was working, and had been working all week to support her family," DeLuca told The Associated Press, adding that Dzhokhar Tsarnaev, 19, was off at college and she saw him "not at all" at the apartment they shared with her mother-in-law.

On Friday, the woman’s mother handed reporters a statement referring to the “horrible tragedy” that occurred at the Boston Marathon on April 15, killing three people and injuring 176 others.

"Our daughter has lost her husband today, the father of her child,” the statement read. “We cannot begin to comprehend how this horrible tragedy occurred. In the aftermath of the Patriots' Day horror, we know that we never really knew Tamerlane [sic] Tsarnaev. Our hearts are sickened by the knowledge of the horror he has inflicted. Please respect our family's privacy in this difficult time."

Russell, according to reports, was “totally transformed” by Tsarnaev after meeting him. By age 21, she had married him and borne his daughter, Zahara, who is now 3 years old, the Daily Mail reports. She also converted to Islam and underwent a change so profound that few friends truly understood the sizable shift.

“I saw her like a few months ago and she was just totally transformed,” one former classmate told the newspaper. “She was not the same person at all.”

Another former classmate said the “All-American” girl had been “brainwashed” by her super-religious husband.

“Nobody understands what happened to her,” she told the newspaper of Russell. “None of us would have dreamed that she would marry so young or drop out of college and have a baby or convert or be part of any of what’s happened … She’s just not the same person at all.”

In 2004, Katherine Russell began studying at North Kingstown High School, where she was a member of the dance team and was recognized for a drawing of a cat in 11th grade. She also competed with fellow classmates during the school’s class color day.

“The thing that’s so shocking is that there was nothing at all that made Katherine different,” another classmate told the Daily Mail. “Her parents are nice people, her sisters are great girls. But she met this guy, I guess, and everything changed.”

Russell later met Tsarnaev while she was a student at Boston’s Suffolk University. Soon thereafter, she converted and her priorities seemingly changed, as she left the school in 2010 without graduating. Months earlier, in July 2009, Tsarnaev was arrested for allegedly assaulting Russell, who described Tsarnaev to authorities as a “very nice man,” the newspaper reports.

Russell, in her high school yearbook, provided a quotation that would seemingly coincide with the extremist views of her late husband.

“Don’t take anything for granted,” Russell wrote, before quoting a line from David Bowie's Quicksand. “Don’t believe in yourself, don’t deceive with belief … Knowledge comes from death’s release.”

Neighbor Patricia Gillette told Fox News she had only seen the couple's daughter playing in the family's backyard a few times.