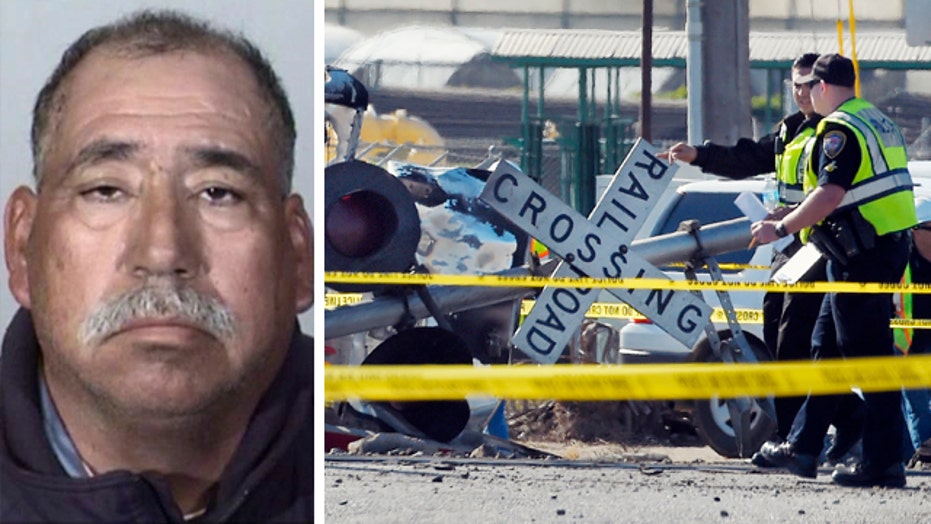 Investigators say the truck was not stuck on the tracks

Federal investigators said Wednesday that they are trying to determine why a pickup truck driver drove on to tracks and abandoned his truck, leading to a train crash that left three cars derailed and dozens injured in Southern California.

"It was not stuck, it was not bottomed out on the track or something like that," National Transportation Safety Board member Robert Sumwalt said at a media briefing late Tuesday at the crash site in Oxnard. Officials had said immediately after the crash that the driver got stuck on the tracks.

"We're very concerned about that, we're very interested in it," he said.

— NTSB member, when discussing the cirumstances leading up to the crash

The badly wrecked truck's emergency brake was in the on position and its headlight switch was in the high-beams position after the pre-dawn crash, Sumwalt said.

Eight people were admitted to the hospital of the 30 people who were originally examined, officials said. Four were in critical condition, including the train's engineer.

The driver, Jose Alejandro Sanchez-Ramirez, 54, of Yuma, Arizona, was found 1.6 miles away and 45 minutes later, said Jason Benites, an assistant chief of the Oxnard Police Department.

Police said they tested Sanchez-Ramirez for drugs and alcohol but they would not discuss the results. He was briefly hospitalized then arrested Tuesday afternoon on suspicion of felony hit-and-run, Benites said. The Los Angeles Times reported that he was being held on $150,000 bail and has a court appearance on Thursday.

His Ford F-450 pickup, which was pulling trailer equipment and welding tools, was pushed some 300 feet down the tracks and ended up on the other side of the rail crossing, Sumwalt said.

The truck was badly wrecked, but investigators said the engine was intact may give clues as to what happened.

Sumwalt said his team had already recovered video and data recorders from the train and were sending them to Washington for analysis. The federal agency doesn't always investigate grade crossings, especially those with no fatalities, but this one was unusual enough to warrant it, Sumwalt said.

"It's not your typical grade crossing accident," he said.

Passenger Joel Bingham, a railroad aficionado and frequent passenger, said many of those aboard the train were asleep and shocked awake when the loud boom first happened.

In this Tuesday, Feb. 24, 2015, photo Police officers stand near a Metrolink train that hit a truck, leftt, and then derailed at a railroad crossing in Oxnard, Calif. Three cars of the Metrolink train tumbled onto their sides, injuring dozens of people in the town 65 miles northwest of Los Angeles. Engineers have figured how to blunt the deadly force of a train smashing into a truck on the tracks. Yet few U.S. rail systems have adopted the technology, which is believed to have played a significant role in the remarkably low number of serious injuries from Tuesdays commuter rail crash. (AP Photo/Mark J. Terrill)

"It seemed like an eternity while we were flying around the train. Everything was flying," Bingham said. "A brush of death definitely came over me."

Bingham said the lights went out when the train fell over. He was banged up from head to toe but managed to find an escape for himself and others, many of whom had been asleep when the crash happened.

"I was just shaking," he said. "I opened the window and told everybody, `Come to my voice."'

Lives were likely saved by passenger cars designed to absorb a crash, Metrolink officials said. They were purchased after a deadly collision a decade ago. The four passenger cars remained largely intact, as did the locomotive.

The train, the first of the morning on the Ventura route, had just left its second stop of Oxnard on its way to downtown Los Angeles, about 65 miles away, when it struck the truck around 5:45 a.m.

One patient described how he had been working on his laptop and a moment later there was a sudden jerking motion that happened so quickly he wasn't able to grab hold of anything, said Dr. Bryan Wong, chief medical officer at Ventura County Medical Center. He was violently tossed against a wall of the train.

The train typically would be accelerating out of the Oxnard station past verdant farm fields at about 55 mph, Metrolink spokesman Scott Johnson said. With braking, he estimated it would have hit the truck at between 40 mph and 55 mph.