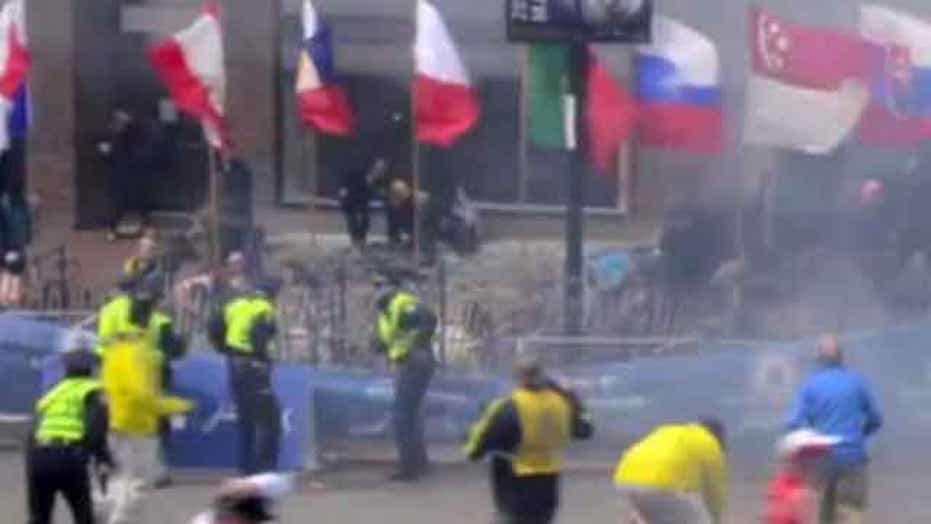 The FBI and state and local police are intensifying their probe into Monday's bombing at the finish line of the Boston Marathon, vowing a "worldwide investigation" and appealing to the public for tips and cellphone pictures that might yield clues about who was behind the horrific attack.

"At this time there are no claims of responsibility," FBI officials said in a press conference Tuesday. "The range of suspects and motives remains wide open."

New details are slowly emerging in the attack, which killed three and injured at least 176. Two bombs went off just before 3 p.m., shattering a festive atmosphere several hours after the legendary race began on the city's 238th annual Patriots' Day. Officials have determined the bombs were placed in a black nylon bag or backpack. Pieces of the bag recovered have been sent to a FBI lab for forensic testing.

An intelligence bulletin issued to law enforcement and released late Tuesday includes a picture of a mangled pressure cooker and a torn black bag, like the one seen below that was first obtained by MyFoxAtlanta.com, that the FBI says were part of a bomb.

"This will be a worldwide investigation," Special Agent-in-Charge of the FBI's Boston Field Office Richard DesLauriers said at a conference, adding that investigators will go "wherever the leads take us."

"We will go to the ends of the Earth to identify the suspects responsible for this despicable crime," he added.

DesLauriers urged anyone who may have seen someone carrying a heavy black bag near the scene of the explosion to come forward.

It remained unclear if the bombs were the work of a homegrown or foreign threat, but in Washington, both President Obama and Secretary of Defense Chuck Hagel called the attack terrorism.

“Any time bombs are used to target innocent civilians, it is an act of terror,” Obama said Tuesday morning.

Boston Police Commissioner Ed Davis appealed to the public to come forward with any information or photographic evidence that might help authorities zero in on the killers.

"We’re looking to bring the individuals responsible for this heinous crime to justice," he said.

Massachusetts Gov. Deval Patrick said the two bombs were the only explosive devices found in the area, discounting prior reports that more unexploded devices had been discovered.

Authorities had searched an apartment in the nearby Boston suburb of Revere as part of the investigation into the explosions. But the individual in question, who was initially considered a "person of interest," has now been ruled out as a suspect, sources confirmed to Fox News.

The Pakistani Taliban, which has threatened attacks in the United States because of its support for the Pakistani government, denied any role in the marathon bombings Tuesday.

The group's spokesman, Ahsanullah Ahsan, denied involvement in a telephone call with The Associated Press. He spoke from an undisclosed location.

Federal investigators said Monday no one had claimed responsibility for the devastating attack on one of the city's most famous civic holidays, Patriots' Day.

Eight-year-old, Martin Richard, who was waiting for his father to finish the race is among those dead. The boy's 6-year-old sister lost a leg in the attack and his mother suffered a brain injury.

Krystle Campbell, of Medford, Mass., 29, was also killed in the blast. Her father said she had gone with her best friend to take a picture of the friend's boyfriend crossing the finish line.

William Campbell said his daughter, who worked at a restaurant in nearby Arlington, was "very caring, very loving person, and was daddy's little girl." He said the loss has devastated the family.

At Massachusetts General Hospital, Alasdair Conn, chief of emergency services, said: "This is something I've never seen in my 25 years here ... this amount of carnage in the civilian population. This is what we expect from war."

The first two explosions occurred at 2:50 p.m. – nearly five hours after the marathon began – about 50 to 100 yards apart, according to Davis. A third explosion occurred near the John F. Kennedy Presidential Library and Museum in the Columbia Point section of Dorchester, several miles southeast of the marathon's finish line, at around 4:15 p.m. Police could not say if it was related to the earlier explosions.

The horror unfolded as the city marked the anniversary of the Battles of Lexington and Concord at the beginning of the Revolutionary War. Competitors and race organizers were crying as they fled the bloody chaos, while some witnesses reported seeing victims with lost limbs.

"Somebody's leg flew by my head," a spectator, who gave his name as John Ross, told the Boston Herald. “I gave my belt to stop the blood.”

Twenty-six people were transported to Brigham and Women's Hospital, including a 3-year-old, who was then taken to a children's hospital. A doctor at the hospital said at least two of the patients there are in critical condition and that some have burns and injuries that will likely require amputations.

"They just started bringing people in with no limbs," said runner Tim Davey of Richmond, Va. He said he and his wife, Lisa, tried to shield their children's eyes from the gruesome scene inside a medical tent that had been set up to care for fatigued runners, but "they saw a lot."

"They just kept filling up with more and more casualties," Lisa Davey said. "Most everybody was conscious. They were very dazed."

Witnesses heard booms that sounded like two claps of thunder near the finish line inside the Fairmount Copley Plaza Hotel, according to multiple local reports. Video of the scene showed a number of emergency crews in the area tending to victims and blood on the ground near the finish line.

"I saw two explosions. The first one was beyond the finish line. I heard a loud bang and I saw smoke rising," Boston Herald reporter Chris Cassidy, who was running in the marathon, told the newspaper. "I kept running and I heard behind me a loud bang. It looked like it was in a trash can or something...There are people who have been hit with debris, people with bloody foreheads.”

"There are a lot of people down," said one man, whose bib No. 17528 identified him as Frank Deruyter of North Carolina. He was not injured, but marathon workers were carrying one woman, who did not appear to be a runner, to the medical area as blood gushed from her leg. A Boston police officer was wheeled from the course with a leg injury that was bleeding.

About three hours after the winners crossed the line, there was a loud explosion on the north side of Boylston Street, just before the photo bridge that marks the finish line. Another thunderous explosion could be heard a few seconds later.

"There are people who are really, really bloody," McLean said. "They were pulling them into the medical tent."

Cherie Falgoust was waiting for her husband, who was running the race.  "I was expecting my husband any minute," she said. "I don't know what this building is ... it just blew. Just a big bomb, a loud boom, and then glass everywhere. Something hit my head. I don't know what it was. I just ducked."

Authorities in New York, meanwhile, are deploying counterterrorism vehicles around landmark sites in Manhattan, including prominent hotels, according to the New York City Police Department.

Nearly 25,000 people, including runners from around the world, competed in Boston's celebrated 26.2-mile race, attracting huge throngs of onlookers, especially near the finish line.

Anyone with information on the bombings is being urged to call Boston authorities at 1-800-494-TIPS.