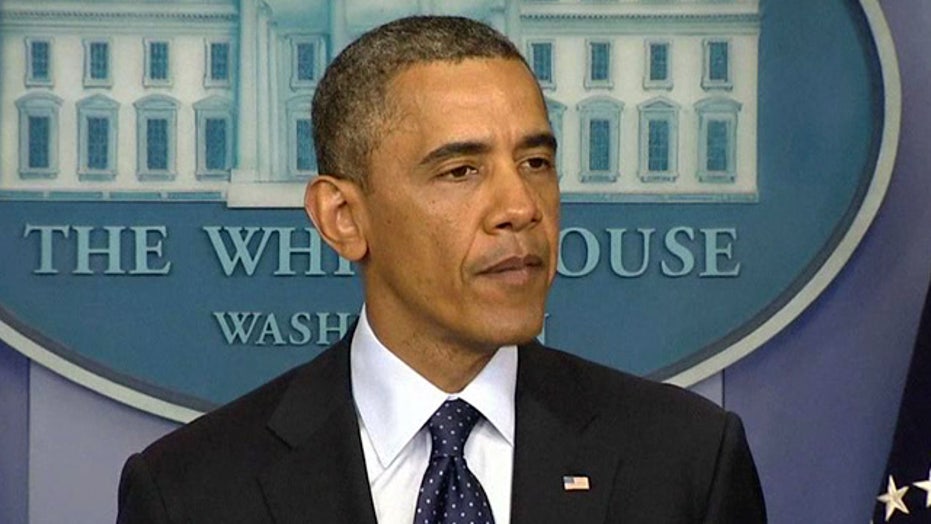 President Obama said Monday that officials do not know who is behind the attack on the Boston Marathon, but vowed that those responsible will "feel the full weight of justice."

The president assured that the administration is mobilizing its "full resources" to help investigate and provide security.

"The American people will say a prayer for Boston tonight," Obama said.

The president addressed the nation from the White House briefing room just hours after the explosion. Though Obama did not use the word "terror," officials separately told Fox News that the White House does believe this was a terror attack.

Officials tell Fox News that Obama has been in touch with Massachusetts officials regarding the fatal attack and has directed his administration to provide "whatever assistance is necessary."

Reflecting the very preliminary stage of the investigation, Obama said authorities do not know who was behind the explosion.

"We still do not know who did this or why, and people shouldn't jump to conclusions before we have all the facts," he said. "But make no mistake, we will get to the bottom of this. ... We will find out who did this, and we will hold them accountable."

A White House official said the president called Boston Mayor Tom Menino and Massachusetts Gov. Deval Patrick earlier Monday to "express his concern for those who were injured and to make clear that his administration is ready to provide needed support as they respond to the incident."

Details of the explosion, which ripped through the crowded finish line at the Boston Marathon, are still emerging. Authorities say at least three are dead and more than 140 injured.

Authorities were guarding a person of interest at a local hospital, sources told FoxNews.com. The person, who sources said is 20 years old, had severe burns, but authorities had not determined whether the person is a victim or a suspected perpetrator.

The Boston police commissioner claimed no "suspect" is currently in custody.

Attorney General Eric Holder has also spoken with Mueller and has likewise directed the "full resources" of the Justice Department to be deployed, a spokesperson said.

Vice President Biden, during a conference call on gun violence, said "our prayers are with those people in Boston who suffered injury."

Mitt Romney, former governor of Massachusetts and 2012 Republican presidential nominee, tweeted: "Our hearts are heavy with the news out of Boston today."