Former homicide detective Brian Foley weighs in on "Your World" about how Idaho investigators are handling the slayings of four college students and what they could be looking for in their investigation.

The father of slain University of Idaho student Kaylee Goncalves said in an interview Tuesday that the initial 911 call may have come in as an unconscious person report because his daughter wasn’t answering her phone.

"I know the girls reached out via texting and calling, so I can only assume by the phones being ignored, knowing how my daughter is not going to ignore calls and texting," Steve Goncalves told ABC News.

He also disclosed publicly for the first time that his daughter and her best friend, Madison Mogen, used a sorority designated driver service to get them from the Grub Truck downtown to their home at about 1:56 a.m. the day of the massacre.

Two female roommates, who lived in the home's basement level, summoned friends, fearing that one of the victims had passed out.

A 911 call came in at 11:58 a.m. requesting aid for an unconscious person, which was placed on one of the surviving roommate's phones, according to police. The coroner said the victims were ambushed in their sleep and each stabbed multiple times.

Goncalves said he was first informed of his daughter and Mogen's deaths by family on campus, not police. "You can't imagine sending your girls to college, and then they come back in an urn," he said. "You can't absorb that amount of pain and agony."

Kaylee Goncalves was set to graduate in December and had a marketing job lined up in Austin, Texas.

IDAHO STUDENT MURDERS: POLICE SHOOT DOWN MORE RUMORS, BUT STILL NO ANSWERS AS KILLER REMAINS ON THE LOOSE

He added that at least the killings were "fast and nobody suffered and nobody felt like that kind of pain." 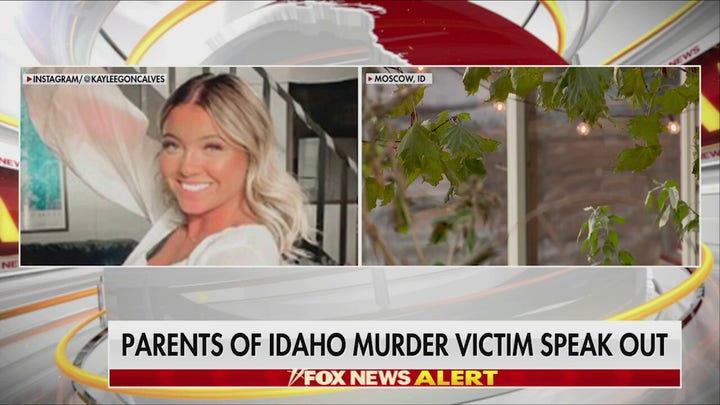 Goncalves said he supports the police who are working hard to solve the grisly killings but is frustrated by the lack of transparency.

"I have to assume and hope that this is all part of their plan," he told ABC News. "I know that there's some really good, hard-working guys and girls that are on this case that I've met. And they looked me in the eyes and they told me straight-out that they're working and they're doing everything in their power."

The family's grief has been compounded by not knowing who is responsible for the horrific murders.

"I haven't earned the ability to grieve the way that I want to grieve," Goncalves said. "I want to be able to have justice first."

He added, "My wife's biggest fear, part of the reason we didn't have a funeral, is because she couldn't be guaranteed that that monster was going to not be there."