Officials are pleading with the public to stand with the family of a Philadelphia man who was fatally shot by police last month by abstaining from any destruction or violence against the city in the wake of the release of the body camera footage and 911 calls made prior to his death.

Philadelphia District Attorney Larry Krasner asked the public on Wednesday to protect each other from “violence in the street,” and from damage and looting at local businesses as tensions come to a head amid both election concerns and the release of the audio and video footage in connection with 27-year-old Walter Wallace Jr.’s death. 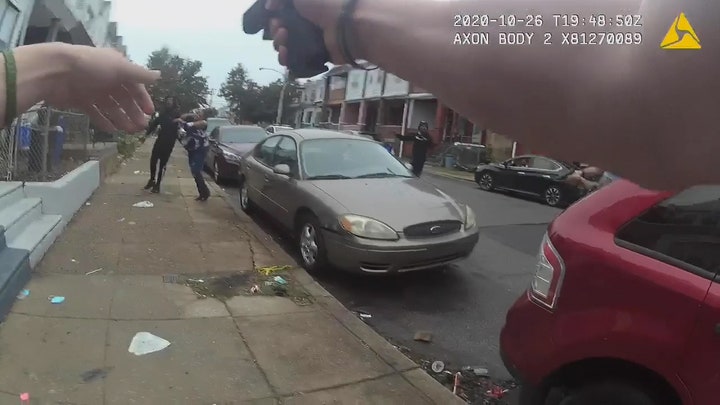 "What we need is the public who view this, who feel passionately about this, to feel just as passionately about protecting this family and honoring the memory of Walter Wallace by not tearing up the city,” Krasner said during a Wednesday evening press conference related to the footage. “If you believe the life of Walter Wallace matters, then it matters that his family is asking you to honor him, not to disgrace his memory by tearing up the city.”

Wallace, a Black man armed with a knife, was shot and killed shortly before 4 p.m. Oct. 26 in Philadelphia’s Cobbs Creek neighborhood. He was struck in the shoulder and chest, and taken to the hospital in a police car, but could not be saved, officials previously said.

Officials have said Wallace ignored orders to drop a knife and charged at police. The officers, who were identified as 25-year-old Sean Matarazzo, and Thomas Munz, 26, were not equipped with Tasers at the time.

Krasner vowed Wednesday to make his own decision about whether to charge the pair of officers in the shooting death of Wallace Jr. and not to rely solely on the police investigation.

Police Commissioner Danielle Outlaw said neither officer had more than three years of experience in the department.

She pledged to put reforms in place by late next year that include more de-escalation training for officers and better coordination with mental health specialists.

A lawyer for the family has said they do not want the officers charged with murder because they believe they lacked the proper training and equipment.

People stand near the scene of a police shooting in Philadelphia, Monday, Oct. 26, 2020, after police officers fatally shot a man during a confrontation. (Tom Gralish/The Philadelphia Inquirer via AP)

“When you come to a scene where somebody is in a mental crisis, and the only tool you have to deal with it is a gun ... where are the proper tools for the job?” lawyer Shaka Johnson said last week.

The officers fired an estimated 14 shots. It was not clear how many struck Wallace.

The day after Wallace’s death, his father, Walter Wallace Sr., condemned any violence made in the name of justice for his son.

“I don’t condone no violence, tearing up the city, looting of the stores,” he told reporters. “I would feel like everybody having respect for my family and my son to stop this violence and chaos that’s going on in this city with people that have businesses.”

He asked people to stop the violence "to help my son and help my family.”

A woman cleans up debris at a Walmart, Wednesday, Oct. 28, 2020, that was damaged in protests in Philadelphia. (AP Photo/Michael Perez)

“That all I’m sending out is an SOS, to help, not to hurt and cause no chaos, violence, looting, firing,” Wallace Sr. continued. “I wasn’t brought up like this and I worked 33 years with the city, with the street department picking up trash to try to keep this city clean.”

Following Wallace’s shooting, more than 90 people were arrested and about 50 police officers injured in clashes with protesters and vandals, including the 1,000 or so who suddenly swarmed a shopping center the following night, breaking windows and stealing merchandise. That scene erupted on the other side of the city, miles from Wallace’s neighborhood, where protests were underway.

On Wednesday, pastors joined city leaders in pleading with protesters and others outraged by the police killing to remain peaceful.

The pastors said Wallace's family does not want his memory marred by more store break-ins and violence.

Later that evening, two protests – one related to the “Count Every Vote” election movement and the other connected with the release of the Wallace Jr. footage – converged.

Police said there were not protest-related arrests, injuries or major incidents.