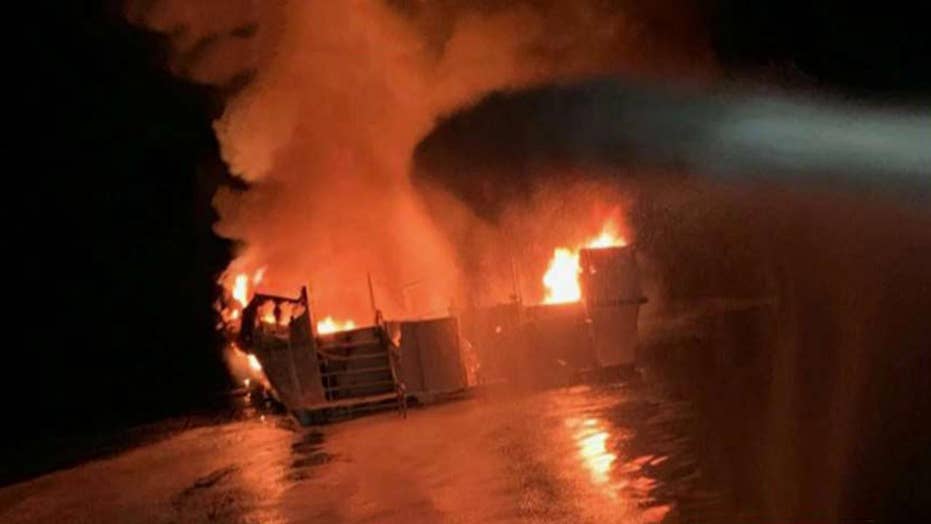 The search and rescue mission for survivors of the deadly fire aboard the dive boat Conception is now a recovery effort; national correspondent William La Jeunesse reports from Santa Barbara.

A family of five celebrating their father's birthday with a weekend diving excursion are believed to be among the 34 presumed dead in a boat fire off the coast of Southern California Monday, according to a report Tuesday.

Angela, Nicole and Evan Quitasol, their father Michael Quitasol and stepmother Fernisa Sison were among the 33 passengers and six crew members on the dive boat Conception when it caught fire early Monday morning near Santa Cruz Island while passengers were still asleep.

“They’re the most kind, most loving people I’ve ever met — and I’m not just saying that because they’re family,” stepfather Chris Rosas said. “The way they interacted with anyone they came across, they were wonderful. They were outstanding girls. That’s about all I can tell you right now.” The girls' mother, Susana Rosas, posted the news on Facebook Monday and thanked the community for its support.

All three girls had been bridesmaids at their sister Evita’s wedding two weeks ago.

“She loved the outdoors, loved animals, loved and lived by the sea,” Rosas said of Nicole, who lived in the beach resort town Coronado. Rosas and his wife left their home in Stockton for Santa Barbara Monday when they heard the news.

As of Tuesday, 25 bodies have been recovered and 9 are still missing. Five crew members on the deck at the time were able to jump off the boat. All 33 passengers are presumed dead.

The rescue operation was suspended Tuesday after rescuers said there were no signs of additional survivors.

A GoFundMe page has been created for the Quitasol family.