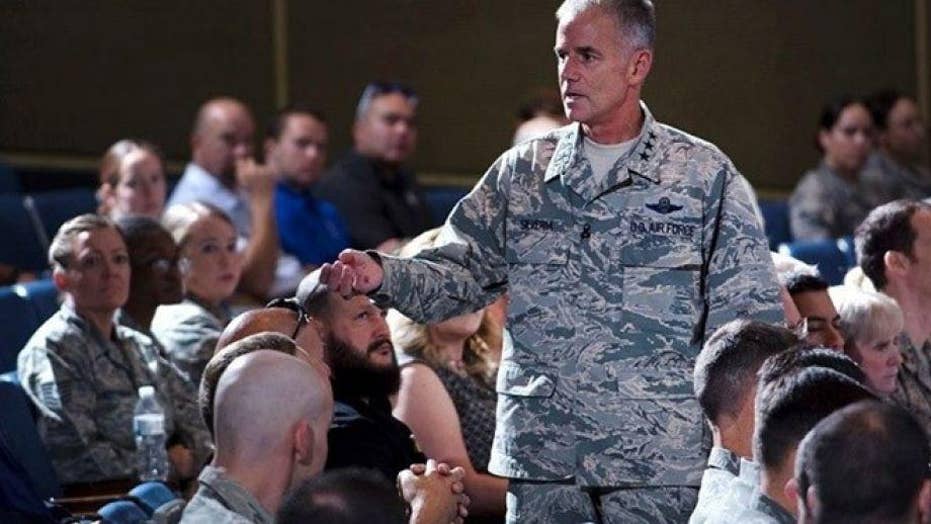 An investigation by the school concluded Wednesday that one of the cadets allegedly targeted by the remarks was responsible for writing them -- adding to a list of hate crime hoaxes nationwide, from California to Kansas and New York.

While the vast majority of hate crimes are actual hate crimes, there are also reports of phony complaints -- and the motives for such false claims vary, according to researchers.

"Hate crime hoaxes have a similar divisive effect on communities that genuine hate crimes have and therefore -- absent an extenuating circumstance -- they should be prosecuted to the full extent of the law," said Brian Levin, director of The Center for the Study of Hate and Extremism at California State University in San Bernardino.

On Monday, a Kansas man whose car was allegedly vandalized with racist threats admitted he was responsible for the graffiti, law enforcement officials said. The hateful messages found on a car in Manhattan, Kan., shocked the community of nearby Kansas State University, prompting several public events focused on race relations and diversity and assistance from the Federal Bureau of Investigation in finding the perpetrator.

The Kansas incident follows other reported hate crime hoaxes within the last year.

Sometimes we see people who do this because they want sympathy and publicity as well as to make a pointed political statement.

In June, Brian K. Telfair, a former Petersburg City Attorney, asked a city employee to buy a prepaid cellphone that he later used to make a phone call to himself, according to the Richmond Times-Dispatch, citing court records. Telfair, who is black, told authorities that the call was made by an unknown "redneck" who spewed racist threats to the city's mayor and other officials, the paper reported.

In December, a Muslim teenager from Long Island by the name of Yasmin Seweid told authorities that she was harassed on the subway by men who yelled "Donald Trump!" while trying to remove her hijab. The police said within two weeks that she admitted she was lying because she broke her curfew. She was arrested for filing a false report and later accepted a plea deal.

In November 2016, a hateful note on a white board at Elon Univeristy in North Carolina that read "Bye Bye Latinos Hasta La Vista" was actually satire written by a Latino student at the school, according to the Elon News Network.

Levin said real hate crimes slightly declined last year in Colorado -- where the academy is based -- but increased by 5 percent nationally. He said he predicts the FBI's latest report -- due next week -- will show an excess of 6,000 hate crimes throughout the U.S. and will have the first back-to-back annual increase since 2004 (The FBI's last official count in 2015 was 5,850 hate crimes nationally.).

The FBI's data, however, only consists of hate crimes that were reported to authorities. In June, a special report on hate crimes from the Bureau of Justice Statistics found that more than half of the 250,000 hate crimes that took place each year between 2004 and 2015 went unreported to law enforcement for a variety of reasons.

"We do routinely see a very small number of hate crime hoaxes but we also see hoaxes with respect to arson and auto theft and even reports of sexual assault, yet we don't say the overwhelming number of reports of those crimes are hoaxes, either," said Levin.

When they do occur, "colleges are among more common places where they happen," Levin said.

In the case of false reports, Levin noted that hoaxes are often meant to attract or divert attention or can be a political statement.

"There are a variety of recurring motives that we see in these types of reports. They include everything from insurance fraud to the diversion of attention away from some other personal misconduct," he said.

"Sometimes we see people who do this because they want sympathy and publicity as well as to make a pointed political statement."