According to a police report, a woman found a camera taped to the bottom of a baby changing station in a Starbucks restroom in Fulton County, Ga. (Associated Press)

A series of fake coupons promising free beverages for “people of color” and “African American heritage,” are reportedly making the rounds on social media.

The faux vouchers appeared to have originated on a site known for promulgating far-right content and ideas, The New York Daily News reported. 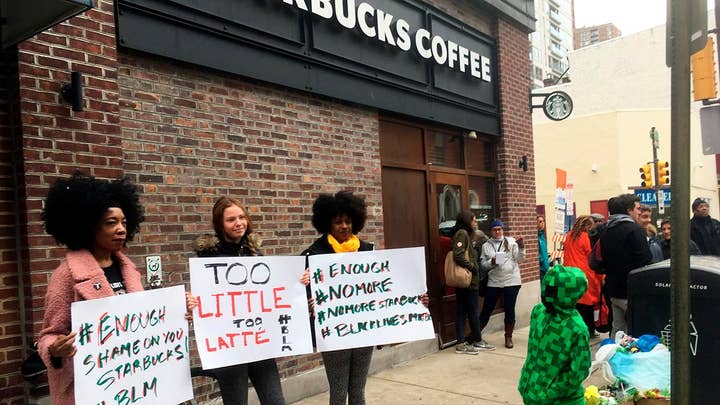 The bogus coupons appeared after an incident in which two black men were arrested at a Philadelphia Starbucks after an employee reportedly called police on the two men who refused to leave.

A video of the arrest went viral, prompting public outrage. Starbucks CEO Kevin Johnson called the incident “reprehensible” and said he had personally apologized to the two men.

The international coffee chain announced it will close 8,000 locations for one day on May 29 to provide employees with “racial-bias education geared toward preventing discrimination at our stores.”

“We’re sorry,” reads one of the fake coupons. “We know we can do better. Starbucks values all people of color, and we are working on employee sensitivity training.”

The coupon is adorned with different flavors of Starbucks’ signature frappucino beverage next to the caption: “The best dialogue starts over a cup of coffee and we’d like to buy you one.”

In this photo from April 16, 2018, demonstrators protest at a Starbucks in Philadelphia where two black men were arrested after employees said they were trespassing. (AP Photo/Jacqueline Larma)

In the left-hand corner is the Starbucks logo and a barcode with the text: “Limit 1 coupon per person … People of Color only.”

Starbucks has denied the coupons’ authenticity.

“This is completely false and in no way associated with Starbucks,” a representative for the company told Business Insider.

According to the Daily News, one of the coupons contains instructions for the barista to punch in the code, “1488,” a set of numbers associated with white supremacist groups. The coupon also includes a QR code that displays the “n-word” when scanned, the Daily News reported.