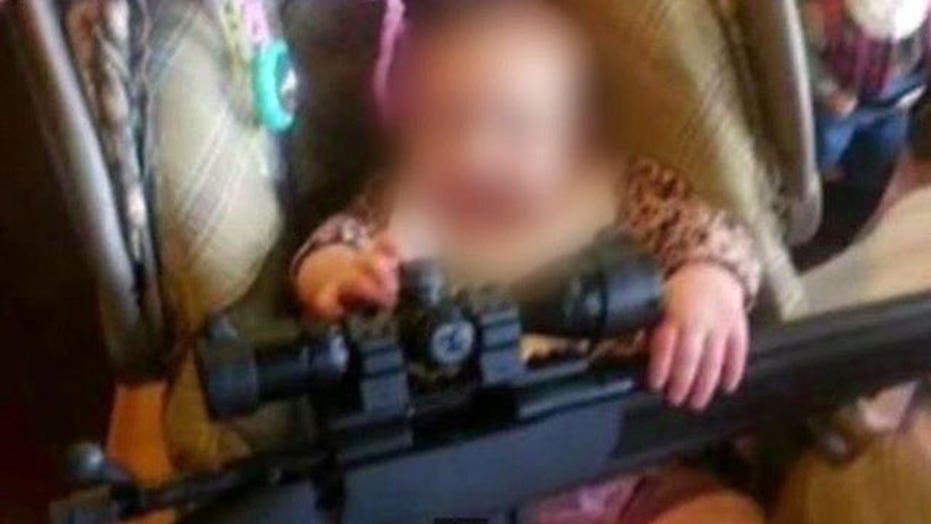 Photo of baby with rifle sparks controversy in Connecticut

Christopher Duffy never thought a Facebook photo of his 6-month-old daughter holding a rifle in a Connecticut gun shop would spark controversy.

But that’s just what happened after the photo ended up on the gun shop’s Facebook page and got sent to WTNH News 8 in New Haven, which ran a story.

The photo shows a bolt-action rifle resting on the lap of Christopher Duffy’s baby, Genevieve, as she sits in her car seat. Duffy said he snapped the picture at the Woodbridge Firearms Trading Post in Woodbridge.

“The little one actually latched onto it when I first picked it up to see how heavy it was. It’s actually very light, to test the weight, so I just decided to take the picture,” Duffy told WTNH.

While the TV station said some viewers found the photo troubling, Duffy wondered what all the fuss was about.

“If someone wants to share something with the rest of the community, I have no problem posting it on the page,” he said.

But later he took the photo down at the request of Genevieve’s family.

Bryanna Wingate of New Haven told the station what Duffy did was too much.

“After everything that happened in Connecticut with Sandy Hook and everything that’s going on with the gun laws, why would you have your baby holding a gun…a big gun?” said Wingate.

The story about Duffy’s photo generated hundreds of online comments, many in support of the dad.

“Whoever ‘Reported it’ should get a life and Channel 8 should be ashamed for making this a big deal in a state already over-run with anti-gun sentiment,” said Ron Vanjar, who posted his comment on WTNH’s website.

Others who also commented included “Lisa D” who said, “The bolt is open and it can be seen as not even being loaded much less loaded and ready to fire. Much ado about nothing.”

Another was Lenny Benedetto who said, “Gun was safe give it a rest. Kid is way cute!”

Not all agreed, though. On the gun shop’s Facebook page, Caroline Leary called the photo inappropriate.

“Seeing an infant with her hands on a barrel/scope creates a rather disturbing visual for most people,” she said. “Educate? Educate who? The baby? Firearm safety for a 6-month-old? I don't think so.”