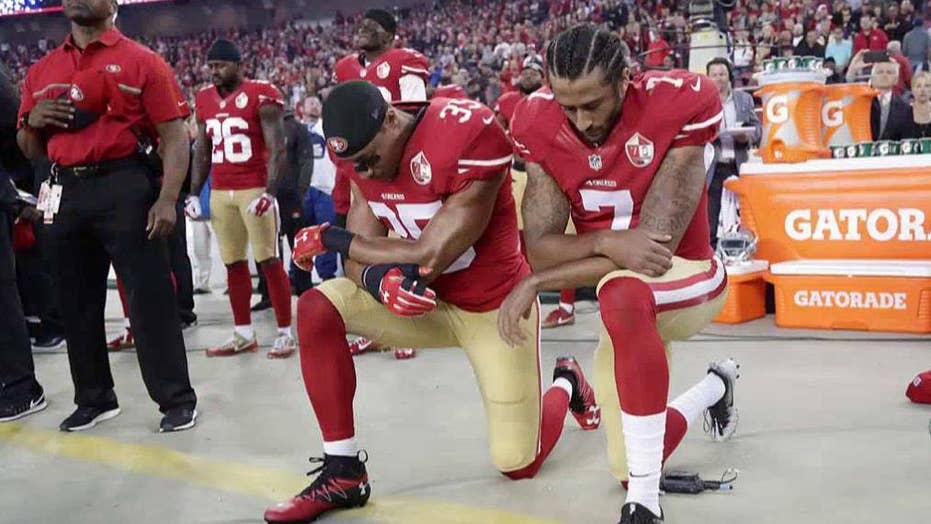 Patriotism and the national anthem controversy

Are some NFL players disrespecting America? 'The O'Reilly Factor' reacts

As some NFL players and high school athletes nationwide spark outrage by intentionally sitting or kneeling during the National Anthem, a Chicago veteran and retired alderman has proposed the city enforce that all people stand when the Star Spangled Banner is played.

“I may be retired as an alderman but I’m not retired as a Marine and as a Vietnam veteran and that means an awful lot to me, the flag does,” Jim Balcer told FoxNews.com.

Balcer, who was a Chicago alderman for 17 years, submitted a proposed ordinance to the Chicago City Council that would add a section to the municipal code explaining that all people should stand during the National Anthem.

Balcer’s proposal also suggests that members of the military in uniform should salute the American flag and that those out of uniform are welcome to as well. People who are not in the military should face the flag with their hands over their hearts and men should take off their hats, the proposal explains.

“My mother, who served in World War II, the American flag covered her casket. It covered my father-in-law’s casket, who served with Bob Dole in the 10th Mountain Division,” Balcer said.

The proposal has been sent to a committee. It does not specifically mention where the rules would apply. Balcer acknowledges it’s unlawful to force a person to stand but he thinks the move would signal that the city acknowledges the reverence that should be displayed during the National Anthem.

The alderman’s move comes in the midst of a nationwide movement lead by San Francisco 49ers backup quarterback Colin Kaepernick, who intentionally remained seated during the National Anthem before a preseason game against the Green Bay Packers in August.

“I am not going to stand up to show pride in a flag for a country that oppresses black people and people of color,” Kaepernick said in an interview with NFL Media. “To me, this is bigger than football and it would be selfish on my part to look the other way. There are bodies in the street and people getting paid leave and getting away with murder.”

President Obama has even acknowledged Kaepernick, saying the football player is exercising his First Amendment right by remaining seated during the National Anthem.

However, a slew of celebrities, NFL players and coaches have spoken out against Kaepernick, including the Chicago Bears' head coach, John Fox, who made it clear he expects his players to stand during the anthem.

“The flag is a symbol of our nation. Men and women have fought and died for this country. This is a great country. People do not fight to leave it, they fight to get into this country and I think what Mr. Kaepernick is doing is absolutely wrong,” Balcer said.

Many NFL fans aren’t happy either. Videos of people burning  Kaepernick’s jersey have garnered millions of views online and fans have threatened to boycott the NFL.

“I’m exercising my freedom of speech and I’m telling people, look, if you don’t like what Mr. Kaepernick is doing, don’t go to the games. Don’t watch them on television. Don’t buy the jerseys. Simple as that,” Balcer said.