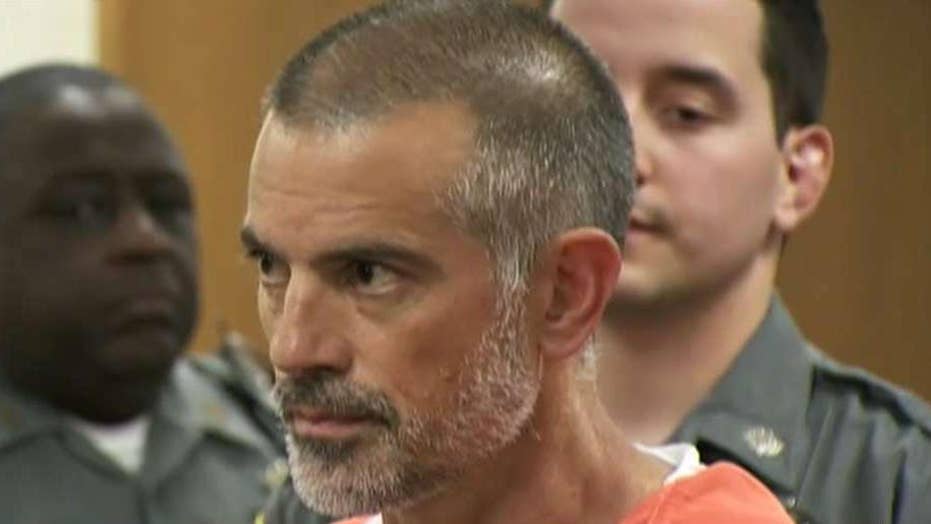 New clues in search for Connecticut mother; Trace Gallagher has the details.

NORWALK, Conn. -- A man police believe to be Fotis Dulos, the estranged husband of Jennifer Dulos, the Connecticut mother of five who has been missing for more than a week, was caught on multiple surveillance cameras the night she was reported missing throwing out numerous garbage bags and items "which appeared to be stained with a substance consistent with the appearance of blood," according to court documents revealed Monday.

Fotis Dulos is likely to face further charges in the coming days, prosecutors said during a Monday arraignment on evidence tampering allegations during which they asked that Dulos' bail be kept at $500,000. No plea was entered by Dulos or his girlfriend, who was also arraigned on tampering charges in a separate hearing Monday at Norwalk Superior Court.

Dulos, 51, and girlfriend Michelle Troconis, 44, were arrested late Saturday at a hotel in Avon, Conn., on charges of tampering and hindering prosecution relating to the disappearance of Jennifer Dulos. Dulos' lawyer said Monday it was unlikely he would be able to post bail immediately. 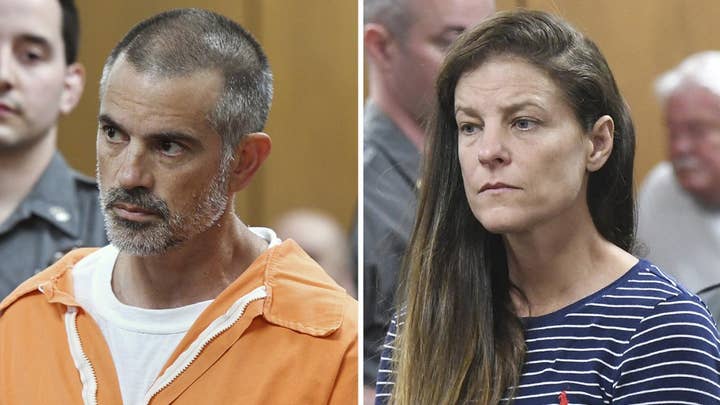 Troconis did make her $500,000 bail. She covered her head with a shirt as she left the courthouse, got into her lawyer's car and drove away. Wearing a GPS ankle monitor was a condition of her release, officials said.

Investigators said Fotis Dulos' girlfriend Michelle Troconis also was caught on video "leaning out of the passenger seat of the Ford pickup and either placing something on the ground or picking up an item."

Officials also described finding "a large quantity of physical evidence" in the Welles Lane neighborhood where Jennifer Dulos rented a home for the past two years. That evidence included "multiple stains on the garage floor which tested positive for human blood," "multiple areas of suspected blood spatter" as well as "evidence of attempts to clean the crime scene."

"Based upon the crime scene processing, investigators came to the consensus that a serious physical assault had occurred at the scene, and Jennifer Dulos was the suspected victim," the police affidavit stated. 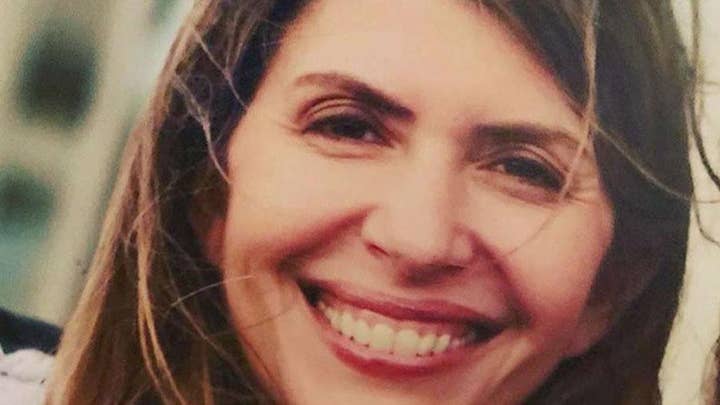 Police also reported obtaining video of a man they allege to be Fotis Dulos putting a FedEx package into a storm drain grate. Authorities say the package is believed to have contained two canceled 2017 license plates that had once belonged to Dulos' estranged wife.

Troconis, a multilingual high-roller who has interviewed celebrities on television and helped launch an upscale ski resort in Argentina, arrived at the courthouse first. Her brown hair was tied up in a ponytail and she did not speak to the media. Fotis Dulos arrived in court soon after wearing an orange jumpsuit.

Fotis Dulos and Troconis became romantically involved about a year before Jennifer Dulos filed for divorce and moved to the close-knit community in New Canaan.

Since Dulos was reported missing 10 days ago, local, state and federal authorities have been "working around the clock" to find her, New Canaan police said.

On Monday afternoon, about a dozen members of the FBI Evidence Recovery Team concentrated its search in a wooded area of Waveny Park, where they placed several evidence markets down in the woods and scanned the area with metal detectors.

Investigators spent much of the weekend searching Fotis Dulos' sprawling 10,000-square foot Farmington mansion, as well as a nearby residence Dulos' company, Fore Group, had developed. Armed with search warrants, investigators showed up at the Farmington home Sunday with more than a dozen state police vehicles and two canine units.

In the past 72 hours, state police obtained DNA samples from Fotis Dulos, who, for the past two years, has been locked in a contentious custody battle with his wife over the couple's five children, who range in age from 8 to 13.

Dulos' disappearance continues to be treated as both a missing-person case and a criminal investigation, New Canaan Police Lt. Jason Ferraro said.

The 50-year-old brunette was last seen driving a black Chevy Suburban 10 days ago when she dropped off her children at their private school in New Canaan. Authorities spent three hours Friday handing out flyers that featured a picture of Dulos and her vehicle.

The circumstances surrounding Dulos' disappearance have taken an ominous turn in recent days as more information has emerged about the couple's rocky relationship.

According to court documents, Jennifer Dulos said she was "terrified for (her) family's safety, especially since discovering the gun, since my husband has a history of controlling, volatile and delusional behavior." She also accused her husband, who was born and raised in Greece but attended college in the United States, of threatening to kidnap their children and take them to Greece.

Fotis Dulos, who married Jennifer 13 years ago, has strongly pushed back on his wife's allegations. He has said he turned in his handgun to the Farmington police and accused his wife of being the unfit parent. He also said she had mental health issues, asserting at one point she verbally attacked him and called him names in front of guests.

Members of the affluent Connecticut town have been gripped by the case.

"Stuff like this doesn't happen here," Leila Roxo, an associate at LoLo Bag, an accessories boutique in New Canaan, told Fox News. "It's a really quiet and safe town. Parents are OK just dropping off their kids and letting them walk around town, eat, have ice cream, buy something and then picking them up. It's pretty safe."

Roxo, who has a 6-year-old daughter, said she worries most about Dulos' children and the scars they may carry from their mother's disappearance.

"The 8-year-old is definitely going to remember some stuff," Roxo said. "I don't know how far apart the other ones are, but I have a 6-year-old and I feel like if this were to happen to her, she'd definitely remember."

On Sunday night, hundreds of people packed into St. Mark's Episcopal Church for the second vigil held in a week for Dulos.

Eric Cooper, the head of the New Canaan Country School, described Dulos as "an incredibly warm person" and a "devoted mother who supported everything her children did."

"We're heartbroken," he said. All five of the Dulos children attend the private school.

Carrie Luft, a spokeswoman for the family, said last week the children "miss their mother terribly, but they are doing as well under the circumstances as one could."

The kids reportedly are with their maternal grandmother, Gloria Farber, in New York City. Farber and her late husband sued Fotis Dulos, claiming in court documents he did not repay a $1.7 million loan he borrowed to buy and redevelop high-end homes.