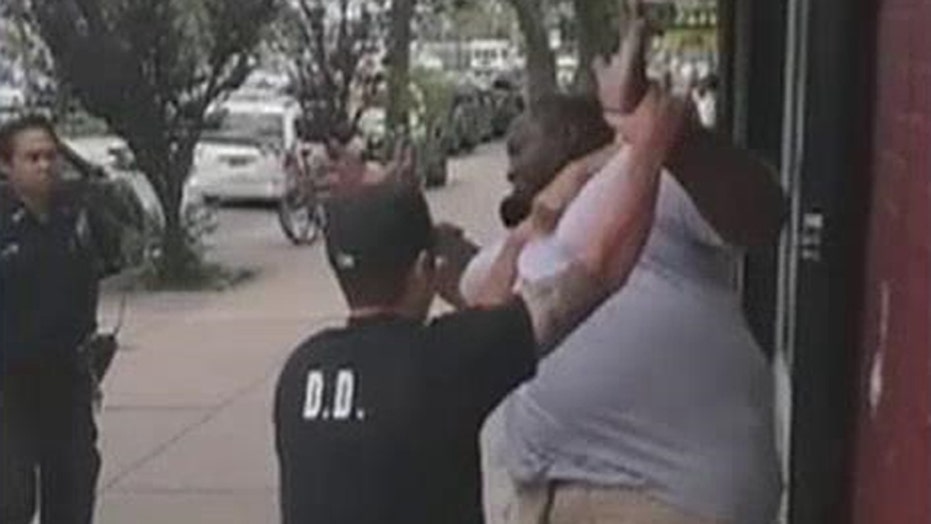 NYC grand jury does not indict officer in chokehold death

A look at the controversial case

The family of an unarmed black man who was killed by a white New York City police officer earlier this year called for peaceful protests Wednesday night after a Staten Island grand jury declined to indict the cop.

Gwen Carr, the mother of Eric Garner, who was killed on July 17 after police officer Daniel Pantaleo used a chokehold maneuver in a confrontation captured on video, said at an evening news conference she was "truly disappointed" in the grand jury's decision and glad that the Department of Justice planned to open a federal civil rights probe into the case.

"Rally in peace," she said at a news conference organized by the National Action Network, the advocacy group led by the Rev. Al Sharpton. "Do what you have to, but do it in peace."

Pantaleo, a 29-year-old, eight-year veteran of the force, faced charges ranging from murder to a lesser offense such as reckless endangerment in the death of Garner, who had a lengthy criminal record and was stopped on suspicion of selling loose cigarettes. Garner, 43 and a father of six, had health problems and died as a result of the chokehold, which is against NYPD policy.

Police union officials and Pantaleo's lawyer, however, argued that the officer used a takedown move taught by the police department, not a banned maneuver, because Garner was resisting arrest. They said his poor health was the main reason he died.

In the video, Garner can be heard yelling, "I can't breathe!"

In a statement Wednesday, Pantaleo issued condolences for Garner's family and said he hoped they would accept his apology for the incident.

"Hell, no," Garner's widow, Esaw Garner, said at the news conference when asked if she accepted. "The time for remorse was for when my husband was yelling to breathe. That would be the time."

Sharpton told reporters that a march in Washington was planned for later in December to bring attention to cases of fatal police force in the Garner case and other incidents around the country, including the police shooting of an unarmed black man in Ferguson, Mo., and the police shooting of a black 12-year-old boy in Cleveland.

Attorney General Eric Holder said Wednesday night that the Justice Department will review all the evidence from the city's investigation and will conduct its own civil rights probe into the death.

New York City Mayor Bill de Blasio said at an evening news conference in Staten Island that Holder and U.S. Attorney Loretta Lynch told him the investigation would be "done with a clear sense of independence" and that it would be "thorough."

He added that the New York Police Department will open its own investigation to decide possible administration action.

President Obama, speaking at the Tribal Nations Conference in Washington after the grand jury's decision, said many minority communities across the United States feel that law enforcement is not working with them "in a fair way."

By mid-afternoon, protests began to bubble up around the city. A Twitter hashtag, #ShutItDown, called on demonstrators to protest Wednesday night's annual Christmas tree lighting ceremony at Rockefeller Center in midtown Manhattan. The New York Post reported that angry protesters began to gather outside the shop where Garner died following the decision. Demonstrations were planned for Harlem and Brooklyn. A "lie-in" was held at the main concourse of Grand Central Station in Manhattan, though MyFoxNY.com reported that protesters were not blocking commuters and no arrests were being made.

By 5:30 p.m. in Times Square, about 300 protesters had peacefully congregated to criticize the grand jury's decision, as dozens of uniformed New York City police officers looked on. Protesters chanted: "I can't breathe!"; "No justice, no peace!"; "How do you spell racism? NYPD!"; "This is resistance!"

Ashley Coneys, 25, a self-described "person of color," lives several neighborhoods away from where Garner was killed in Staten Island. She said she was more shocked by Wednesday's development in the Garner case than a grand jury's decision not to indict a white Ferguson, Mo. police officer in the death of unarmed black teenager Michael Brown.

"If officers never have to account for killing people of color, where's the justice?" she told FoxNews.com. "Police are supposed to make us feel safe, but we don't have a relationship where we feel safe."

Another Times Square protester, Nadya Stevens, 31, said she was skeptical that a NYPD pilot program to have police officers wear body cameras would prevent deaths at the hands of cops.

"If there was a camera on Eric Garner as he was being killed, I don't know what body cameras are going to do," Stevens told FoxNews.com, adding that the issue goes beyond race and is a matter of police force.

"This isn't about black people. This is about humanity," she said.

The protest then moved toward Rockefeller Center. By 7 p.m., hundreds of protesters had lined both sides of 6th Avenue near Radio City Music Hall, one block away from the tree lighting, many of them shouting the refrain that marked the Ferguson protests: "Hands up! Don't shoot!"

The tree lighting ceremony was held without incident. De Blasio had canceled his appearance there earlier in the afternoon following the decision.

Later, protesters advanced to the West Side Highway, a main thoroughfare on the west side of Manhattan, where they stopped traffic around 50th Street.

Garner's family has filed a notice that it plans to sue the city for $75 million on the grounds of wrongful death, pre-death pain and suffering and civil rights violation, The New York Post reported. Sharpton, who is an adviser to the family, had called for a federal probe.

The grand jury, which consisted of 15 whites and 8 minorities, concluded there was not enough evidence to indict Pantaleo.

While details on the grand jurors were not disclosed, Staten Island is the most politically conservative of the city's five boroughs and home to many police and firefighters. The panel began hearing evidence in late September, including the video, autopsy results and testimony by Pantaleo.

In anticipation of the announcement on the grand jury decision, police officials met with community leaders on Staten Island to head off a repeat of the response in Ferguson, where demonstrations turned violent, resulting in more than 100 arrests and destruction of 12 commercial buildings by fire.

New York City's Police Commissioner William Bratton was asked Sunday if what happened in Ferguson could happen in New York. He said the NYPD has been preparing for months "in multiple ways," including community meetings, and added that he was more concerned with outside agitators.

Garner's death comes one day after Bratton and de Blasio touted the continued reduction of crime in New York City, which overall has fallen 4.4 percent from this time a year ago, with homicides falling 6.8 percent from the end of November 2013, according to police statistics.

But Tuesday's news conference also gave the mayor a chance to remind New Yorkers of the changes he's implemented to the NYPD at a time when the relationship between police and communities of color has fallen under an intense spotlight nationwide in the wake of Ferguson and Garner's death.

And the NYPD's use of stop and frisk, the policy that allows police to stop anyone deemed suspicious but which a federal judge ruled discriminated against blacks and Latinos, has fallen 79 percent in the first three-quarters of 2014.