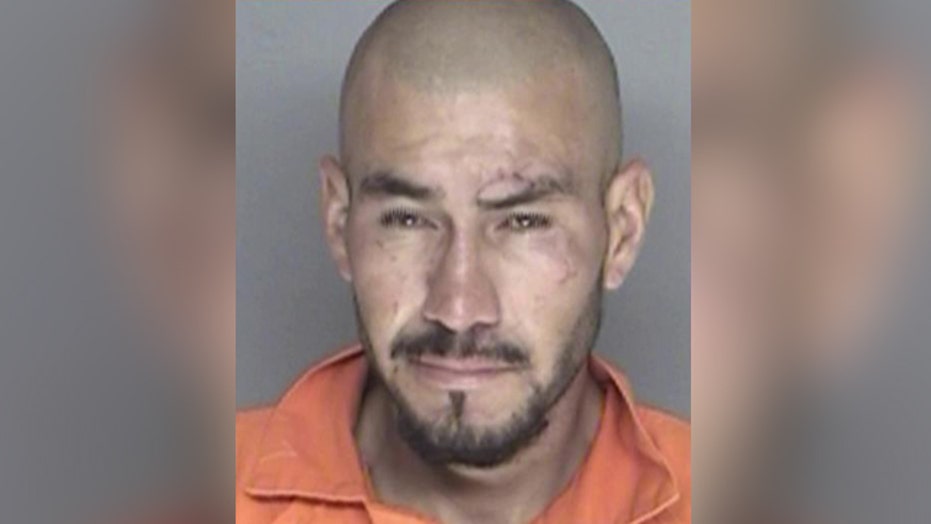 Illegal immigrant in custody for killing woman with hammer

The federal government can tell you how many "Native Hawaiian or Other Pacific Islanders" stole a car, the precise number of "American Indian or Alaska Natives" who were arrested for vagrancy or how many whites were busted for counterfeiting in any given year. But the government agencies that crunch crime numbers are utterly unable -- or unwilling -- to pinpoint for the public how many illegal immigrants are arrested within U.S. borders each year.

In the absence of comprehensive data, FoxNews.com examined a patchwork of local, state and federal statistics that revealed a wildly disproportionate number of murderers, rapists and drug dealers are crossing into the U.S. amid the wave of hard-working families seeking a better life. The explosive figures show illegal immigrants are three times as likely to be convicted of murder as members of the general population and account for far more crimes than their 3.5-percent share of the U.S. population would suggest. Critics say it is no accident that local, state and federal governments go to great lengths to keep the data under wraps.

"There are a lot of reasons states don’t make this information readily available, and there is no clearinghouse of data at high levels," said former Department of Justice attorney J. Christian Adams, who has conducted exhaustive research on the subject. "These numbers would expose how serious the problem is and make the government look bad.”

“They should have been sent back to their home country instead of being allowed to stay here and have the opportunity to kill Americans.”

Adams called illegal immigrant crime a "wave of staggering proportions." He and other experts noted that the issue has been dragged into the spotlight by a spate of cases in which illegal immigrants with criminal records killed people after being released from custody because of incoherent procedures and a lack of cooperation between local and federal law enforcement officials. The murders, including the July 1 killing of Kathryn Steinle, allegedly by an illegal immigrant in San Francisco, have left grieving loved ones angry and confused, local and federal officials pointing fingers at one another and the voting public demanding secure borders and swift deportation of non-citizen criminals.

“Every one [of the recent cases] was preventable through better border security and enforcing immigration laws,” said Jessica Vaughan, director of policy studies at the Center for Immigration Studies. “They should have been sent back to their home country instead of being allowed to stay here and have the opportunity to kill Americans.”

A spokesperson for U.S. Customs and Immigration Enforcement told FoxNews.com that comprehensive statistics on illegal immigrant crime are not available from the federal government, and suggested contacting county, state and federal jail and prison systems individually to compose a tally, a process that would encompass thousands of local departments.

FoxNews.com did review reports from immigration reform groups and various government agencies, including the U.S. Census Bureau, U.S. Sentencing Commission, Immigration and Customs Enforcement, the Government Accountability Office, the Bureau of Justice Statistics and several state and county correctional departments. Statistics show the estimated 11.7 million illegal immigrants in the U.S. account for 13.6 percent of all offenders sentenced for crimes committed in the U.S. Twelve percent of murder sentences, 20 percent of kidnapping sentences and 16 percent of drug trafficking sentences are meted out to illegal immigrants.

Critics say better border security is needed to keep illegal immigrants out, but those caught committing crimes here must be imprisoned and deported. (AP) (Reuters)

There are approximately 2.1 million legal or illegal immigrants with criminal convictions living free or behind bars in the U.S., according to ICE's Secure Communities office. Each year, about 900,000 legal and illegal immigrants are arrested, and 700,000 are released from jail, prison, or probation. ICE estimates that there are more than 1.2 million criminal aliens at large in the U.S.

In the most recent figures available, a Government Accountability Office report titled, "Criminal Alien Statistics," found there were 55,000 illegal immigrants in federal prison and 296,000 in state and local lockups in 2011. Experts agree those figures have almost certainly risen, although executive orders from the Obama administration may have changed the status of thousands who previously would have been counted as illegal immigrants.

David Inserra, a policy analyst for Homeland Security and Cybersecurity at The Heritage Foundation, said letting illegal immigrants convicted of crimes go free while they await deportation hearings is putting the public at risk.

Adams opened a rare window into the dearth of public data when he obtained an internal report compiled by the Texas Department of Public Safety and revealed its contents on his Pajamas Media blog. The report showed that between 2008 and 2014, noncitizens in Texas -- a group that includes illegal and legal immigrants -- committed 611,234 crimes, including nearly 3,000 homicides. Adams told FoxNews.com that other states have also closely tracked illegal immigrant crime, especially in the wake of 9/11, but said the statistical sorting “is done behind closed doors.” States closely guard the statistics out of either fear of reprisals from the federal government or out of their leaders' own insistence on downplaying the burden of illegal immigrant crime, he said.

"There are a lot of reasons states don’t make this information readily available and there is no clearinghouse of data at high levels," Adams said. "These numbers would expose how serious the problem is and make the government look bad."

A smattering of statistics can be teased out of data made public in other states heavily impacted by illegal immigration, although a full picture or apples-to-apples comparison remains elusive.

■ In Florida, there were 5,061 illegal immigrant inmates in state prison facilities as of June 30, but neither the state Department of Corrections nor the Florida Department of Law Enforcement track the number in county prisons, spokesmen for those agencies told FoxNews.com.

■ In Illinois, where state prisons house 46,993 inmates, some 3,755 are illegal immigrants, according to Illinois Department of Corrections figures. Once again, state officials do not compile figures for county jails, although a Cook County official estimated that nearly 6 percent were illegal immigrants.

■ In Arizona, neither state public safety officials nor the governor’s office could produce figures showing the number of criminal illegal immigrants held in county jails, but state prison figures released by the Arizona Department of Corrections show out of 42,758 prisoners held in state facilities in July, about 10.8 percent were illegal immigrants.

■ In California, there were 128,543 inmates in custody as of Aug. 12, but the state, which has been criticized for its leniency toward illegal immigrants, no longer keeps track of the citizenship status of inmates. As of July 31, 2013, the last time figures were documented, there were as many as 18,000 “foreign-born” citizens in California state prisons of 133,000 incarcerated. The Board of State and Community Corrections provided figures to Fox News from 2014, showing there were 142,000 inmates in 120 county prisons, but while everything from mental health cases to dental and medical appointments are closely tracked, the number of illegal aliens -- or even non citizens -- is not.

“Frankly, this is something every state should track, but they don’t. Not even ICE publishes this much information on offenders and immigration status,” Vaughan said.

“Immigrants, regardless of their legal status, make valuable contributions to our economy as workers, business owners, taxpayers and consumers,” said Erin Oshiro, of Asian Americans Advancing Justice. “We need an immigration system that that keeps families together, protects workers, and prioritizes due process and human rights."