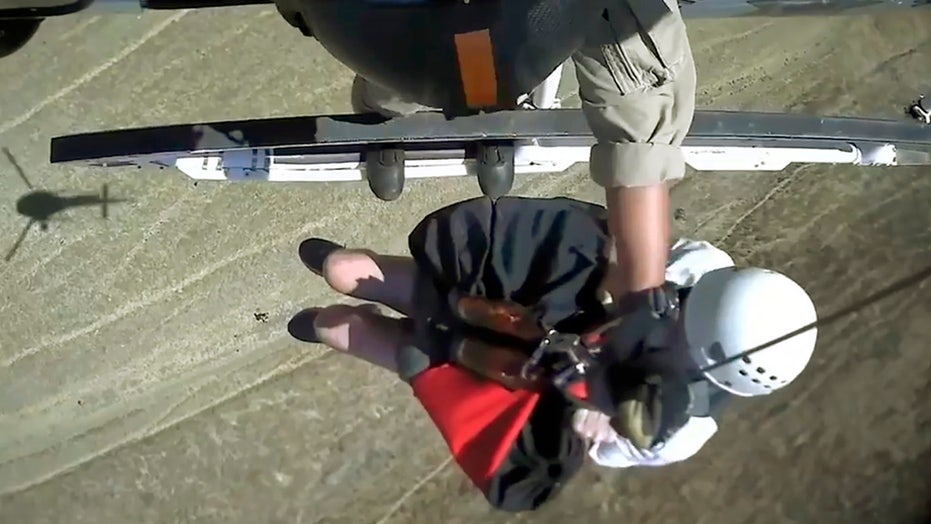 A tense confrontation between a pair of elderly California hikers and a cow and her calf resulted in the intervention of a California Highway Patrol (CHP) helicopter on Sunday.

The couple was injured after falling to the ground as the bovine mother gave chase in Lynch Canyon Regional Park, just north of Vallejo.

A video of the CHP Golden Gate Division rescue was captured and later posted to Facebook.

"A CHP Flight Officer/Paramedic made contact with the couple and determined that they were injured and a hoist rescue would be needed," the caption read. "CHP H-32 hoisted the couple, one by one, approximately 75 feet to H-32 and were flown to waiting crews at the trailhead."

The officials were able to successfully lift the couple into the air by blasting the chopper's siren -- deterring any additional aggression from the cow who is seen standing with her calf just feet away on the desolate trail.

Firefighters and Medic Ambulance of Solano County reportedly also aided in the rescue.

The hikers were then transported to a hospital to treat their injuries.

According to The East Bay Times, the same helicopter came to the aid of three others in North Bay Parks on Sunday.

CHP confirmed that a woman who fell while hiking at Putah Creek State Wildlife Area was hoisted to the aircraft and then taken to Kaiser Permanente's Vacaville hospital where she was found to be in critical condition.

In addition, two 18-year-old women were injured when they jumped from a rock into Lake Berryessa. One was found unconscious after hitting the water and flown to Santa Rosa Memorial Hospital.

At the end of July, a couple in northern England was attacked by a cow during a walk in the Yorkshire Dales and Austria launched their own information campaign to remind their residents of the danger of provoking cows following several violent encounters.

Animals kill just over 400 people in the U.S. on average each year. Of those 400 deaths, cows kill about 20 people annually.