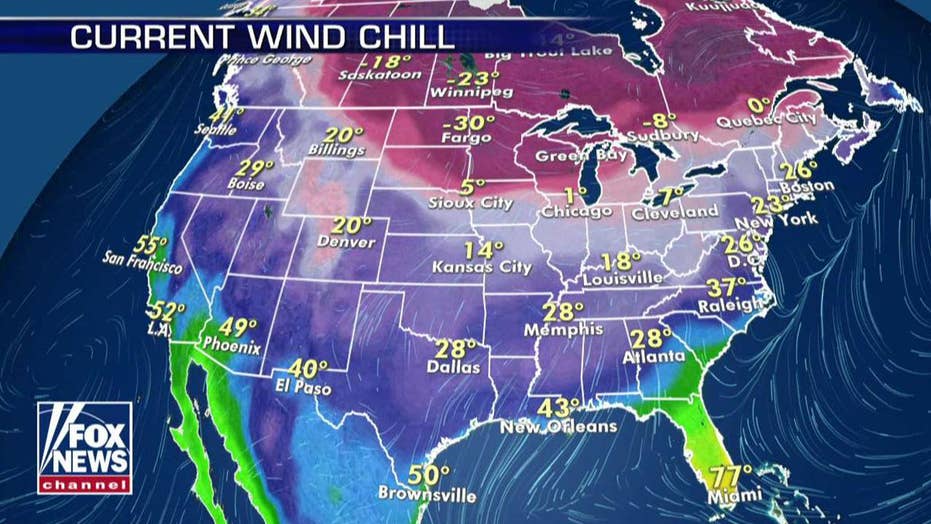 A day after parts of the East Coast warmed up to the low 60s, a drastic swing in temperature Wednesday left much of the region facing rain, snow and bitterly cold wind chills.

Overnight rain turned to snow as temperatures dipped below freezing in parts of New York, northern New Jersey, southern Connecticut and New England. The National Weather Service issued a winter weather advisory until the afternoon as the system moves east and the snow subsides.

Snow totals of 1 to 4 inches were expected in parts of the tri-state area, the agency said. Snow reports showed an accumulation of 3.7 inches in Danbury, Conn., by the early afternoon, while New York City's Central Park saw less than an inch.

Boston and its surrounding areas were also forecast to see 1 to 4 inches of snow as temperatures dropped below freezing just 24 hours after 63-degree weather. A Pembroke, Mass., resident said that 3.5 inches have so far blanketed his neighborhood.

The NWS urged those traveling on the roads Wednesday morning and afternoon to use caution.

The light snow accumulation comes ahead of freezing wind chill temperatures the NWS forecast for Thursday morning. The winds could make New York feel like 18 degrees, while Boston could feel as cold as 11 degrees.

Meanwhile, the upper Midwest was also forecast to experience snow freezing temperatures Wednesday. Wind chills as low as 40 degrees below zero could affect parts of western Minnesota and eastern North Dakota until the afternoon, the NWS said.

“The dangerously cold wind chills could cause frostbite on exposed skin in as little as 10 minutes,” the agency said.

The coldest wind chill temperatures of 42 below zero were recorded in Fosston, Minn., and McHenry, N.D., early Wednesday.

“Even by our standards, this is very cold for December,” the agency said.