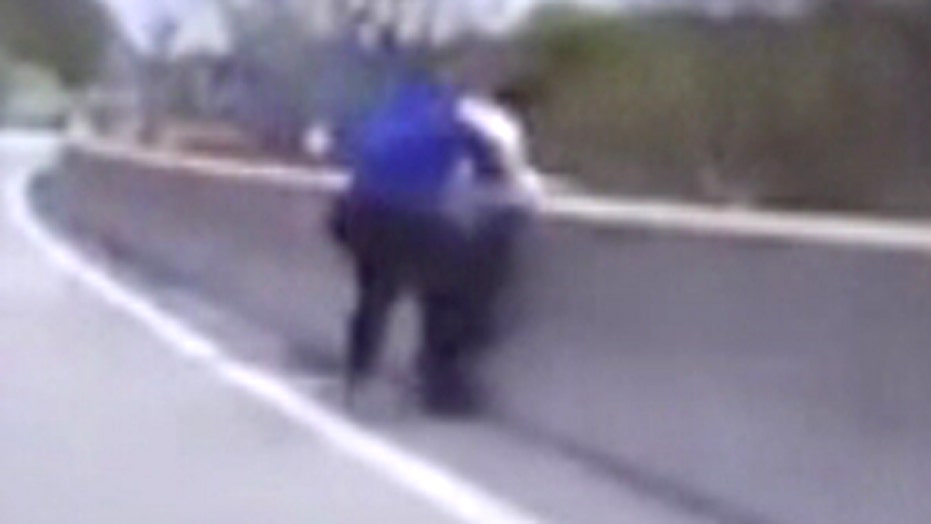 Hero cop chases down man, stops him from jumping off bridge

Dramatic video released Tuesday shows the moment a New Jersey police officer saved the life of a man who tried to jump off the Route 287 bridge on Monday, NJ.com reported.

The dash cam video shows Riverdale Police Sgt. Greg Bogert arriving at the bridge to find a man standing outside his car parked in on the road.

Bogert, who was in the vicinity responding to another call, was informed by dispatchers that the man was attempting to run in front of traffic and looking out over the edge.

"You drive up and you really don't know what to expect," he told FoxNews.com.

Bogert arrived at the scene and tried to make small talk. He crakced open his door and the man sprinted to the side of the bridge. Bogert pursues the man on foot. The man gets to the concrete barrier and attempts to climb over.

Bogert runs to the man, yelling, "Don't do it! Don't do it!" He reaches the man and tackles him.

"The first thing I did was look up and see if there was any danger with traffic," he said. "Then I asked him: What happened? Talk to me."

The man, who is reportedly believed to be from Pennsylvania, did not talk extenisvely with Bogert, but mentioned something about a family member dying, Bogert said.

The man eventually calmed down and was transported to an area hospital.

"It was an adrenaline crash," Bogert said. "I didn't get much sleep last night."