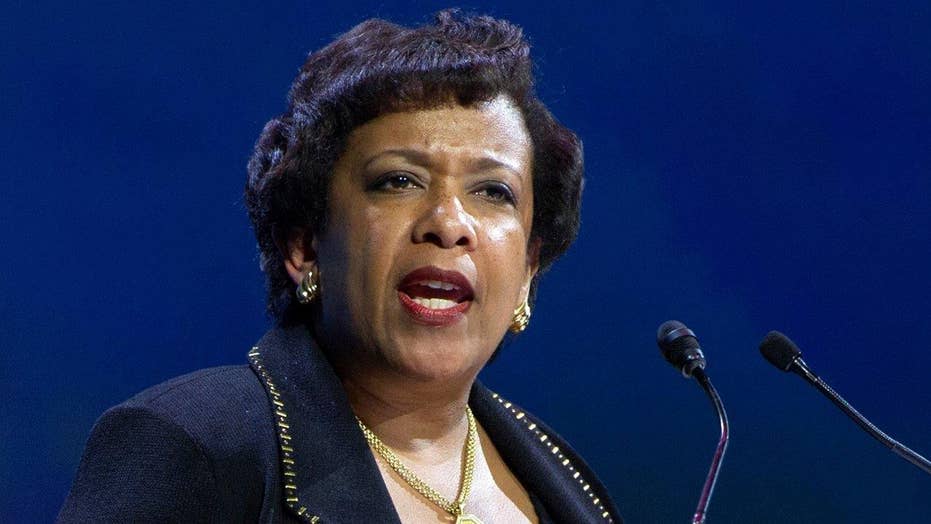 The Department of Justice is scrubbing references of radical Islamic beliefs from the transcripts of calls Orlando terrorist Omar Mateen made to police during his massacre, Attorney General Loretta Lynch said Sunday.

A partial transcript of the conversations between authorities and Mateen, who killed 49 and wounded 53 in the June 12 attack at a Florida gay nightclub, is set to be released on Monday. But Lynch, who appeared on numerous Sunday talk shows, said the transcripts will not include Mateen's oath of loyalty to ISIS or any other religious justification for the attack.

The calls could confirm Mateen's motives in the wake of Facebook postings from the killer that already reveal Islamist leanings.

“I pledge my alliance to (ISIS leader) abu bakr al Baghdadi..may Allah accept me,” Mateen wrote in one post during the attack. “The real muslims will never accept the filthy ways of the west” …“You kill innocent women and children by doing us airstrikes..now taste the Islamic state vengeance.”

Other posts include warnings to the U.S. and Russia to stop bombing the Islamic State and a prediction that more ISIS attacks would follow Mateen's assault.

But that "radical Islam" angle is likely to be missing from Monday's release.

Critics blasted the move by the administration, which has rejected branding terrorist acts as motivated by radical Islam and has sought to paint the Orlando attack as a gun control issue.

"This is not just a simple wording issue," Ric Grenell, a Fox News contributor and former aide to UN Ambassador John Bolton told Fox and Friends Monday morning. "The fact that Loretta Lynch is somehow redacting the specific enemy that is being called out here is a PR move."

Former New York City Mayor Rudy Giluiani, also on Fox and Friends Monday, said it does not help law enforcement to try to bury the motivations or allegiences of criminals and terrorists.

"Why didn't they do this with the Mafia, to spare Italian-Americans?" Giuliani asked. "Why? Because if you did, you would never make the connection [which ultimately] brought them down."

Mateen died in a hail of gunfire after police blew a hole in the side of the venue following a three-hour hostage standoff. But before his final moments came, Mateen declared allegiance to Islamic State leader Abu Bakr al-Baghdadi -- right in the midst of the slaughter.

The move to edit the transcripts of Mateen's calls harkens back to April, when French President Francois Hollande's reference to "Islamist terrorism" was left out of an official White House video during an international summit in Washington D.C. The White House later told several news outlets the dropped phrase was a "technical issue."

President Obama famously has tried not to use the phrase "radical Islamic terrorism" in his remarks, a position many Republicans have lambasted him for. Obama has said he believes that phrase gives a measure of legitimacy to terror groups.

And as investigators look past Mateen's religious convictions, Lynch said a top goal is to build a complete profile of the gunman in order to help prevent another massacre like Orlando.

“We are trying to re-create the days, the weeks, the months of this killer’s life before this attack,” Lynch said. “And we are also asking those people who had contact with him to come forward and give us that information as well.”

Mateen was the focus of two FBI investigations into suspected terrorism. However, the probes were concluded without further action, and Mateen was allowed to legally buy firearms.

Lynch said the Justice Department is “going to go back and see what changes could have been made,” regarding how the investigations were handled.

While speaking to CBS’ “Face The Nation,” Lynch said that a key goal of the probe was to determine why Mateen targeted the gay community. The victims were predominantly gay and Hispanic since it was "Latin Night" at Pulse.

Lynch, speaking to “Fox News Sunday,” declined to say whether federal authorities will charge anybody in connection with the mass murder. She also declined to comment on why the wife of the shooter has not been arrested, amid purported evidence that she either helped her husband plot the murders or suspected his intentions and did not alert authorities.

Lynch also expressed support for Texas GOP Sen. John Cornyn's amendment, which is scheduled for a vote Monday in the Senate and would allow the federal government to delay a gun sale to a suspected terrorist for as long as 72 hours. Afterward, prosecutors would have to persuade a judge to block the sale permanently.

Lynch said such an amendment would give the federal government the ability to stop a sale to somebody on the terror watch list.

Meanwhile, thousands of people packed Lake Eola Park in Florida Sunday evening for a vigil to honor the victims of the shooting. The park was filled with people holding white flowers, American flags and candles.

At the end of the gathering, people held up their candles as the name of each victim was read, creating a ring of fire around Lake Eola. They chanted "One Orlando," ''Orlando United" and "Somos Orlando," Spanish for "We are Orlando."

"That event has gotten the attention of the world," said Evania Nichols, an Orlando resident. "And, for Orlando — a city that's always been incredibly inclusive no matter your skin color, no matter your background — it's brought about a movement that I think is starting here and I really hope continues."