More than 500 pages of internal documents from DC Metropolitan Police concerning the fatal shooting of Ashli Babbitt in the Capitol on Jan. 6 reveal witness accounts stating she was not holding a weapon at the time of her death and how "upset" the officer was after shooting her.

"These previously secret records show there was no good reason to shoot and kill Ashli Babbitt," stated Tom Fitton, president of Judicial Watch, which obtained the documents through a May 2021 FOIA lawsuit. "The Biden-Garland Justice Department and the Pelosi Congress have much to answer for the over the mishandling and cover-up of this scandalous killing of an American citizen by the U.S. Capitol Police."

Babbitt, an Air Force veteran, was shot and killed during the storming of the Capitol by a bullet fired by Capitol Police officer ​​Lt. Michael Byrd. The documents from the DC Metropolitan Police department show that witnesses did not see Babbitt holding a weapon prior to her being shot, and reveal conflicting accounts of whether Byrd verbally warned Babbitt before shooting her.

A Capitol Police sergeant, whose name is redacted, described seeing Babbitt climbing through a broken window, but did not witness her holding a weapon, according to a portion of the documents received by Judicial Watch.

"Sergeant [redacted] observed a white, female protester was climbing through an opened area where the glass pane had been knocked out. He heard a gunshot and this female fell backwards through the opening. The crowd on the other side of the barricaded east doors, began to step back and some put their hands in the air. Sergeant [redacted] observed Lieutenant Byrd step back just after hearing the gunshot. He did not see anything in the female protester’s hands prior to the gunshot," the Internal Affairs Division report stated.

"Sergeant [redacted] never went on the other side of the barricaded east door. He also did not know that it was Lieutenant Byrd who shot his gun until he talked to him moments after it occurred. Lieutenant Byrd looked upset and stated, ‘I was the one who took the shot,’" the report continued. 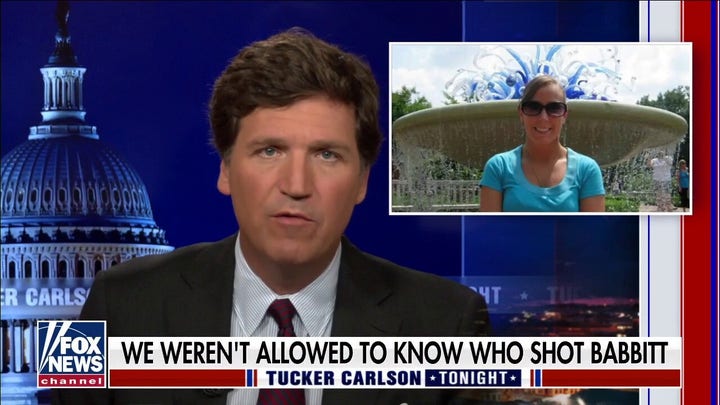 Judicial Watch noted that in a written transcript of the interview with the sergeant, he detailed he was not sure "if something happened to" Byrd that "caused him to take the shot or not."

"Uh, I saw Lieutenant Byrd kinda. I don’t know if it was before or after. Cause I was trying to figure this out of, but there was at one point where I remember seeing him and he kind of went like this and then came back up again. Uh, I don’t know if that was from him taking the shot and then stepping back from that shot or if it was before that, I can’t, no matter how I tried to rack my brain, I can’t, I can’t figure out when that happened, but uh, so I don’t know if something happened to him where [sic] caused him to take the shot or not," the written transcript states.

The sergeant went onto describe that Byrd was "visibly upset" after shooting Babbitt.

"No, his eyes were red. He was, you could see he was visibly upset and he just, you know, kind of comfort him and told him, you know, we gotta get outta here," the transcript of the interview states.

The interviewer asked the sergeant if he approached Babbitt after the shot, and he responded, "No, no, no. I maintained my position."

He added that Byrd directed him and other officers to go down "into the subway" following the shooting.

The interviewer also asked: "This was not a typical day, was it?"

"Definitely not my craziest day there," the sergeant replied, saying the closest event to compare it to was "the shots fired back in 2004, 2005 in the Rayburn building ...."

The interview asked the sergeant if Jan. 6 was  a "frightening experience," to which the sergeant responded: "Oh yeah. I’m not afraid to say I was, I was scared s--t."

The Internal Affairs Division also conducted a different interview with another Capitol Police officer on Jan. 6, who was positioned directly behind Byrd in the Speaker’s Lobby during the shooting of Babbitt.

"He did not see Ms. McEntee [Babbitt] in possession of any potential weapons," the summary report states.

"He reiterated that he did not observe that she was armed."

That interviewee also described Byrd as "upset" following the shooting.

FILE - In this Jan. 6, 2021, file photo insurrections loyal to President Donald Trump rally at the U.S. Capitol in Washington. U.S. Capitol Police officers who were attacked and beaten during the Capitol riot filed a lawsuit Thursday, Aug. 26, against former President Donald Trump, his allies and members of far-right extremist groups, accusing them of intentionally sending insurrectionists to disrupt the congressional certification of the election in January.  ((AP Photo/Jose Luis Magana, File))

That interviewee also said that a man with a beard wearing a suit attended to Babbitt, according to transcripts of the interview. Neither he nor the sergeant interviewed were able to prove the identity of the bearded man in the suit, but said they believe he was with the House Sergeant-at-Arms office.

Yet another report also stated that a sergeant did not see a weapon in Babbitt’s hands before hearing a gunshot. That report added that investigators "recovered 'a para force’ folding knife in Ms. Babbitt’s pants pocket."

"The crowd on the outside of the previously barricaded east doors began to step back, and some raised their hands in the air. Sergeant [redacted] did not see anything in Ms. Babbitt’s hands prior to hearing the gunshot."

Another report on an interview with a Capitol Police officer on Feb. 4 stated, "He did not hear any verbal commands" before Babbitt was shot.

A separate Jan. 6 phone interview with a man who "reached out" to the Metro PD, who claimed to have been in the House Chambers at the time of the shooting, contradicted the officer’s Feb. 4 interview.

He said he did in fact hear Byrd shout "loud verbal commands" that he would "shoot" before firing at Babbitt. That interviewee also claimed Byrd fired twice, not once.

"He [Byrd], uh, did everything he could do…. He was by himself, we were defending the front door and they were shaking it."

The documents come after Byrd gave his first public interview in August, recounting the events leading up to the shooting, and said firing his weapon was a "last resort option."

"I tried to wait as long as I could," Byrd said. "I hoped and prayed no one tried to enter through those doors. But their failure to comply required me to take the appropriate action to save the lives of members of Congress and myself and my fellow officers."

The U.S. Capitol Police concluded its internal investigation seven months after the shooting and declared it was "lawful and within Department policy." The policy states that the officer can use deadly force if he "reasonably believes that the action is in defense of human life."

"If the doors were breached, the rioters would have immediate access to the House Chambers," the U.S. Capitol Police said on August 23. "The actions of the officer in this case potentially saved Members and staff from serious injury and possible death from a large crowd of rioters who forced their way into the U.S. Capitol and to the House Chamber where Members and staff were steps away."

"I know that day I saved countless lives," Byrd said in his interview. "I know members of Congress, as well as my fellow officers and staff, were in jeopardy and in serious danger. And that’s my job."