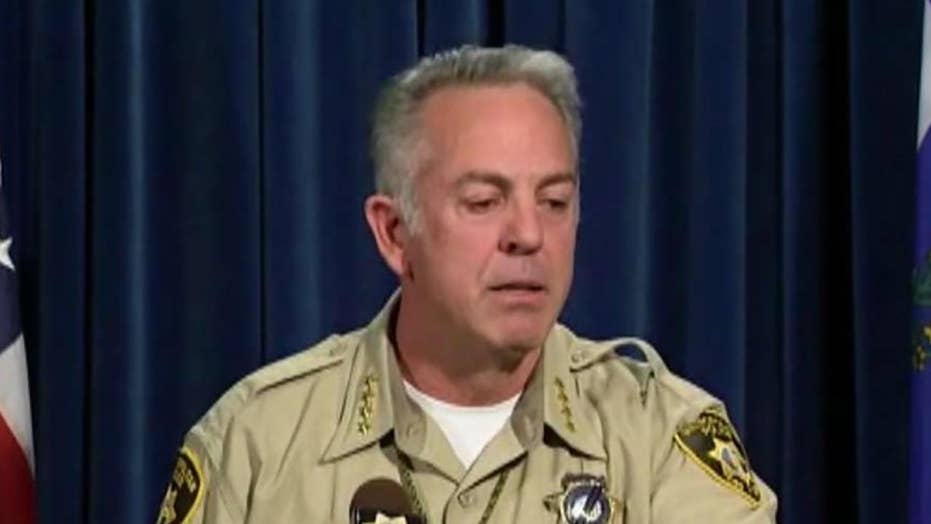 Sheriff Lombardo defended his investigators, while changing the timeline again; Jonathan Hunt has the story for 'Special Report.'

Could a study of the Las Vegas massacre gunman's brain help to reveal what led him to kill 58 people?

Scientists are preparing to do a microscopic study of Stephen Paddock's brain, but whatever they find, if anything, likely won't be what led him to perpetrate the worst mass shooting in modern U.S. history, experts said.

Paddock's brain is being sent to Stanford University for a months-long examination after a visual inspection during an autopsy found no abnormalities, Las Vegas authorities said.

Doctors will perform multiple forensic analyses, including an exam of the 64-year-old's brain tissue to find any possible neurological problems.

FILE - This undated photo provided by Eric Paddock shows his brother, Las Vegas gunman Stephen Paddock. On Sunday, Oct. 1, 2017, Stephen Paddock opened fire on the Route 91 Harvest festival killing dozens and wounding hundreds. Paddock left behind little clues about what led him to carry out the deadliest mass shooting in modern U.S. history. He killed 58 and wounded nearly 500 before killing himself. Paddock's brain is being sent to Stanford University for a months-long examination after a visual inspection during an autopsy found "no abnormalities," Las Vegas authorities said. Doctors will perform multiple forensic analyses, including an exam of the 64-year-old's brain tissue to find any neurological problems. (Courtesy of Eric Paddock via AP, File)

The brain will arrive in California soon, and Stanford has been instructed to spare no expense for the work, The New York Times reported. It will be further dissected to determine if Paddock suffered from health problems such as strokes, blood vessel diseases, tumors, some types of epilepsy, multiple sclerosis, degenerative disorders, physical trauma and infections.

Dr. Hannes Vogel, Stanford University Medical Center's director of neuropathology, would not discuss the procedure with The Associated Press and referred questions to officials in Clark County, where Las Vegas is located. They also refused to provide details.

Vogel told The Times that he will leave nothing overlooked to put to rest much of the speculation on Paddock's health as investigators struggle to identify a motive for the shooting.

The examination will come about a month after Paddock unleashed more than a thousand bullets through the windows of a  32nd floor suite at the Mandalay Bay casino-hotel into a crowd below attending an outdoor country music festival. After killing 58 people and wounding hundreds more, Paddock took his own life with a shot through his mouth, police say.

Tucker posed questions about why Jesus Campos, the only eyewitness to the mass shooting in Las Vegas, went to Mexico a week after the massacre and whether he is a licensed security guard. A union rep responds. #Tucker

Investigators working around the clock remain frustrated by a lack of clues that would point to his motive. Authorities have resorted to putting up billboards in southern Nevada seeking tips and now the intensive brain study that medical experts say likely won't yield definitive answers.

If a disease is found, experts say it would be false science to conclude it caused or perhaps even contributed to the massacre, even if that explanation would ease the minds of investigators and the world at large.

"There's a difference between association and causality, and just because you have anything, doesn't mean it does anything," said Brian Peterson, president of the National Association of Medical Examiners and chief coroner of Wisconsin's Milwaukee County.

The microscopic study is not a standard practice but is regularly used as needed. Families sometimes request such a detailed examination to better understand their own genetic risks.

Peterson said it's also common in high-profile cases such as Paddock's, where so much is riding on the results that all forensic options must be exhausted.

Douglas Fields, a neuroscientist who studies the rage circuit in brain systems, said horribly violent events, such as mass shootings and terrorism, rarely involve actual brain abnormalities but can be triggered by psychiatric problems.

Perpetrators often are suicidal psychopaths who are motivated to commit heinous crimes because they have internalized their isolation and anti-social behavior as an existential threat for themselves, he said.

Source provides document that shows Jesus Campos, the only eyewitness to the worst mass shooting in U.S. history, entering the United States from Mexico at the San Ysidro border crossing in San Diego county almost exactly one week after the Las Vegas massacre. Why did Campos go to Mexico? Many questions remain unanswered in massacre. #Tucker

"When police look for motive, it's kind of misplaced in cases like this because they appear to be crimes of rage. There's no motive for crimes of rage. It's a crime of passion," Fields said.

One such case involved the University of Texas shooter Charles Whitman, who fatally shot 13 people in 1966 from a clock tower on the Austin campus. Whitman was found to have a pecan-sized tumor in his brain, though the suggestion that it caused his rampage is still debated decades later.

Peterson, who is not involved in the Paddock case, said an initial inspection that is standard for any autopsy would generally include dissecting the brain at one-centimeter intervals to look for issues identifiable to the trained eye — infection, tumor, symmetry, bleeding and blood vessel abnormality.

A further study would involve a microscopic focus on the tissue cells, such as using stains to determine different types of dementia and other degenerative diseases, including chronic traumatic encephalopathy, which is sometimes found in people who have suffered repetitive brain trauma.

There also would likely be a review of the brain at a molecular level though DNA, Peterson said.

Experts say the brain study on Paddock will be a worthy effort for scientific reasons.

Dr. Paul S. Appelbaum, a psychiatry expert at Columbia University, said that at minimum, it might yield something even tangential that can be passed on to the public, such as awareness for psychological disorders or brain diseases.

"Are we ever going to know for certain what caused his brain to do that?" Appelbaum asked. "Probably not from a neuropathological examination, but it's not unreasonable to ask and see whether it might contribute to our understanding of what occurred."