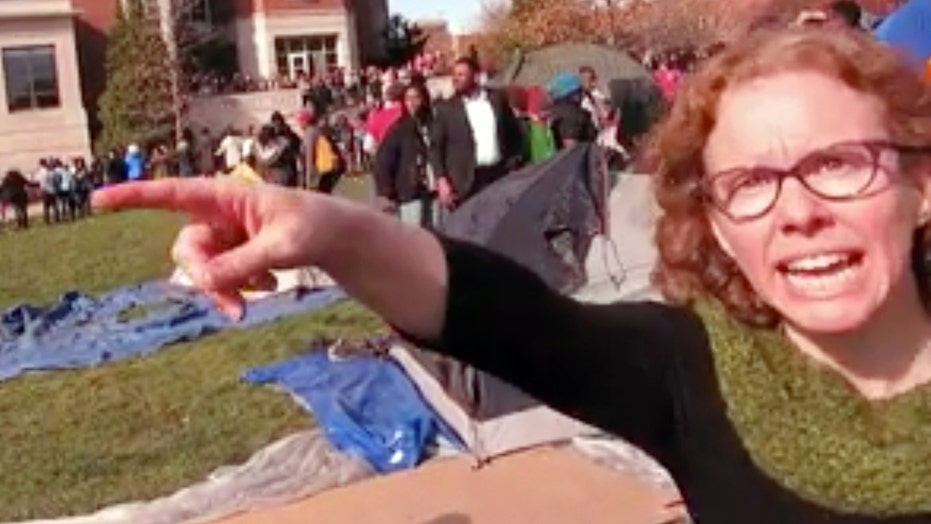 A since-suspended University of Missouri professor is seen yelling profanities at police officers trying to clear activists blocking traffic in a video that surfaced late Sunday night of an October protest.

Assistant Professor of Communication Melissa Click was suspended from her position in late January after she was charged with misdemeanor assault following a different videotaped skirmish with a student journalist in November. The prosecutor has said he’ll drop the charge in a year if Click completes community service, though her position at Missouri is still being reviewed.

The new video of Click tangling with police officers during an Oct. 10 Homecoming Parade could complicate the matter. The Missourian obtained the police body camera footage through an open records request.

“Her conduct and behavior are appalling, and I am not only disappointed, I am angry that a member of our faculty acted this way,” Interim Chancellor Hank Foley said in a statement emailed to The Missourian. “Her actions caught on camera last October are just another example of a pattern of misconduct by Dr. Click – most notably her assault on one of our students while seeking ‘muscle’ during a highly volatile situation on Carnahan Quadrangle in November.”

In the new video, Click can be seen in the same group as several student protesters who were blocking the Homecoming Parade route. As officers attempt to direct the group back onto the sidewalk, Click forces herself between a police officer and graduate student Jonathan Butler, who is also a prominent campus activist. Click tells the officers to “get your hands off the children” and then uses a profanity against an officer who grabs her shoulder as he tries to direct her back onto the sidewalk.

“We must have high expectations of members of our community, and I will address these new revelations with the Board of Curators as they work to complete their own review of the matter,” Foley said in the statement.

Click first gained notoriety after a video surfaced of her during a Nov. 9 demonstration by student activists who took issue with perceived racial bias at the university. A YouTube video shows Click confronting videographer Mark Schierbecker, apparently trying to block him from shooting video on the public quad. When Schierbecker asks to speak to Click, she tells him to leave.

When Schierbecker refuses to leave, Click yells to a nearby group: “Who wants to help me get this reporter out of here? I need some muscle over here.”

In an interview with The Missourian on Friday – before the new video became public – Click admitted the November incident was a “mistake” but hoped to still keep her job.

Warning: The following video contains language which some may find offensive.