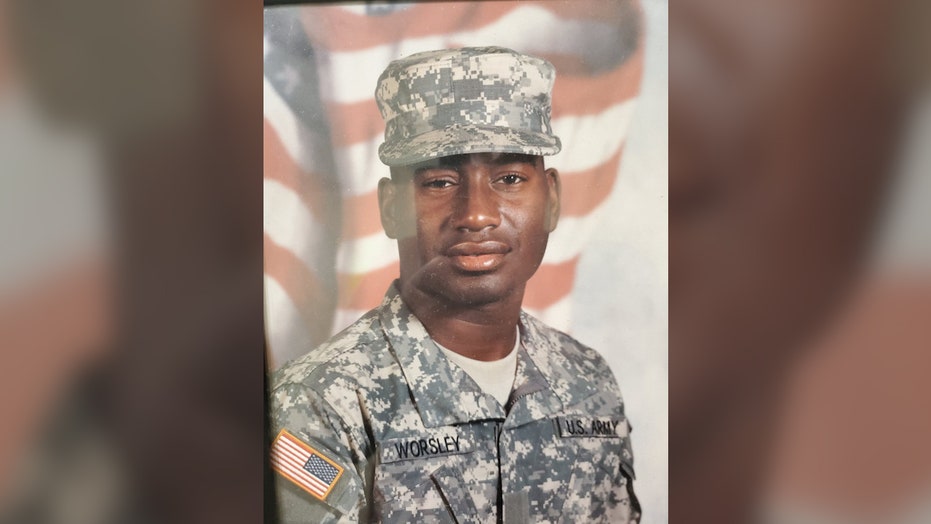 By all accounts, Sean Worsley is a war hero. He earned a Purple Heart, along with a laundry list of additional military accolades, for clearing roadside bombs in Iraq.

He also earned a lifetime of post-service ailments, including post-traumatic stress disorder (PTSD) and a traumatic brain injury (TBI). As a result of his injuries, Worsley was given a 100 percent disability rating from the Department of Veteran’s Affairs. He treated the worst symptoms of both injuries with medical marijuana prescribed to him legally in Arizona.

Now, Worsley sits in an Alabama jail facing five years in the state’s notoriously violent prison system after admitting to an officer he was in possession of medical marijuana while driving through Alabama and a subsequent probation violation for missing a court date.

Sean Worlsey in military fatigues. The veteran was arrested for possessing medical marijuana in Alabama. (Photo courtesy of Eboni Worsley.)

Worsley's ordeal began in 2016 when he and his wife, Eboni, were arrested late one night after stopping for gas. They were traveling through the state on their way to North Carolina, where they were planning on helping Sean’s grandmother repair extensive damage to her home after Hurricane Matthew flooded her community.

“We’re being very cooperative, so not thinking that there’s going to be a major issue. … I show him I don’t want trouble, don’t mean any harm.”

“We [were] not being competitive, we were being completely compliant,” Eboni Worsley told Fox News. “We’re being very cooperative, so not thinking that there’s going to be a major issue. … I show him I don’t want trouble, don’t mean any harm.”

Alabama’s marijuana laws are highly criminalized, and medical marijuana exceptions are nonexistent. From 2012 to 2016, an analysis by the Southern Poverty Law Center and Alabama Appleseed found that 89 percent of people arrested for pot were arrested for simple possession.

The same analysis found that in 2016, the year the Worsleys were arrested, Alabama law enforcement made 2,351 arrests for marijuana possession, over 1,000 more than they made for robbery. That year, Black people in Alabama were four times more likely than their White counterparts to be arrested for marijuana, according to the SPLC.

Currently, possession for personal use in Alabama is punishable by up to a year in prison and a $6,000 fine, according to a law analysis by NORML, a marijuana advocacy organization.

Fox News reviewed dozens of court documents related to Sean’s case, including his Arizona Medical Marijuana Program ID card. His card was issued in 2016 and expired in 2017; it was current at the time of his arrest. His military service card also indicated that he is a permanently disabled veteran.

“Sadly, it’s not abnormal,” Isiah James, a veteran who works with the Black Veterans Project, told Fox News. "Sean told them, listen, I have PTSD, I have TBI, here’s my medical marijuana card. My marijuana is right there. The cops still don’t give a damn, the judge doesn’t give a damn. The court doesn’t give a damn because they don’t see any of that stuff. All they see is your blackness.”

Worsley’s incarceration was initially covered by the progressive advocacy group Alabama Appleseed. Their comprehensive article stoked outrage among the readers and helped a GoFundMe for the Worsleys’ legal fees exceed the initial $80,000 goal.

The article also sparked a response by District Attorney Andy Hamlin, the prosecutor in charge of Sean’s case. In an unsolicited post to his Facebook page, Hamlin defended the decision to jail Worsley and cited prior marijuana possession convictions as a reason to incarcerate the veteran.

“While it is true that Mr. Worsley is a decorated veteran of the United States military, it is also true that he is a criminal that has habitually broke the law in numerous states,” Hamlin wrote. “In fact, he is a three-time convicted felon, two of which were for Possession with Intent to Sell or Distribute a Controlled Substance in North Carolina.”

Worsley has never been convicted of a violent crime or one against an individual victim. In Alabama, Hamlin said Worsley was arrested with numerous containers of marijuana, two grinders and a digital scale. The Worsleys consented to a search of their vehicle, Sean provided the officer his medical marijuana ID card and let the officer know there was pot in the car.

Leah Nelson, the researcher behind the Alabama Appleseed’s reporting on Worsley’s case, said the North Carolina crimes cited by Hamlin stem from a single incident in 2011 that “involved marijuana and an attempt to pass a bad check.”

She took issue with another part of Hamlin’s statement that alleged Worlsey would not “conform” to the court-mandated drug treatment. In 2018, Worsley sought VA treatment in Arizona but was turned away because he had a medical marijuana card.

The contradicting treatment requirement and denial by the VA is a classic catch-22 for Worsley. He was prepared to attend a treatment program through the agency that provides his benefits, but was told he had no need and wouldn't be placed into a program by the VA.

He entered a guilty plea in October, 2017 and was sentenced to 60 months on probation, ordered to complete a drug treatment program and pay thousands in fees and fines. By the time he was sentenced, the Worsleys had moved from Arizona to Nevada. Sean was ordered to find drug treatment in Arizona, and he and his wife moved back to the state and lived in a month-to-month rental.

His probation officer in Arizona said their housing situation did not meet the requirements of stable housing and Worsley would have to contact the courts in Alabama to come to an agreement. While they waited on that, Sean attempted to comply with the rest of his conditions.

Fox News was provided with a copy of the VA’s assessment, which said that Worlsey “has legal documentation to support his use and therefore does not meet criteria for a substance use disorder or meet need for substance abuse treatment.”

The Worsleys struggled to maintain housing and jobs as a result of the felonies they had been charged with in Alabama. Eboni lost her vehicle, and Sean had to use a program that helps homeless veterans. The VA warned Worsley that they were going to end his monthly benefits in 2019 because, unbeknownst to him, Sean had missed a February court date.

Fox News was provided with a compilation of emails Sean sent to his lawyer, Scott Foster, between August and September of 2019. In them, Worsley acknowledges his responsibility to comply to the terms of his probation, and asks Foster and the courts to allow him the “opportunity to rectify the situation from here,” so that Sean could continue caring for Eboni and avoid another homeless situation.

During this time, Eboni had open heart surgery, and due to the status of his case and warrants issued for his arrest, Sean had lost job opportunities. On Sept. 8, 2019, Worsley emailed his lawyer and said he had been evicted and lost his vehicle due to the warrants against him. He said he didn’t have the money to return to Alabama at the moment.

It was early 2020 when Sean was pulled over by police in Arizona while he was driving to Eboni’s sisters to help with some home repairs. He had marijuana with him, however, due to his job loss and lapsed VA benefits, he couldn’t afford to update his expired medical marijuana card.

Arizona police didn’t think Alabama would extradite him over marijuana, according to the Appleseed’s reporting. Pickens County did want him extradited, and added the cost of his transport to his already substantial fines and fees.

“So, the position that we’ve taken is one of urging leniency and calling for a compassionate recognition of what Sean has gone through."

Now, Worsley has been held in Pickens County jail since early 2020 awaiting transport to the state’s prison system.

“So, the position that we’ve taken is one of urging leniency and calling for a compassionate recognition of what Sean has gone through,” Eric Goepel, co-founder of the Veterans’ Cannabis Coalition, said. “… Sean was literally just arrested for possession of cannabis while in the state of Alabama. And they used the presence of paraphernalia to essentially enhance his charge from possession to possession with intent to sell.”

Goepel has long advocated for the use of medical cannabis to treat military service-related mental and physical injuries. Currently, the VA does not officially recommend or prescribe medical cannabis for any ailments. That lack of recognition hasn’t stopped the overwhelming majority of veterans and service members from supporting medical marijuana as a solution.

A 2017 survey conducted by the American Legion found that 83% of veteran households said they think the federal government should legalize medical cannabis, and 82% said they would want to have medical cannabis as a federally-legal treatment option.

Furthermore, in a 2019 survey by the Iraq and Afghanistan Veterans of America, 75% of respondents said they’d be “very interested” in using cannabis as a treatment option if it were available. Recent guidance issued by the VA permitted staff to discuss medical marijuana with veterans, but not refer them to state-approved medical cannabis programs.

“Even in this very conservative state, there is a growing recognition that it doesn’t make sense to punish people so harshly for using marijuana."

This isn’t to say Alabama doesn’t recognize laws from other states. For instance, Alabama recognizes and honors all out of state concealed carry permits. If you’re licensed to carry a concealed handgun in Michigan or Ohio, you can carry that weapon in Alabama.

“Even in this very conservative state, there is a growing recognition that it doesn’t make sense to punish people so harshly for using marijuana,” Nelson told Fox News. “There’s a growing understanding that this is a poor use of limited police and corrections resources, and that the enforcement of these laws disparately impacts people of color.”

Nelson said that in 2018 economists found that Alabama spent about $22 million per year enforcing possession of marijuana laws.

“Our system failed Sean. There’s got to be a better way to handle a totally disabled Iraq War veteran with PTSD and TBI who had medical marijuana.”

Carroll, a professor of law at the Cumberland School of Law at Samford University in Alabama, said a solution to Worsley’s case could be a Veteran’s Treatment court. The specialty courts operate in a similar capacity to drug courts, where prosecution and conviction take a back seat to treatment and rehabilitation. There were no treatment courts in Pickens County when Worsley was arrested in 2016.

He said that while the prosecutors have broad discretion as to how they charge and prosecute crimes, it may be too late to change the sentencing in Worsley’s case.

“We are about to put Mr. Worsley in prison, and he’s 100% disabled,” Carroll said. “He has to have a caregiver. … [There’s] no guarantee that if Sean was to go in the Alabama prison system that he’d get the care he needed to treat his PTSD and TBI.”

"Know it’s not a switch that they turn off because they are back on U.S. soil. And so to be traumatized all over again by the country you fought for makes it much worse.”

Beyond the financial repercussions and hardships the Worsleys have endured, including mountains of debt and bouts of homelessness, the main concern is caring for the injuries Sean sustained in service to the country. Eboni said he’s already regressed with this PTSD, and is having increasing trouble communicating, sleeping and degenerating physical health.

“It’s really challenging to come home and live in the civilian world,” Eboni said. “… Know it’s not a switch that they turn off because they are back on U.S. soil. And so to be traumatized all over again by the country you fought for makes it much worse.”