Conservative filmmaker and scholar Dinesh D'Souza said Sunday that recent rioting and political division within the U.S. could lead to the "rise of citizen militias," if societal tensions are not quickly de-escalated and diffused.

"The problem is that you respond [to rioting] through the lawful authorities, which is through the police; if things escalate beyond a certain point then you call in federal assistance. If things escalate beyond that point you call in the military," he told Fox News during a phone interview. "Local governments and state governors are calling down the cops and licensing their own private gangs. If the cops won't protect us, then you're going to see the rise of citizen militias around the country."

"I'm not advocating this," he added. "I'm predicting it. It is a natural and inevitable response to the militarization of one side."

D'Souza, whose new documentary film "Trump Card" is set to come out next month, claimed the escalation of division by the Democratic party has set off a chain reaction, which has caused cities to break down and inspired hardworking taxpayers to start new lives in more rural areas of the country.

"There's a great line from the movie Breaker Morant, 'When one side violates the rules of engagement you would expect the same type of conduct from the other,'" he explained. "This has to be stopped, otherwise you're going to see things just deteriorate. Cities will become uninhabitable. The cities are the center of western civilization. You have commerce and you have culture. The Democrats are making it such that it's difficult to have either one. That means technology, commerce, and culture will decamp and move out of the city, which means they'll become like ghost towns."

D'Souza also spoke about the difference between the Democratic party now, compared to 25 years ago, saying that they have launched an effort to rebrand themselves as far-left while making life difficult for center-right people of faith.

DINESH D'SOUZA: IF YOU THINK TRUMP IS A WHITE SUPREMACIST, YOU SHOULD TALK TO A REAL ONE 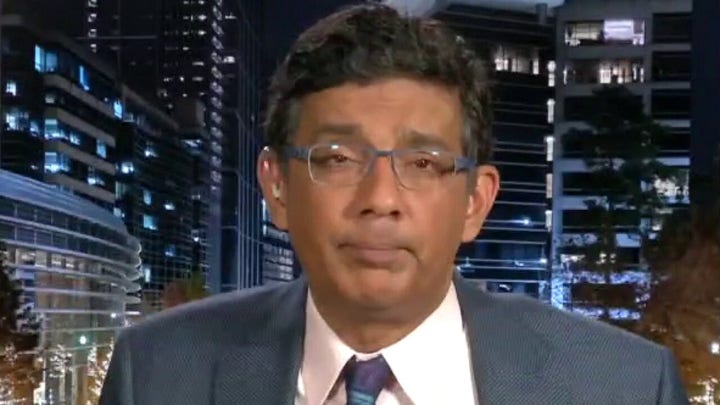 "Now, that being said, Christianity has actually become a bone of contention in the United States today," he continued. "For example, there are powerful attacks on religious freedom and on the churches. You see this in the double standard that the left applies when they want to shut churches down, but they don't want to shut protests down. They're basically saying that churchgoers should be second-class citizens as compared to protesters. Or that one enjoys a higher form of protection than the other."

He then touched upon the pro-life issue and said voting Democrat is directly at odds with the tenets of Catholicism and Christianity as a whole.

"Another critical issue -- especially for Catholics -- but also for Christianity generally, is the pro-life issue. On which, Catholic teaching doesn't really admit any room for doubt," D'Souza claimed. "It's not that you have some Catholic churches that are pro-life and other Catholic churches that are pro-choice. The Catholic Church institutionally is pro-life and it's pro-life based on the basic principle that life is a gift from God.. The pro-life comes out of a core doctrine of the faith which is that God made us and God cares about us and that our rights that come from God are inalienable. We couldn't give them up even if we wanted to."

When asked how the divisiveness today compares to the mood during the American Civil War, he expressed optimism about the U.S. finding a way to unite again. However, he said there'd be a cultural backlash first, beginning with a mass exodus from all major cities.

"The circumstances are very different from 150 years ago. In no way is civil conflict inevitable," D'Souza said. "There are many other solutions. There are different ways in which groups that are very different can coexist, but all these ways are going to be tested. The left is looking to create a coalition of minority victims that equals 51 percent so they can loot and oppress the other 49 percent. Our model is, one way or the other stop them from doing that... We will be essentially undoing 200 years of development of Western civilization. And commerce and culture will have to go elsewhere."

He drew a line in the sand between the GOP and Democrats, saying one seeks to create anarchy and chaos, while the other seeks a peaceful coexistence based on individualism, freedom and economic prosperity.

"If the Democrats want to try the approach that's called 'license the criminal gangs and start setting fires to businesses' that's their model," the Indian Immigrant to America said. "Our model is peace and prosperity and commerce and civility -- then let people choose if they want to live in burned-out Milwaukee or burned out Portland, or if they'd much rather live in a nice Republican suburb where it's really nice and there's good stuff to be found in stores."

"This is why the Democrat party relies on force," he continued. "Ultimately, they can only win if they can force us to live their way. Now, I don't think we're going to. We are no more going to submit to them and change our ways then perhaps they are going to submit to us. This raises the deeper question of how do we find a way going forward... We don't want the America they want and they don't want the America we want. The real question is, how do we coexist with each other. That's the real question of the future."

When asked if Joe Biden could overcome perceived mental health and fitness issues to remain his party's nominee, D'Souza said he believes Democrats wanted Biden at the top of the ticket, as a way to distract from their radicalized brand of fractured identity politics.

"I think that the Democratic plan is [to swap out] Biden after the election. They don't want Biden to keel over before the election," he added. "The reason they picked him is they think they needed a white male to camouflage the racial radicalness of their party. It's not like some chaotic process produced these horrible candidates. They chose him."

"Biden's not a natural Antifa type, but he is desperately trying to accommodate these people of whom he has no understanding whatsoever. They're aliens to him."

D'Souza's new film is set to be digitally released on Oct. 9.