The investigation into the Detroit Police Department’s handling of protesters in the city was caused by “protest pressure,” said Detroit Chief of Police James Craig on Wednesday.

“Some who are in political leadership are folding to the pressure by the protesters. So, it is not by an accident that you see the number of chiefs across the country that are leaving in large numbers,” Craig told FOX Business' David Asman on "Cavuto: Coast to Coast."

A federal judge in Detroit has ordered the city's police to stop using batons, shields, gas, chokeholds, rubber bullets or sound cannons against peaceful protesters for the next two weeks, according to reports.

The late Friday ruling granted a temporary restraining order to Detroit Will Breathe, a group that sued the city Monday, claiming excessive police force infringed on protesters' First Amendment rights, according to the Detroit Free Press.

Jack Schulz, who filed the lawsuit for the group, called the ruling a win.

"For a short period, we know that the police will not be able to use the brutal tactics they have in the past against peaceful protesters without violating a court order,” he said, the Free Press reported.

The lawsuit said officers’ use of force has left some protesters hospitalized.

The department is investigating around two dozens complaints against officers, including an officer who was charged with felony assault for allegedly hitting three photojournalists with rubber bullets, Craig said, according to the Detroit News. 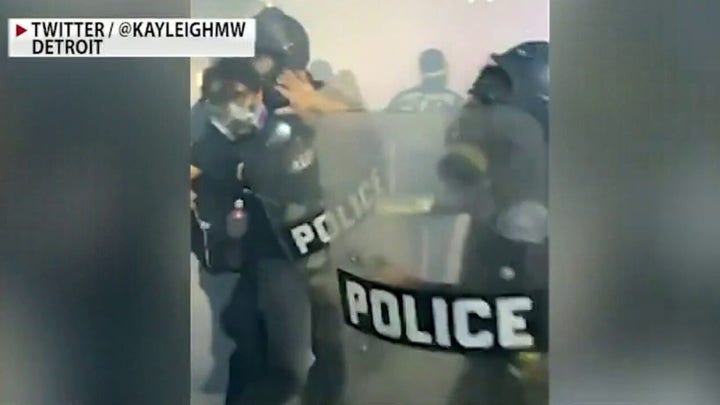 Craig said that the protesters have a hidden agenda behind bidding to upend public officials.

“It has nothing to do with the ethnicity or gender of the police chief. These folks are calling for mayors to resign as well. It doesn’t matter if you’re left or right. It has to do with what their agenda is and it is not supporting anybody who sits in an office, anybody who has been appointed as police chief,” Craig said.

Craig went on to say, “Let’s face it: we saw what happened in Portland. It’s this big cry over federal officers on the ground to protect their facility, but, then when they retreated the federal officers, they continued to riot, they continued to attack local police, so, it’s never about what it appears. They hide behind these issues, whether it’s the unfortunate death of [George Floyd.] But, it is not about that.”