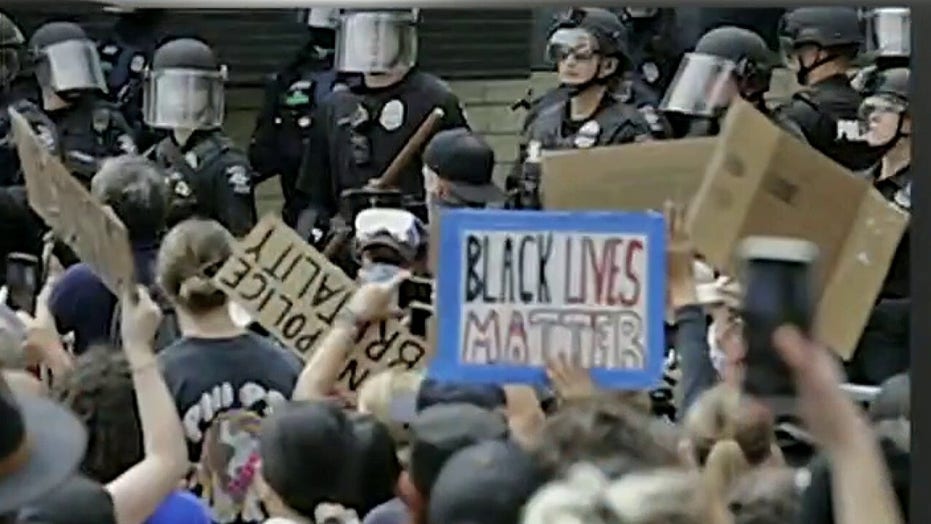 Over the last week, following the May 25 police custody killing of George Floyd in Minneapolis, communities nationwide have faced calls from critics to disband police agencies or redirect funding from law enforcement operations to community development programs.

Detroit, according to a report, has seen this decade an uptick in crime because of defunding the city’s police department.

The city cut back its police force and funding during a historic bankruptcy in 2014. Funding for the police department has fallen 20 percent in the last six years. Starting salary is $40,000 a year. Wages for cops were cut 10 percent and have never recovered, accounting for inflation. Health benefits for retired cops were stopped and pension payments postponed.

Detroit Police officers watch demonstrators in the city of Detroit, Michigan, on May 29, 2020, over the death of George Floyd, a black man who died after a white policeman knelt on his neck for several minutes. - Violent protests erupted across the United States late on May 29, over the death of a handcuffed black man in police custody, with murder charges laid against the arresting Minneapolis officer failing to quell boiling anger. (Photo by SETH HERALD / AFP) (Photo by SETH HERALD/AFP via Getty Images)

Supporters say the “defund the police” movement isn’t about eliminating police departments or stripping agencies of all of their money. They say it is time for the country to address systemic problems in policing in America and spend more on what communities across the U.S. need, like housing and education.

But in Detroit, gutting police department budgets has helped a downward spiral.

“We don't have enough police as it is,” said Rochelle Jones, a working mother of two. “People are acting the fool out here, and now you know the police aren't going to be coming around this summer with all that's going on. So what are the children supposed to do.”

Detroit police officers point out protesters to arrest who were throwing rocks at the police after they dispersed the crowd, as protesters march through the streets of Detroit, Michigan for a second night May 30,2020, protesting the killing of George Floyd who was killed by a white officer who held his knee on his neck for several minutes during an arrest in Minneapolis on Monday. - Curfews were imposed on major US cities as clashes over police brutality erupted across America with demonstrators ignoring warnings from President Donald Trump that his government would stop the violent protests "cold." (Photo by SETH HERALD / AFP) (Photo by SETH HERALD/AFP via Getty Images)

During 80 days of the coronavirus lockdown, 18 children were shot in Detroit.

The crime is a way of life that most residents just deal with as a normal.

India Williams was shot just over five years ago. “All I want from the man who shot me is an apology,” said India, now 12.