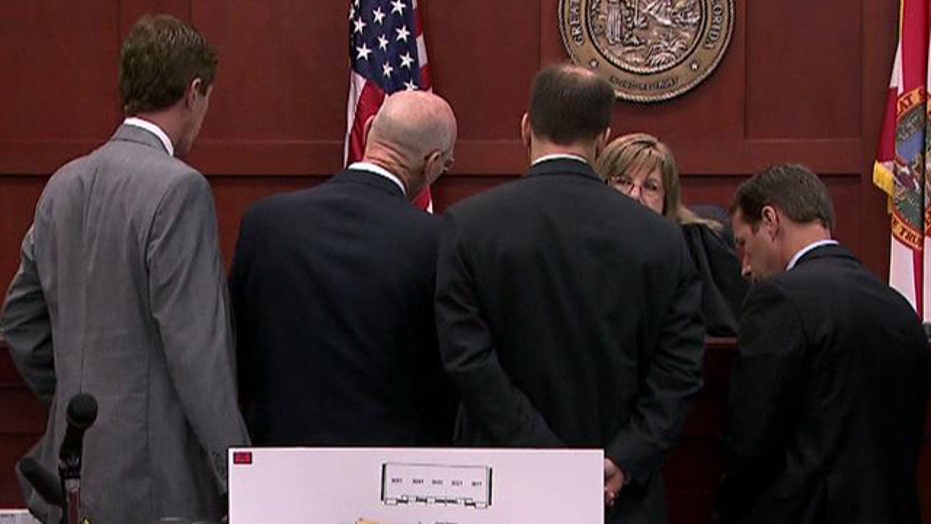 The Sanford police detective who questioned George Zimmerman the night he shot Trayvon Martin became the latest prosecution witness to appear to do more harm than good to the state's case, recalling a somber conversation that touched on Zimmerman's faith and the fear he said he felt when Martin told him "You're going to die tonight."

Detective Doris Singleton testified Monday that Zimmerman seemed somber and conflicted as she interviewed him after the February 2012 shooting. She said Zimmerman asked her about the crucifix around her neck and buried his head in his hands upon learning Martin had died.

"I had a silver cross on and he asked me if I was Catholic," Singleton said during testimony. "I said, 'No. I'm Christian. Why are you asking?'"

She said Zimmerman replied, saying that he had noticed the cross and told Singleton that it was "always wrong to kill" someone.

"I said to him, 'If what you're telling me is true then I don't think that's what God meant. [That] you couldn't save your own life,'" she told the court.

Singleton testified that a shocked Zimmerman replied, "He's dead?" to which she said, "I thought you knew that."

Assistant Prosecutor Bernie de la Rionda appeared frustrated at times by the prosecution witness' testimony, which, like previous witnesses put on by the state, at times seemed to put Zimmerman in a sympathetic light. Several times, De La Rionda turned his back on the witness stand and looked to his co-counsel, almost in frustration.

Audiotape of Singleton, who did not respond to the crime scene, was played in court. On it, Zimmerman stated that Martin seemed suspicious because he was, "taking his time, and looking at all the houses" while Zimmerman was patrolling the gated community. Zimmerman said Martin "jumped out" at him from the bushes and said, "What the f--- is your problem, homey?" The defendant claimed on the tape that he responded by saying that he didn't have a problem, to which Martin responded by saying, "Now you have a problem," and punched him in the nose.

Zimmerman said on the tape that the strike caused him to fall to the ground and Martin got on top of him and started to throw more punches.

"He was whaling on my head and I was yelling for help," Zimmerman can be heard saying to Singleton on the tape. "He put his hands on my nose and said, 'You're going to die tonight.'"

He added that he thought Martin was going for his gun, before he pulled on it and shot the young man.

The testimony came as the prosecution began the second week of testimony in Zimmerman's murder trial with a voice analyst who said it was "impossible to determine" the age of the person who was heard screaming on the 911 call.

Hirotaka Nakasone, an FBI audio voice analyst who examined eight audio recordings related to the February 2012 shooting of Trayvon Martin, said he was unable to identify or even peg an age to the person whose screams were heard on the tape. He said the pitch of one's voice goes "all over the place" under extreme stress.

It "was not possible to determine" the age of the person who was screaming, for approximately 2.5 seconds, he said under questioning from assistant prosecutor Richard Mantei. "Guessing age is a little complicated."

The issue is critical, because Zimmerman claims to have acted in self-defense when he shot the 17-year-old Martin. Determining who was doing the screaming could go a long way toward bolstering -- or undermining -- his defense. Prior to testimony beginning in the case, the prosecution had tried to block Nakasone in a Frye hearing, as they sought in vain to admit audio experts that said the voice was Martin's.

On cross-examination by defense attorney Don West, Nakasone said people who harbor preconceptions or "a bias" prior to hearing a recording could make a mistake in identifying the speaker.

"There is always that danger," Nakasone said.

During re-direct questioning by the prosecution, Nakasone stated that he had advised the Tampa Field Office of the FBI not to attempt a re-enactment because of too many variables that could have affected the results.

Former lead investigator for the Sanford Police, Christopher Serino also took the stand Monday afternoon , when a series of audio and video recordings were played for the court.

One was of an interview conducted with Zimmerman at the police station in which Serino raised the possibility of racial profiling by asking him, "had this person been white, would you have felt the same way?" Zimmerman replied, "Yes."

Also during his testimony, Serino said that he thought it was "different" that Zimmerman wanted to to go to work and class the next day and that he does not believe that he "fell as soon" as he was hit.

Serino also said that he expected more inconsistencies in Zimmerman's story. He originally suggested that Zimmerman be charged with manslaughter.

He thought that Zimmerman's injuries were "lacking" with his account and he had concerns as to why he didn't identify himself to Martin.

When asked at the end of the day by defense attorney Mark O'Mara about his suggestion to Zimmerman that there was a strong chance that there would be videotape of the incident, Serino said Zimmerman was happy about the possibility.

"I believe his words were, 'thank god. I was hoping somebody would have videotaped it."

When asked by O'Mara what that response indicated to him, Serino said, "Either he was telling the truth or he was a complete pathological liar."

The defense followed up by asking Serino if pathological liar was taken off the table, did he think Zimmerman was telling the truth. Serino flatly replied, "Yes."

More than 20 witnesses testified during the opening week of a trial that has opened up national debates about race, equal justice, self-defense and gun control.

Zimmerman has said Martin was banging his head into the concrete sidewalk behind the town homes in a gated community. Zimmerman is charged with second-degree murder and has pleaded not guilty.

Zimmerman defense attorney Mark O'Mara said at the end of last week that the trial was progressing at a faster pace than anticipated, but that he was reserving judgment on the prosecution's case so far.

"We're in the middle of it. They've got a lot more to show. These things build up slow, and it's sort of like pieces of a puzzle," O'Mara said. "People say, 'wait a minute, I can't see the picture yet.' They're very good prosecutors, they're gonna do a very good job, and they're gonna put on their evidence. We'll see how it goes. We're certainly ready to respond to it."

Zimmerman, 29, could get life in prison if convicted of second-degree murder. The state argued during its opening statement that Zimmerman profiled and followed Martin in his truck and called a police dispatch number before he and the teen got into a fight.

Zimmerman has denied the confrontation had anything to do with race, as Martin's family and their supporters have claimed.

She testified that Martin told her he was being followed by "a creepy-ass cracker." But it was her testy cross-examination exchanges with defense attorney Don West that commanded the most attention.