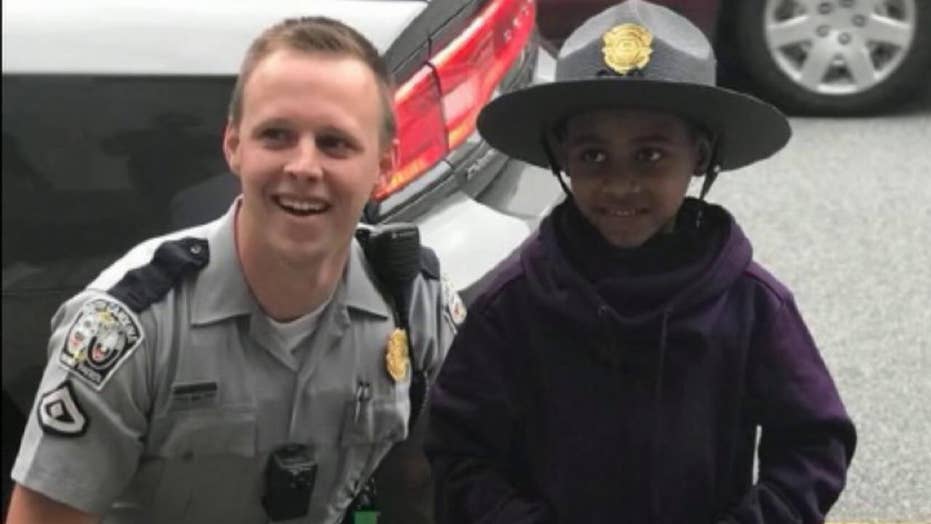 Six-year-old Lamar Richardson decided he wanted to be a police officer after meeting the trooper.

A young boy had stars in his eyes after a South Carolina trooper helped his family during a car trouble episode over Memorial Day weekend.

Lamar Richardson, 6, of New Castle, Del., told his older cousin Jaybryana Lopez, 22, that he wanted to be a cop one day after South Carolina Highway Patrol Trooper Jay Gardner came to the rescue, FOX 29 reported.

Lopez told FOX 29 she called police after their family’s car ran over a metal rod while on their way home to Delaware.

"When we went over it, it popped our tire, took out the engine and the oil. Oil leak and everything," Lopez said.

She said the trooper was eager to help the family and even drove them an hour out of his jurisdiction to get them a rental car at an airport.

During the incident, the young boy and the trooper bonded. A viral video showed the young boy connecting with Gardner and giving him law enforcement tips.

"He let Lamar play all in his car, he let him try different buttons and pressing the horn. Everything possible he let him do and Lamar was just so excited," Lopez said.

Following the ordeal, Lamar told Lopez he wanted to be a cop when he was older.

Lamar’s family posted the video of the boy bonding with the trooper in order to help get some recognition for Gardner, who they said went “above and beyond” to help them. Lopez said Gardner’s wife posted on social media that her husband seemed to be in a better mood when he came home from work that day.

"She was so happy to hear about him being happy when he got home and helping us and making my little cousin want to be a cop," Lopez said.