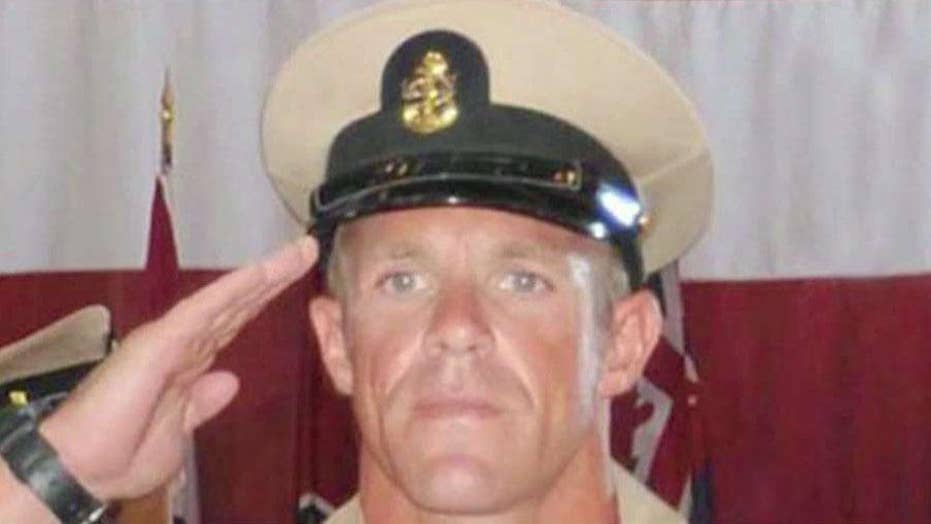 Brother of Special Operations Chief Edward Gallagher speaks out on 'Fox and Friends.'

The brother of a decorated Navy SEAL leader alleged to have killed an injured ISIS prisoner of war in Iraq – amongst other war crimes – is now accusing the investigators behind the claims of trying to “take down” an “elite warrior” so they can advance their own careers.

Sean Gallagher’s criticism of the Naval Criminal Investigative Service comes as a military judge this week is preparing his recommendations on what charges Edward Gallagher, a highly lauded special warfare operator who has racked up numerous awards during his eight tours of duty, should face.

The 39-year-old and married father of three currently remains jailed in a Navy brig in California amid disputed accusations he repeatedly plunged a knife into the bloody, wounded body of a young ISIS fighter and fired sniper rounds at innocent civilians in Iraq.

“This investigation is not about justice and the truth, it’s about a win,” Sean Gallagher told Fox News, while comparing the relationship between the NCIS and the Navy SEALs to one between a hammer and a nail.

“A SEAL is a shiny, golden nail where if you take them down it makes you look good,” he added.

Edward Gallagher was undergoing a medical screening at Camp Pendleton and was in the process of transitioning to a non-combat advisory role for the Navy SEALs, his brother says, when he was taken into custody in September. Gallagher was planning to retire in the spring.

Prosecutors reportedly said Gallagher was detained for trying to intimidate witnesses to the alleged crimes. But Sean tells Fox News that it was a misunderstanding -- and that his brother was merely venting in text messages to his friends, some of whom had been contacted by the NCIS, “about false accusations.”

Sean says his brother now doesn’t have full access to his lawyers as he remains in pre-trial confinement, awaiting his fate.

Born into a military family whose service record dates back to World War II, Gallagher followed in the footsteps of his father – a West Point graduate and retired lieutenant colonel – and enlisted in the Navy in 1999.

Years later, he became the first non-Marine to graduate from the Marine sniper school and in 2005, became a Navy SEAL, according to a biography of Gallagher on a website dedicated to fighting for his release.

“As a SEAL Eddie would continue to excel, rising not only in rank but as a true leader,” the biography continues. “He became lead sniper, lead platoon medic, lead breacher, fire team leader, master training specialist, squad leader and eventually, lead petty officer where he was in charge of an entire SEAL platoon deployed to the Middle East.”

He fought in Iraq and Afghanistan several times, reaching the status of what Sean described as a “modern day war hero” in an interview with "Fox & Friends."

But it was during Gallagher’s last combat deployment in 2017 he lost his way, prosecutors say, and “decided to act like the monster the terrorists accuse us of being.” NCIS launched an investigation into Gallagher this April.

Charge Sheet For The Navy S... by on Scribd

THE CRIMINAL CASE AGAINST GALLAGHER

The Navy’s three-page criminal count sheet against Gallagher now lists a slew of alleged offenses, including premeditated murder, drug abuse and willfully firing off his weapons “under circumstances such as to endanger human life” and “of a nature to bring discredit upon the armed forces.”

A preliminary hearing was held last week at Naval Base San Diego to help determine whether the case will head to a trial. Prosecutors at the hearing, citing accounts from fellow Navy SEALs gathered by the NCIS, claimed Gallagher shot an Iraqi girl walking along a riverbank and an elderly man holding a water jug.

In May last year, Iraqi forces in Mosul caught an Islamic State fighter aged in his teens, who was left battered and bloody from the combat.

Investigators allege while the teen was receiving medical treatment from SEAL medics, Gallagher walked up and stabbed him in his neck and side with a knife, killing the fighter. Then, they say, he posed for photographs with the fighter’s body, holding his head in one hand and his blade in the other – and sent one of the images to a fellow SEAL with the caption “I got him with my hunting knife.”

And when some of the SEALs in Gallagher’s platoon tried to report his alleged misdeeds, they were met with death threats – from Gallagher himself, prosecutors reportedly claimed.

“Does the public still believe we are the good guys, because Chief Gallagher decided to act like the monster the terrorists accuse us of being?” Navy prosecutor Chris Czaplak asked a military court, according to a New York Times account of the hearing. “He handed ISIS propaganda manna from heaven. His actions are everything ISIS says we are.”

Sean Gallagher, right, says he believes his brother has been falsely accused and is calling on President Trump for help. “We are really thankful that this time in history we have a president that we are hoping can come to our assistance that would look at the grievous nature of his treatment of the abuse of power by NCIS and prosecutors and come to our aid," he said in a recent interview with 'Fox and Friends'. (Courtesy Sean Gallagher)

Reports say Gallagher, dressed in uniform, did not testify during that hearing. He, Sean and his legal team are denying the charges, and top Iraqi military officials also have spoken out against what is alleged to have transpired.

“Everything that has been said….is fake news in a way,” Sean Gallagher told "Fox & Friends" this past weekend. “It’s just complete fabrication, it’s rumor.”

Sean also suggested his brother is in his current predicament because “there were a few malcontents of guys that didn’t like being reprimanded for not wanting to engage in combat.”

Iraqi Emergency Response Division commander Maj. Gen. Abbas al-Jubouri, in an interview with the NCIS in Baghdad that was transcribed and obtained by the Navy Times, said Gallagher is the "best Chief" of any of the American forces he has worked with.

But he is also, according to al-Jubouri, “very strict with his men."

“He was an a--hole to them, like I am an a--hole to my men — because you have to be as a leader,” the commander reportedly told the NCIS interviewer. “He was very aggressive and hard on his men, never wanting to stop working or take a break. Chief Ed never wanted to stop and he worked all the time."

Edward Gallagher was hard on his men, multiple people close to him say. His brother, Sean, says there were a "few malcontents of guys" alongside Edward overseas "that didn’t like being reprimanded for not wanting to engage in combat." Gallagher's lawyer also has echoed those sentiments. (Courtesy Sean Gallagher)

Al-Jubouri added he was in Mosul when the young ISIS fighter was captured that Gallagher is alleged to have killed. Al-Jubouri said the teen was found “bleeding badly” from gunshot wounds “with little chance of survival.”

One of al-Jubouri’s aides, Col. Issa Kadhim, reportedly added in a separate NCIS interview that he saw SEAL medics give the fighter “three bags, tubed his side, and worked on his leg” when they were trying to save him, in hopes of eventually interrogating the teen.

One thing al-Jubouri says he did not see was Gallagher attacking the wounded fighter.

“No. Why would he do this? There was no need for this," he reportedly told the NCIS, insisting the teen died from gunshot wounds.

"If I wanted to kill someone, I wouldn’t do it in front of witnesses," he added. "There were 20-plus people out there, including several Iraqi officers. [Gallagher] would never do that."

"He always had his [spotter] with him. If his [spotter] saw this, he would have told of this," the commander said, according to the transcript obtained by the Navy Times.

The claims lodged against Gallagher by the NCIS, the Navy's investigative arm, are being disputed. Sean Gallagher says its investigators are treating the case like a trophy hunt to 'take down' a SEAL, so a few can advance their careers. The NCIS, in response, tells Fox News that it cannot comment on the ongoing investigation.

“According to NCIS, both vividly recall the event, and both are adamant that Chief Gallagher only tried to save the mortally wounded ISIS fighter, who died of his injuries — not at the hand of Chief Gallagher,” Stackhouse wrote in an e-mail to the Navy Times. “This was completely ignored by NCIS because it does not fit with what NCIS had already decided to believe.”

Sean tells Fox News that the rest of the charges his brother could face were part of an effort by the NCIS to drum up anything they can find to make Gallagher look like a “monster.

“NCIS and the prosecution want a win by taking down a Navy SEAL -- Americans should be outraged,” he told Fox News.

The NCIS, when contacted by Fox News and asked to respond to the statements from Sean Gallagher and the Iraqi officials, said the matter “is an open investigation so we cannot provide comment at this time.”

Gallagher, meanwhile, says he is expecting that his brother will eventually face trial sometime next year.

“My brother has been eager for a long, long time now to clear his name and actually have witnesses come and testify on his behalf,” he told "Fox & Friends."