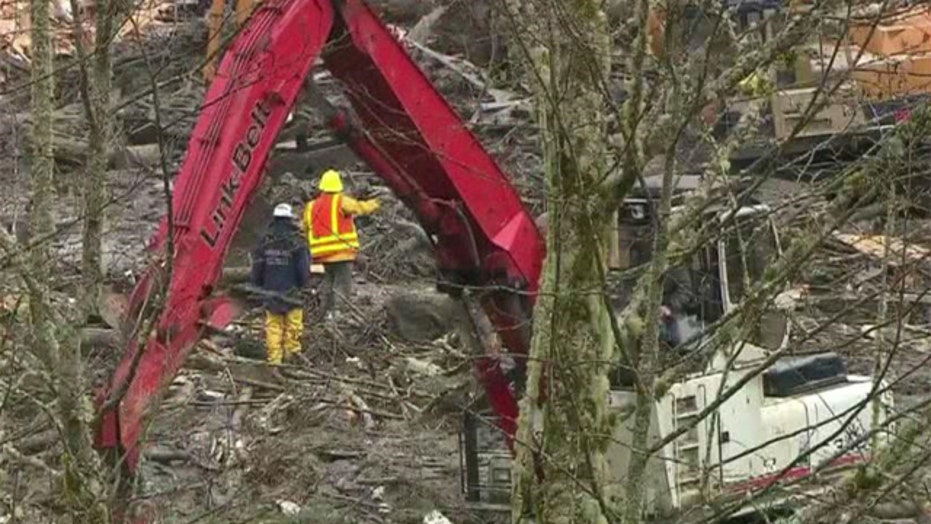 Death toll at 17, expected to rise

The official death toll in the massive Washington state mudslide stood at 17 Friday after authorities delayed an announcement they said would substantially raise the death toll to allow the Snohomish County medical examiner's office to continue with identification efforts.

Snohomish County Fire Chief Travis Hots told reporters Friday that 17 bodies were recovered in the rubble, but authorities have acknowledged the deaths of at least 25 people. Reports of more bodies being found have trickled in from relatives and workers on the scene.

Searchers are working from a list of 90 missing people, which equates to about half of the population of Oso, a North Cascades foothills community some 55 miles northeast of Seattle.

There are no more phone calls being made out of the Snohomish County Emergency Operations Center to determine whether some on the list were away and just haven't checked in since Saturday morning's slide.

Authorities have all but eliminated the possibility that some people on the list may have been out of the area and simply have not checked in, and they warned the chances of finding anyone alive amid the tons of silt and mud was slim.

Hots said Friday that authorities were also working to ensure that residents in the area are safe from an additional set slides, as more heavy rain rain hits the region, saturating areas that were previously dry.

The massive mudslide on Saturday is among the worst tragedies in Washington state history.

The 1980 eruption of Mount St. Helens killed 57 people and a 1910 avalanche near Stevens Pass swept away two trains and killed 96.

"We do know this could end up being the largest mass loss of Washingtonians," Gov. Jay Inslee said Thursday. "We're looking for miracles to occur."

The governor has asked for more federal assistance, saying $4.5 million was expected to be spent on the response to the mudslide. Inslee's request was to expand Monday's federal emergency declaration that provided response teams and equipment.

Rain fell on the searchers Thursday, but the water levels on the eastern side of the slide area receded and uncovered flattened homes and crushed cars that previously had been inaccessible.

Boats searched the area with dogs and crews inserted underwater cameras into vehicles to see if anybody was inside. Excavators pulled one car out of the muck, but it was unclear if they had discovered anybody inside.

The searchers walked on plywood pathways to keep from sinking into the sucking slurry. The moisture made the already treacherous surface even more unstable for workers exhausted after days of searching.

"If you could imagine houses, trees and a bunch of mud put in a blender, run for a bit and dumped back on the ground, that's what it looks like," said Washington National Guard Master Sgt. Chris Martin.

It's not only the people who are showing signs of strain.

The dogs leading searchers to possible human remains can sense stress, incident spokesman Bob Calkins said. They also can become bored by the repetition, and their handlers must take them away from the work area for a time, he said

"The real key is for the handlers to stay positive, because stress on the part of the handlers goes right down the leash to the dogs," Calkins said.

Petersen said he arrived on the scene to help look for survivors to find that work had stopped. A firefighter informed him and others that the infant had been found, Petersen said.

He said the news provides closure for the family.

"We spent a lot of time together," he said of the baby girl.

A 5-month-old boy injured in the mudslide has been updated from critical to serious condition and is breathing on his own, Harborview Medical Center spokeswoman Susan Gregg said.

Harborview Medical Center spokeswoman Susan Gregg said a 5-month-old baby boy injured in the Oso mudslide has been upgraded from critical to serious condition in intensive care and is breathing on his own. The baby's mother is in satisfactory condition, Gregg said.

Three other people are hospitalized with injuries sustained in the slide.