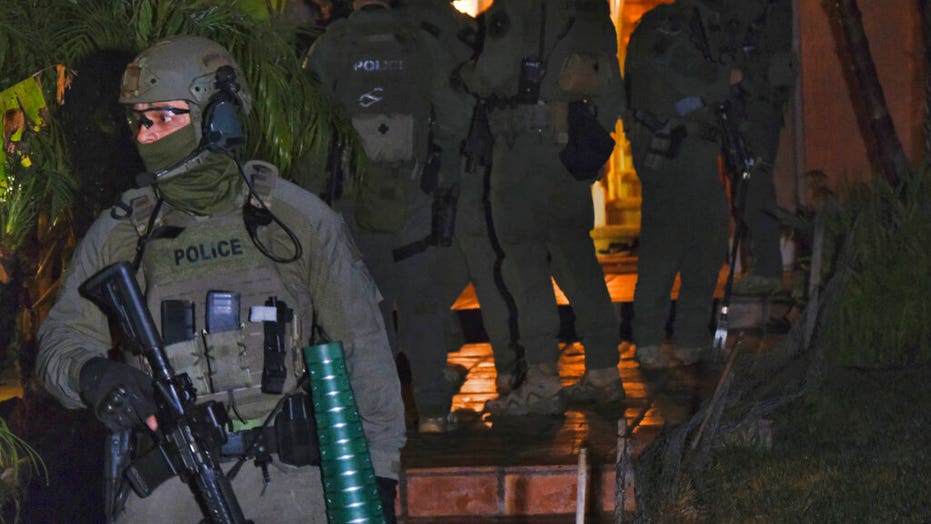 Agents with the Drug Enforcement Administration (DEA) made sweeping arrests across America on Wednesday, taking 250 members of a notorious Mexican drug cartel into custody -- 600 in total over the six-month operation known as "Project Python."

Top members of the Jalisco New Generation Cartel, referred to as CJNG, were toppled in the raids that resulted from the single largest strike by U.S. authorities against the group, with 350 indictments handed down, 15,000 kilos of meth seized and nearly $20 million recovered from the sprawling drug operation, according to the DEA.

Arrests fanned out across the U.S. in states including Illinois, Indiana, California and Wisconsin.

DEA agents take a suspect into custody during an arrest of a suspected drug trafficker on Wednesday, March 11, 2020 in Diamond Bar, Calif. In early-morning raids, federal agents fanned out across the U.S., culminating a six-month investigation with the primary goal of dismantling the upper echelon of the Jalisco New Generation Cartel, known as CJNG. (AP Photo/Richard Vogel)

The investigation stemmed from an Executive Order signed by President Trump "prioritizing the dismantlement of transnational criminal organizations," in line with his administration's crackdown to staunch the flow of illegal immigrants from Mexico that he says have contributed to violent drug-related crime in the U.S.

"We deemed CJNG one of the highest-priority transnational organized crime threats we face," Assistant Attorney General Brian A. Benczkowski of the Criminal Division said in a statement.

Project Python's mission is ongoing as they seek to nab the leader of the CJNG operation, Nemesio “El Mencho” Oseguera, who is one of the most wanted men in America, with a $10 million reward for his capture.

Last month, El Mencho’s son, Ruben Oseguera Gonzalez, also known as “Menchito” and second in command of CJNG, was extradited from Mexico to the United States on charges of alleged drug trafficking and retaliatory firearm use. El Mencho’s daughter, Jessica Johanna Oseguera Gonzalez, was arrested in the United States on Feb. 26 on financial charges related to her alleged criminal violation of the Foreign Narcotics Kingpin Designation Act.

The gang controls between one-third and two-thirds of the U.S. drug market. It is so violent that members leave piles of bodies in streets and hanging from overpasses in Mexico, and they fill the city of Guadalajara with mass graves. They carry machine guns and hand grenades. They once used rocket launchers to shoot down a Mexican military helicopter.