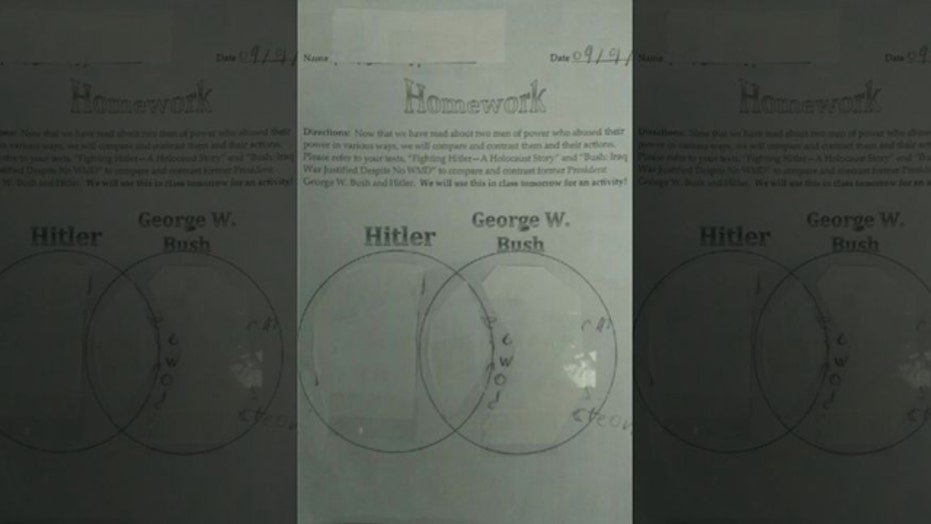 A public school teacher in Washington who instructed sixth-graders to compare former President George W. Bush to Adolf Hitler has learned her own lesson, according to district officials, but critics wonder why she still has a job.

D.C. Public Schools Chancellor Kaya Henderson responded to the controversy late Wednesday on Twitter, saying no curriculum intended to make the comparison “in any way” and that the district and unidentified teacher are “deeply apologetic” about the matter. Henderson said the teacher has been ordered to apologize to the class.

Marc Thiessen, who worked for years as Bush’s speechwriter, said the teacher should be terminated immediately.

“A person who can’t tell the difference between George W. Bush and Adolf Hitler shouldn’t be teaching children,” Thiessen told FoxNews.com. “This isn’t even political bias, this is utter incompetence.”

The McKinley Middle School teacher sent students home with a Venn diagram instructing them to compare and contrast Bush and Hitler as part of a unit on “War and Peace,” according to a statement by district officials. It was left to the students to determine how Bush, the 43rd U.S. president who was elected to two terms, stacked up against Hitler, whose Nazi Germany perpetrated a Holocaust that killed more than 6 million Jews.

“This week, a DCPS teacher created a worksheet to assign as homework which asked students to compare and contrast President George W. Bush and Adolf Hitler, after reading two texts,” the statement read. “No DCPS curriculum materials suggest in any way that teachers should compare the texts in this manner or compare Hitler to any other individual. One text, ‘Fighting Hitler — A Holocaust Story’ is part of the current suggested materials. The text about President Bush is not suggested as part of the current year’s curriculum, but was included last year in a separate unit. The teacher deeply regrets this mistake, and any suggestion to malign the presidency or make any comparison in this egregious way.”

School officials will also send a letter home to families explaining the incident.

“The teacher admits to extremely poor judgment and short sightedness and will apologize to students,” the statement continued.

District spokeswoman Melissa Salmanowitz declined to identify the teacher to FoxNews.com or to indicate whether he or she will be disciplined.

The assignment shows a “level of ignorance that’s uncorrectable,” added Thiessen, who said he wasn’t exactly surprised by the assignment.

“I’m not shocked by anything that happens in D.C. Public Schools,” he said. “I feel sorry for the fact that there are parents who are actually stuck in a system who hires a person like that. With all the problems that D.C. Public Schools have, you’ve got a teacher who exposes children to this? This is the best they can find?”

Some critics are now calling on district officials to identify and terminate the teacher.

“Has the "Bush/Hitler" teacher been terminated? That sort of derangement is a danger to children,” one Twitter post read.