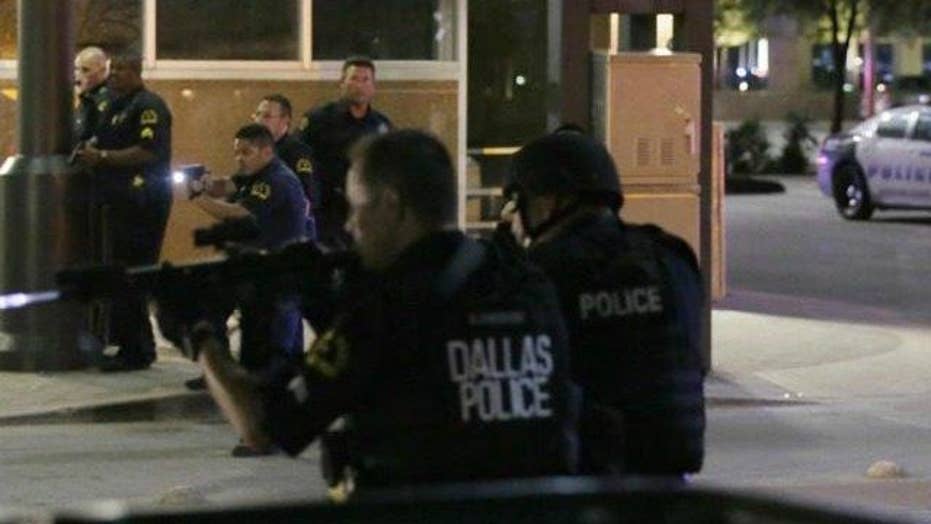 Are police being asked to do too much?

Is there too much pressure being put on law enforcement, especially with shrinking resources and support? The president of the Dallas Police Association, Ron Pinkston, goes 'On the Record'

Only days after watching five of his officers gunned down by an anti-white anti-cop shooter, Dallas Police Chief David Brown on Monday offered some advice to protesters who remain upset about recent police shootings: Join us.

Even as sometimes violent demonstrations against police continued Sunday night throughout the nation, in cities from Baton Rouge to Los Angeles, Brown made his argument for disaffected civilians to put down cardboard signs and pick up a badge.

“Become a part of the solution,” Brown said during a Monday news conference. “We’re hiring. Get off that protest line and put an application in. And we’ll put you in your neighborhood, and we’ll help you resolve some of the problems you’re protesting about.”

Brown knows something about becoming part of the solution. Dallas’ top cop since 2010, Brown joined the department in 1983 after, he said, watching his friends swallowed up by the crack cocaine epidemic.

“It broke my heart and it changed what I wanted to do,” he said.

He worked on patrol, SWAT divisions and internal affairs as his career ascended, leading to assistant chief of police in 2005, assistant city manager in 2007 and, finally, police chief in May 2010. Brown said he remains grateful to the city that gave him a chance to try to reclaim his neighborhood.

“They took an inner city kid like me with flaws and made me their police chief,” he said. “That’s an extraordinary city and they have supported me through very difficult challenges. You don’t see that everywhere.”

Asked about bridging the gap between cops and black youth, many of whom have renewed marching in the streets after controversial videos surfaced early last week of police shootings in Minnesota and Louisiana, Brown replied with a trademark mix of humor and understanding.

“I've been black a long time,” he said to laughs. “It’s not so much of a bridge for me. It’s everyday living. I grew up here in Texas. A third generation Dallas-ite. It’s my normal to live in this society that had a long history of racial strife.

“We’re in a much better place than when I was a young man here, but we have much to do – particularly in my profession.”

Brown chided lawmakers who he said have thrust too many problems on the backs of police officers instead of trying to solve the issues through legislative compromise. He cited mental health matters, drug addiction, education troubles and even loose dogs as issues that were now being hoisted upon what Brown described as overworked and underpaid police officers.

“That’s too much to ask,” Brown said. “Policing was never meant to solve all those problems. I just ask other areas of our democracy, along with the free press, to help us and not put the burden all on law enforcement to resolve.”

Brown said he and his family have received death threats since Micah Johnson’s rampage Thursday night into Friday morning in downtown Dallas. The shooter killed five officers and injured nine others in the deadly spree, but police have still had to watch their backs in the aftermath, Brown said, due to numerous threats continuing to be levied against officers.

“There is a heightened sense of awareness over threats we’ve seen all around the country,” Brown said. “We’re all on edge, we are, and we’re being very careful.”

Brown said he did not regret his decision to use a $151,000 police robot – the Remotec Andros Mark V-A1 – to blow the shooter up as negotiations failed and Johnson threatened more deaths. Brown said the plan was devised in a span of 15-20 minutes and he only had one question for the bomb techs.

“I asked how much [explosive] they were using and I said, ‘Don’t bring the building down,’” he said.