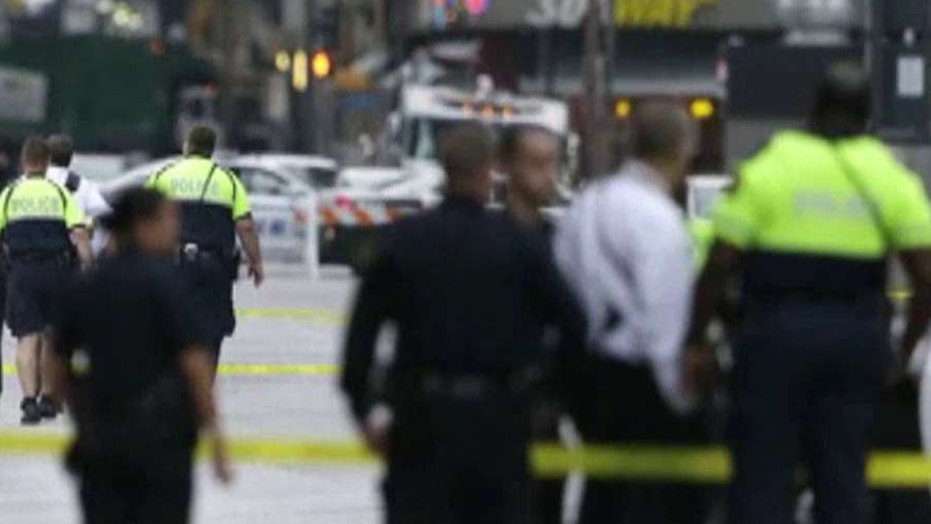 Dallas police in wake of ambush attack: We are hurting

Dallas police officers and SWAT units combed a parking garage adjacent to the department's downtown headquarters Saturday after a suspicious person was seen on the garage's second floor.

Authorities confirmed to Fox News that the person was spotted in an area of the garage reserved for police officers and employees and ran away when confronted. Approximately two hours after the original sighting, a search of the garage turned up no suspicious person or object.

Shortly after the search began, Dallas police confirmed that they had "received an anonymous threat against law enforcement across the city" and had taken "precautionary measures" to heighten security.

The parking garage incident highlighted the heightened tension among law enforcement officers across America after a week of violence following the deaths of two African-American men at the hands of police.

Maj. Thomas Castro told the Associated Press several general threats had been made against Dallas police, though nothing specific.

An armored vehicle was moved to near the department's downtown headquarters late Saturday afternoon and heavily armed officers carrying rifles were seen walking nearby. Police shut down a street in front of the department's headquarters, but members of the public were still able to walk about freely around the building. One man dropped to his knees in front of the makeshift memorial and began singing "Amazing Grace."

Police departments around the country have been the subject of violent threats this week after videos showing police shootings of black men in Louisiana and Mississippi.

On Saturday, a suburban Chicago woman was accused of posting a threat on Facebook to shoot any police officer who pulls her over and asks her to get out of the car.

Police in Bossier, La., say a man was jailed after posting a social media video in which he says he wants to shoot and kill a police officer. Investigators say the man made the video while sitting in a car that was behind a police unit at a fast-food drive-thru.

And in Racine, Wis., police say they arrested a man who posted calls for black men to kill white police officers and their families.

Later Saturday, the police department in the Gulf Coast town of Waveland, Miss., said it had received what authorities there deemed credible threats against officers.

Police Chief David Allen told The Sun Herald newspaper the threats had come via phone and social media and involved possible gunfire attacks Saturday night and Sunday. Extra police were to be on duty during the weekend.

Mawuli Davis, an African-American attorney and activist in Atlanta, said what's happening is a continuation of events in recent years because there has been no serious dialogue over issues of race and police encounters with black people.

Davis and his associates insist on peaceful protests as a means to an end, and indeed, most protests across the U.S. have gone on without a hint of violence. But until that serious discussion happens, he said he fears "we're going to continue to see this kind of tragic incident" like the Dallas attack.

"From an activist perspective, you're seeing a level of frustration and anger that very well may be at a tipping point," he said.

Tensions between police and African-Americans have been on the rise in recent years amid the high-profile deaths of several black men at the hands of law enforcement. The deaths have fomented unrest from Ferguson, Mo., to Baltimore and heightened calls for greater accountability of police, particularly in the urban, majority-black neighborhoods they patrol.

While race has not necessarily been a factor in every case, the deaths have become a rallying cry for groups such as Black Lives Matter who are calling for solutions to problems that plague African-American communities, from poor educational opportunities to joblessness to high incarceration rates.

Ryan Lenz, online editor and senior writer at the SPLC, told The Associated Press that the number of black separatist groups nearly doubled in 2015, mirroring a similar increase among white hate groups that has come against the backdrop of police killings that make frequent headlines.

While some committing violence may be influenced by hate groups, many who become radicalized do so without direct ties to the groups. Instead, they surf the web and allow their anger to grow in private at home, Lenz said.

"In the last couple of years we've seen this violence become an ever-present reality in our lives," Lenz said. "We are in a polarized political climate right now where the `us-versus-them' mentality has started to reign supreme."