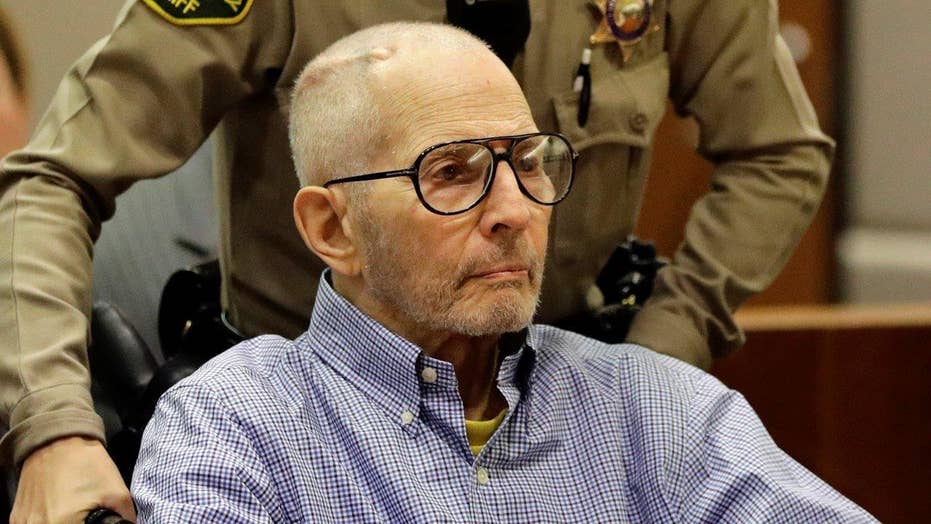 LOS ANGELES – Despite being held in custody, looking frail and getting rolled into court in a pink wheelchair, New York real estate heir Robert Durst is considered a danger to witnesses in the murder case against him, a prosecutor said.

Citing his $100 million worth and allegations that Durst knocked off his best friend, who was a witness in the 1982 disappearance of his wife, Deputy District Attorney John Lewin said that he wants to record video of testimony in case witnesses die or are killed before trial.

Witnesses are concerned about their safety, Lewin said Wednesday. He wants to preserve testimony from an unnamed witness "who has very important information" and Dr. Albert Kuperman, 85, who may have been the last person Kathleen Durst spoke with before her disappearance in New York.

The testimony would only be used at trial if the witnesses aren't available to testify.

"If Dr. Kuperman passes away," Lewin said, "we can't go back later and figure out anything he would have said. ... There is one way and one way only for this to become an issue. ... The witness at the conditional examination would then have to disappear, die or be murdered."

Defense lawyers objected to the suggestion that Durst, 73, posed a threat to anyone.

"That a man in a wheelchair is a threat to an 85-year-old doctor in New York," attorney David Chesnoff said, "is just hyperbole."

Chesnoff also challenged Lewin's suggestion that Durst killed and dismembered a Galveston, Texas, neighbor in 2001 because he was also a witness. Durst, who had been hiding out in Texas disguised as a mute woman, was acquitted of murder after claiming he killed the man in self-defense.

Lewin replaced the facts of the case with his own interpretation, Chesnoff said.

Judge Mark Windham set a Jan. 6 hearing in Los Angeles Superior Court to discuss the conditional testimony, though he tentatively set a Feb. 14 hearing for the testimony from the two witnesses.

Durst has pleaded not guilty to one count of murder in the killing of Susan Berman just before Christmas in 2000.

At the time, she reportedly was planning to speak with investigators about his wife's suspected slaying. She had served as an unofficial spokeswoman for Durst, her close friend from college days.

Durst was nabbed in New Orleans last year just before the final installment of a six-part documentary, "The Jinx: The Life and Deaths of Robert Durst," aired on HBO.

Prosecutors said police moved in to arrest him because they feared he would flee after seeing the damning conclusion that ended with him walking off camera with a live microphone and muttering to himself: "There it is. You're caught! What the hell did I do? Killed them all, of course."

In the moments before he uttered those words, filmmakers had confronted Durst with a letter anonymously sent to police in 2000 tipping them to the location of Berman's "cadaver" that matched handwriting on a letter he had sent her years before. Both envelopes misspelled her Beverly Hills address as "Beverley."

Durst acknowledged in a nearly three-hour interrogation after his arrest with Lewin that he was in the process of fleeing when he was arrested. He was found in a hotel with a false Texas ID, more than $40,000 cash, bags of marijuana, a .38-caliber revolver, a map folded to show Louisiana and Cuba, and a flesh-toned latex mask with salt-and-pepper hair.

The defense objected to taking any testimony before they have been provided with evidence in the case and without enough advance notice of the names of conditional witnesses.

Prosecutors have said they might want to record conditional testimony from eight to 10 witnesses and won't provide their names until shortly before any hearing, Chesnoff said.

The defense attacked Lewin for publicly filing a transcript and audio of his lengthy interview with Durst, which they claimed was improperly conducted and violated their client's rights. That issue is likely to be the subject of future arguments over the admissibility of the statement.

"I'm not going to be spreading the evidence in the public record," defense attorney Dick DeGuerin said outside court. "I'm very critical about that ... so we're not going to be guilty of the same thing."