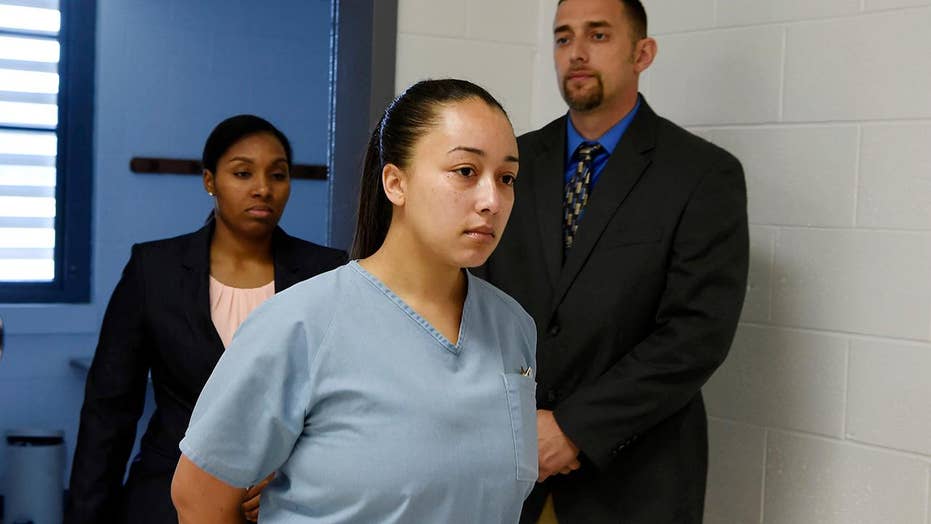 Cyntoia Brown, who received a life sentence at 14-years-old for killing a real estate broker, has been released from prison after 15 years.

Cyntoia Brown — the woman who became a cause celebre after a conviction for killing a man while she said she was a sex trafficking victim and later had her life sentence commuted — was released on Wednesday morning after 15 years served.

Brown, 31, was convicted in 2006 of killing Johnny Allen, a 43-year-old real estate agent, in Nashville, Tenn. Investigators said she shot Allen in the back of the head at close range with a gun she brought to rob him after he picked her up to have sex with her in exchange for money.

ALICE JOHNSON REFLECTS ON CLEMENCY GRANTED BY PRESIDENT TRUMP: 'THESE LAWS MUST CHANGE'

Cyntoia Brown, pictured here in May 2018, was released from prison on Wednesday. (Lacy Atkins/The Tennessean via AP)

Brown maintains that she shot him out of fear while he was reaching for a gun while in bed.

She said a pimp called "Cut Throat" forced her into prostitution and verbally and physically abused her after she ran away from her adoptive family in 2004. At trial, Brown's attorneys said she was the victim of sex trafficking and argued she lacked the mental capacity to be culpable in Allen's slaying, as she was impaired because her mother drank alcohol while Brown was in the womb.

CYNTOIA BROWN, SENTENCED TO LIFE FOR MURDER, GRANTED CLEMENCY: A LOOK AT HER CASE

Brown was sentenced to life in prison.

But in January, then-Tennessee Gov. Bill Haslam granted her clemency after celebrities — including Kim Kardashian and Rihanna — lobbied for her release.

Brown, now 31, was sentenced at 16 to life in murder for killing a man she claimed paid her for sex. (Lacy Atkins/The Tennessean via AP)

Haslam said it was too harsh a sentence for a crime Brown admitted to committing as a teen, especially given the steps she has taken to rebuild her life. She earned her GED and completed studies with Lipscomb University as an inmate.

"I thank Governor and First Lady Haslam for their vote of confidence in me and with the Lord's help I will make them, as well as the rest of my supporters, proud," Brown said in a statement released Monday.

Brown will remain on parole supervision, on the condition she does not violate any state or federal laws, holds a job, and participates in regular counseling sessions, per her commutation.

Before her release Wednesday, she met with prison counselors to design a plan for life on the outside, which will include time in a transition center and continuing coursework with the Lipscomb University program, Tennessee's Department of Corrections said.