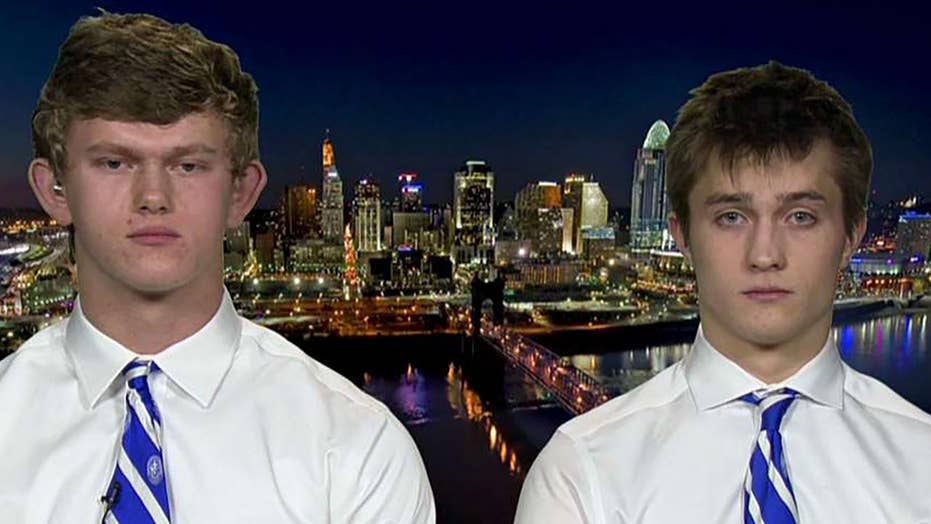 Seniors Sam Schroder and Grant Hillmann speak out on 'Fox &amp; Friends' on the firestorm over the Capitol Hill incident.

Students at the Kentucky high school closed yesterday amid threats stemming from a viral video recorded during last week’s March for Life rally say they're ready Wednesday to “get back together as a community.”

Covington Catholic High School reopened Wednesday with a police presence, but Sam Schroder, a student who was at the rally in Washington, D.C. told "Fox & Friends" that “everybody feels safe."

“I think that closing the school down yesterday was a good move to play it safe but I think today everybody – I think they are ready to go back, get back together as a community,” he said.

The school has come under fire after a video was posted on Twitter over the weekend that gave some commenters an inaccurate impression that the teens were harassing a Native American man, Nathan Phillips, following the pro-life demonstration. Subsequent video footage then released painted a different picture – yet the students have been met with a barrage of criticism and threats anyway.

“The threats, they have been horrible,” Grant Hillman, a Covington High School senior, who did not attend the rally, told "Fox & Friends" on Wednesday. “I have never heard such cruel things wished upon another human being, ranging from getting locked inside a building and burned alive to sexually assaulted by the clergy members – it’s just awful.

He added: “It’s really sad to see [people] with such a huge platform who [have] the ability to spread positivity to use it in such a negative manner to bully children."

Some families of students from the school have been reported to be considering legal action in the wake of the criticism and threats.

Schroder said he wasn’t sure how far along those developments are but they “definitely could be a good thing."

“I know how our school raises these kids, I know that no one from our school would be disrespectful,” he said.