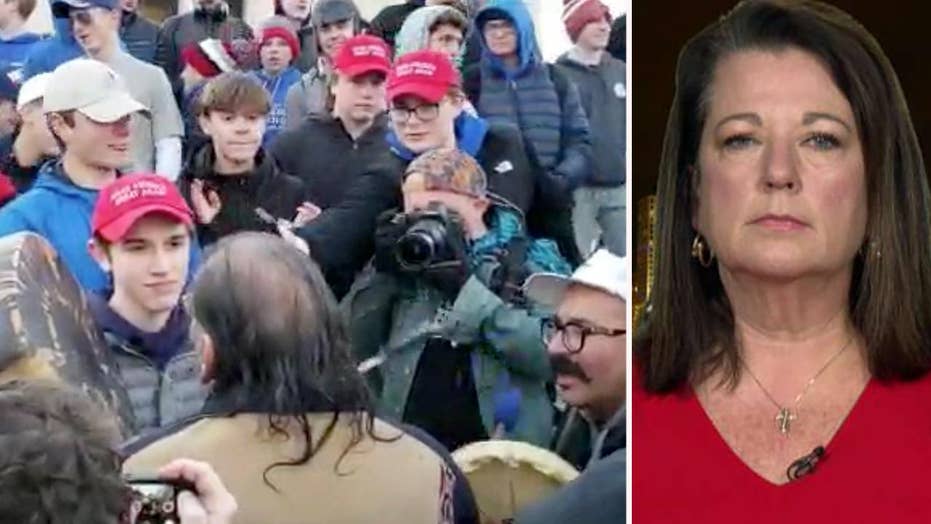 Covington Catholic chaperone: Our students were targeted for what they stood for and the color of their skin

A mother who chaperoned Covington Catholic students during their trip to Washington says the now-viral confrontation with Native American activists was a result of Black Hebrew Israelites throwing 'horrific insults' at the teens. Jill Hamlin speaks out on 'Fox &amp; Friends.'

The Kentucky high school whose students are at the center of a viral video controversy after last week’s March for Life Rally says it will stay closed Tuesday due to safety concerns.

The announcement by Covington High School Principal Robert Rowe was made in a letter sent to parents, students and staff. Students from the Catholic school are said to be facing death threats – and have been widely maligned and vilified online – after a video clip emerged Saturday that gave some commenters an inaccurate impression that the teens were harassing a Native American man, Nathan Phillips, following the pro-life demonstration.

“After meeting with local authorities, we have made the decision to cancel school and be closed on Tuesday, January 22, in order to ensure the safety of our students, faculty and staff,” Rowe said. “All activities on campus will be canceled for the entire day and evening.  Students, parents, faculty and staff are not to be on campus for any reason.”

The Campbell County Boys Basketball team, which was supposed to be playing Covington tonight in a game, also announced its game was canceled Tuesday.

“Please continue to keep the Covington Catholic Community in your prayers,” Rowe said.

Subsequent video footage released over the weekend revealed the students were accosted and yelled at before Phillips and other Native American activists approached them. Another group – the so-called Black Hebrew Israelites – were heard shouting abuse at the students for wearing “Make America Great Again” hats.

Jill Hamlin, a chaperone mother who says she was there with her son and the students during the incident, told ‘Fox & Friends’ Tuesday she believes the boys were “targeted for what they stood for, which is Christianity and the right for life,” and “partially because of the color of their skin.”

“We were there for the March for Life – it’s an annual trip that the Covington Catholic High School goes to and we meet every year at the Lincoln Memorial at the end of the day to catch our buses,” Hamlin added. “We were not there for any other purpose other than to attend the peaceful March for Life, which we did.”

Nick Sandmann, a junior at Covington Catholic High School who was caught in the center of the controversy, spoke out for the first time on Sunday. He released a statement saying he and his classmates were taunted by a group of African-American protesters.

He said he was “mortified that so many people have come to believe something that did not happen -- that students from my school were chanting or acting in a racist fashion toward African Americans or Native Americans.”

“I did not do that, do not have hateful feelings in my heart and did not witness any of my classmates doing that,” he added.

Following the revelations of full video footage of the incident, some prominent social media users have backtracked their condemnation of the students -- though many have left their criticism and calls to reveal private information still live on social media -- admitting the initial footage didn’t reveal the full picture.

President Trump has offered support to the students, accusing the media of smearing the teenagers.

“Nick Sandmann and the students of Covington have become symbols of Fake News and how evil it can be,” he tweeted Tuesday. “They have captivated the attention of the world, and I know they will use it for the good - maybe even to bring people together. It started off unpleasant, but can end in a dream!”

Kenton County Commonwealth's Attorney Rob Sanders told the Cincinnati Enquirer on Monday that threats against the school and students are being investigated.

He didn’t reveal the exact nature of the threats, only that students and the school were threatened with actual violence.

"It's scary. My son works -- I have been nervous to have him even go to his job because I don't know who is out there and what they are doing," Hamlin told 'Fox & Friends' about the threats. "My husband was going to follow my son to school this morning because we just don't know what the volatility of the situation is with these people that react and they don't know the full story."