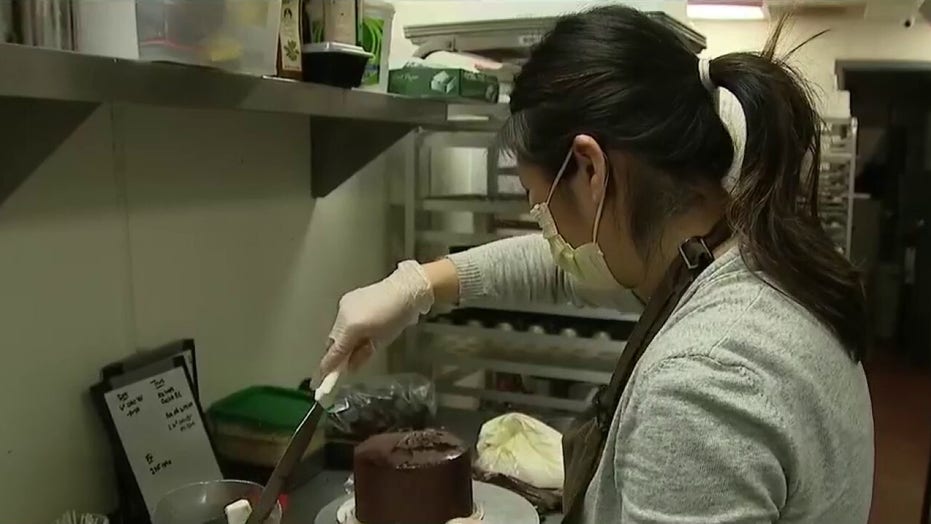 However difficult it’s always been to be homeless in New York City, it’s tougher and scarier now amid the coronavirus pandemic as shelters face unprecedented struggle.

For those living in close quarters in city-run shelters, there’s fear of exposure to COVID-19. The Department of Homeless Services has identified more than 650 cases and more than 50 COVID-19 deaths among the 17,000 single adults in its shelter system.

For the estimated 3,500 homeless New Yorkers who live on the streets, in extreme close proximity to New York City’s poshest neighborhoods, worries about disease are coupled with other new indignities.

Scores of them, opting to sleep on the subways, were removed from the trains by police in a clearance operation last week. And with so many closures of coffee shops, rehab centers, even the restrooms at Grand Central Station, it’s harder than ever to find a bathroom they can use or a place to take a shower.

In this Friday, April 24, 2020, photo, a visitor looks inside his bag of donated food for people in need from the Coalition for the Homeless organization, at St. Bartholomew's Episcopal Church in New York. (AP Photo/John Minchillo)

Juan de la Cruz, who oversees the St. Bart’s meal service on behalf of New York’s Coalition for the Homeless, says many of his clients -- despite their deprivations -- don’t want to stay at city-run shelters.

“People are scared to be there,” he said. “They don’t want to be inside because of the COVID-19 situation.”

But on the streets, he says, many lack “the simple things we take for granted.”

Before the pandemic, de la Cruz said, the meal service menus were often enhanced by food donations from nearby corporate cafeterias. Now, with most offices closed, the servings are repetitive: cartons of milk, oranges, soup, simple sandwiches.

In this Friday, April 24, 2020, photo, workers prepare bags of donated food for people in need through the Coalition for the Homeless organization at St. Bartholomew's Episcopal Church in New York. (AP Photo/John Minchillo)

The pandemic has posed many new challenges for the Department of Homeless Services, which is battling to minimize the spread of the disease in its shelters. It has moved several thousand single adults into individual rooms, including more than 1,000 hotel rooms. The city council is pushing a bill that would require individual rooms for all 17,000 single adults.

In all, the city has more than 57,000 people in its shelters, but most are families in accommodations with less risk of coronavirus infection and greater access to bathrooms.

Last week, the city implemented a new plan for reducing the number of homeless people sleeping on the subways, closing end-of-the-line stations overnight, with everyone aboard the late trains required to exit. Evacuated homeless people are offered services by outreach teams, including temporary lodging and medical assessments.

City officials said Monday that two homeless men were found dead on subway trains in a 12-hour period Friday and Saturday. The Department of Homeless Services said outreach workers had been trying to get both men into shelters.

Starting Wednesday, the entire subway system will be closed from 1 to 5 a.m.

In this Friday, April 24, 2020, photo, Juan De La Cruz, left, hands a bottle of hand sanitizer to a visitor who collected a bag of donated food through the Coalition for the Homeless organization at St. Bartholomew's Episcopal Church in New York. (AP Photo/John Minchillo)

In addition to the city’s shelter system, there are shelters run by charitable organizations, including the Bowery Mission, which has served hungry and homeless New Yorkers since the 1870s.

Available services include a mobile shower unit. Nonresidents who want to use it must sign up at breakfast time and return later in the day.

In this Friday, April 24, 2020, photo, workers add sandwiches to bags of donated food for people in need through the Coalition for the Homeless organization at St. Bartholomew's Episcopal Church in New York. (AP Photo/John Minchillo)

Another Manhattan shelter, housing more than 100 homeless young people, is run by Covenant House. It has remained fully operational during the pandemic, even while implementing social distancing. Some offices have been converted into isolation rooms, some social workers now conduct “virtual” check-ups, and one of the new activities for residents is making face masks.

“We’re dealing with youth who’ve already been traumatized, and this is further traumatizing them,” said Sister Nancy Downing, executive director of Covenant House NY. “Their fear was that we would close down and leave them.”