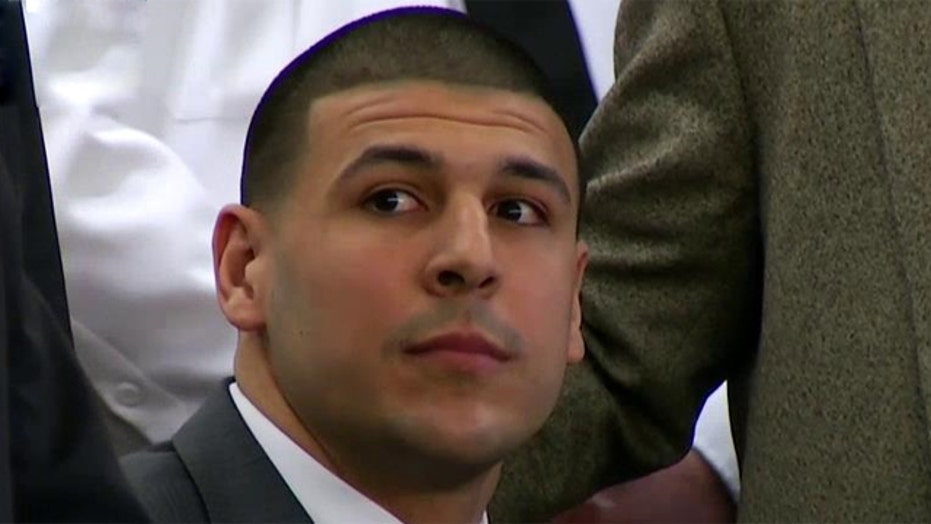 Aaron Hernandez, the former star tight end for the New England Patriots, was sentenced to life in prison without parole after being convicted Wednesday of first-degree murder in the death of his fiancee's sister's boyfriend, who prosecutors say may have known too much about two previous killings in which Hernandez is a suspect.

The hulking former Pro-Bowler, who commanded a salary of nearly $10 million per year and was one of the top young stars in the game as recently as three seasons ago, looked to his right and pursed his lips after the jury forewoman read the verdict. The conviction in the murder of Odin Lloyd, a 27-year-old landscaper and amateur weekend football player, carries a sentence of life in prison without the possibility of parole.

Hernandez's mother, Terri, and his fiancee, Shayanna Jenkins, cried and gasped when they heard the verdict. Shayanna Jenkins wept on his mother's shoulder. Hernandez later mouthed to them: "Be strong. Be strong."

The former football pro was also found guilty on firearm and ammunition charges.

Hernandez's lawyer acknowledged during closing arguments that he was at the scene when Lloyd was killed. But he pinned the shooting on two of Hernandez's pals, saying his client was a 23-year-old kid who didn't know what to do.

Prosecutors said Hernandez planned the killing and then helped cover it up.

Lloyd was shot six times in the middle of the night on June 17, 2013, in a deserted industrial park near Hernandez's home in North Attleborough. Prosecutors presented a wealth of evidence that Hernandez was with Lloyd at the time he was killed, including home security video from Hernandez's mansion, witness testimony and cellphone records that tracked Lloyd's movements.

Hernandez's lawyer, James Sultan, acknowledged for the first time during closing arguments that Hernandez was there when Lloyd was killed.

But the attorney pinned the shooting on two of Hernandez's friends, Ernest Wallace and Carlos Ortiz, saying his client was a "23-year-old kid" who witnessed a shocking crime and didn't know what to do. Wallace and Ortiz will stand trial later.

Prosecutors have suggested Lloyd may have been killed because he knew too much about Hernandez's alleged involvement in a deadly 2012 drive-by shooting in Boston. But they were not allowed to tell the jury that because the judge said it was speculation.

As a result, they never offered a motive beyond saying Hernandez appeared angry with Lloyd at a nightclub two nights before the killing.

Hernandez faces further legal trouble: He is awaiting trial on murder charges in the drive-by shooting. He is accused of gunning down two men over a spilled drink at a nightclub.

The former tight end grew up in Connecticut, where he starred for Bristol Central High School. Heavily recruited, he initially committed to play for the University of Connecticut, but later switched to the University of Florida, where he played from 2007 to 2009. With the Gators, he became a starter as a sophomore, and starred in the 2009 BCS National Championship Game in which Florida beat the Oklahoma Sooners, 24–14. The next season, Hernandez was named a first-team All-American.

Hernandez declared for the NFL draft after his junior year, and was selected by the New England Patriots in the fourth round. Days after he was selected, The Boston Globe reported that Hernandez had failed multiple drug tests while in college. As a pro, Hernandez became a rookie starter and scored six touchdowns in 14 games. He was named a Pro Bowl alternate in his second season, in 2011, and helped lead the Patriots to Super Bowl XLVI, which the team lost to the New York Giants 17-21.

After cutting Hernandez, the team immediately voided the remaining years on the contract and moved to recoup all of the signing bonus. Less than a year later, he was arrested for the murder of Lloyd and was soon cut by the Patriots, winners of this year’s Super Bowl.