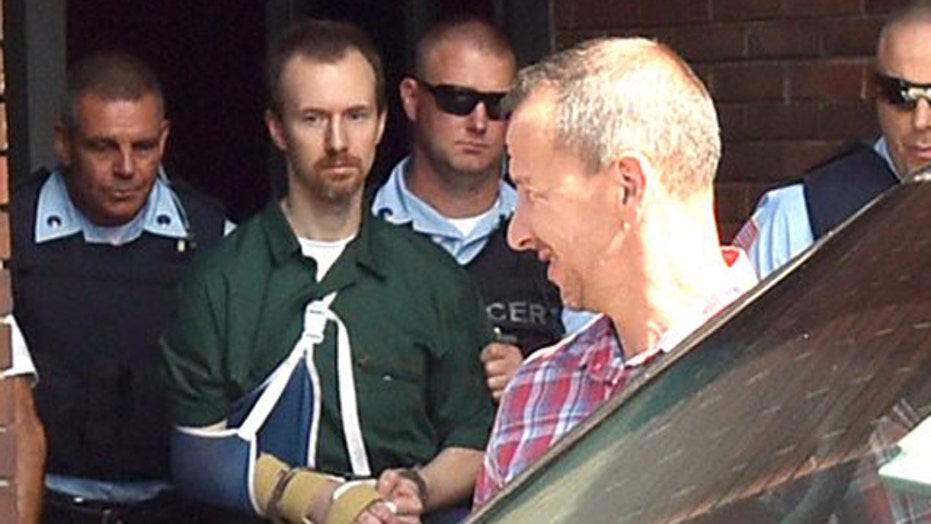 PLATTSBURGH, N.Y. – A convicted killer serving life behind bars when he staged a daring escape from a maximum-security prison was arraigned Thursday on new criminal charges in his first court appearance since his capture after more than three weeks on the run.

David Sweat, shackled and with his right arm in a sling, was brought to court in Plattsburgh from the special housing unit at Five Points Correctional Facility, where he's been kept in a solitary cell for 23 hours a day. A judge entered not-guilty pleas for Sweat on two felony counts of first-degree escape and a felony count of promoting prison contraband for possessing hacksaw blades.

During the brief court appearance, Sweat gave one-word answers to the judge's questions and said nothing as he was taken back out to a waiting corrections department van.

Aug. 20: 2015: David Sweat appears in Clinton County Court in Plattsburgh, N.Y. He escaped from the Clinton Correctional Facility on June 6 and spent more than three weeks on the run. Sweat pleaded not guilty to first-degree escape and promoting prison contraband. He is due back in court on September 29. (Fox News)

Sweat's court-appointed attorney, Joe Mucia, said Sweat was calm and in a good mood. He declined to share what Sweat said or comment on their legal approach.

Each of the charges carries a sentence of up to seven years in prison. Sweat, 35, is serving life without parole for the killing of a sheriff's deputy. Matt, 49, was doing 25 years to life for the kidnapping and hacksaw dismemberment of his former boss.

When asked why Sweat is being charged even though he is already locked up for life, Clinton County District Andrew Wylie said, "He committed a crime in this county, and I'm prosecuting him for that crime. To the county it won't be a great expense."

The prisoners used power tools to saw through steel cell walls and several steel steam pipes, bashed a hole through a 2-foot-thick brick wall, squirmed through pipes and emerged from a manhole outside the prison to find that their getaway driver didn't show up.

Authorities said the escapees had planned to drive to Mexico but ended up walking toward Canada when prison worker Joyce Mitchell backed out of giving them a ride at the last minute.

Matt and Sweat apparently spent more than two weeks together roaming the thick northern New York woods before splitting up. Authorities believe they traveled mostly at night and managed to procure food, a gun and other supplies from hunting camps and seasonal cabins.

Sweat was captured in the town of Constable, about 30 miles northwest of the prison. He had a bag containing maps, tools, bug repellent and Pop Tarts when he was caught.

Mitchell, who worked in the prison tailor shop with the inmates, has pleaded guilty to first-degree promoting prison contraband, a felony, and fourth-degree criminal facilitation, a misdemeanor, for the help she gave the inmates, including smuggling hacksaw blades to them in packages of frozen hamburger.

A prison guard who authorities have said unknowingly abetted the escape plot by giving the hamburger to the inmates has pleaded not guilty to a charge of promoting prison contraband.

Corrections officer Gene Palmer told investigators he gave the convicts tools, art supplies and access to a catwalk electrical box in exchange for paintings by Matt. But he said he never knew of their escape plans.

Wylie said Thursday that his office is in plea negotiations with Palmer's lawyer.

Authorities have said they don't believe there were any other people involved in the escape.