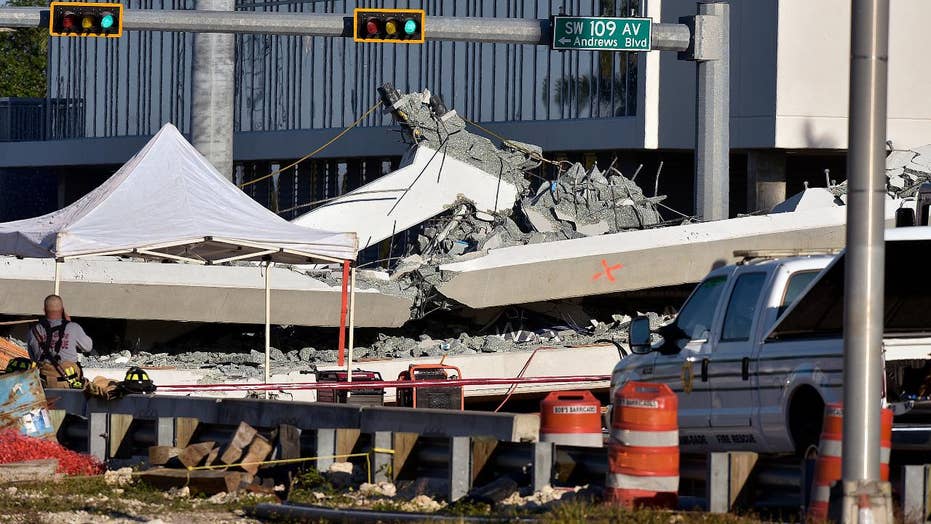 Laura Ingle has the latest on the death toll from Miami, Florida.

The two firms responsible for building Florida International University’s "instant bridge," which suddenly collapsed Thursday and left six people dead, are coming under increased scrutiny as details emerge of past engineering failures and inspection fines -- including a recent accusation that one hired “unskilled” and “careless” workers.

The $14.2-million pedestrian bridge was supposed to open next year to help students cross a busy road adjacent to the campus. It was an accelerated, joint construction effort by two Florida companies: MCM Construction, a Miami-based contractor, and Figg Bridge Design, based in Tallahassee, who both have worked on dozens of projects nationwide, ranging from military facilities to schools.

"Innovations take a design firm into an area where they don't have applicable experience, and then we have another unexpected failure on our hands," Robert Bea, a professor of engineering and construction management at the University of California, Berkeley, told the Associated Press after reviewing the bridge’s design -- and the pile of rubble it was reduced to on Thursday afternoon.

As state and federal investigators worked Friday to determine how and why the five-day-old span failed, one factor may have been the stress test Miami-Dade Mayor Carlos Gimenez said crews were conducting on the span. Two workers were on the 950-ton bridge when it pancaked on top of vehicles waiting at a stoplight.

Renderings of the project before it went up showed a tall, off-center tower with supporting cables attached to the walkway, the Associated Press reported. When the bridge collapsed, the main tower had not yet been installed, and it was unclear what builders were using as temporary supports.

But the collapse is not the first incident involving either company.

The Virginia Department of Labor cited Figg for four violations in 2012 after a 90-ton slab of concrete fell from a bridge it was building near Norfolk, according to the Miami Herald.

Figg was hit with a $28,000 fine and the Department of Labor said the company modified a girder without properly inspecting it or getting written consent from its manufacturer, The Virginian-Pilot reported.

The girder ultimately failed and was responsible for the collapse, which ended up delaying the bridge’s opening for three months and leaving four workers with minor injuries.

Despite this collapse, the company said Thursday that "in our 40-year history, nothing like this has ever happened before."

MCM Construction, meanwhile, in a lawsuit filed earlier this month, was accused of hiring “incompetent, inexperienced, unskilled or careless employees."

The company is building an expansion to Fort Lauderdale International Airport and a worker there was injured when a makeshift bridge collapsed under his weight, the lawsuit says.

The Associated Press, citing Occupational Safety Health Administration records, also said MCM has been slapped with fines totaling more than $50,000 during the past five years for 11 safety violations, which included complaints about cement dust and unsafe trenches at construction sites.

At one point, a subcontractor that walked off a job site won a $143,000 judgment against MCM after citing safety issues with a bridge project on Red Road in the Miami area, the Miami Herald reported.

“MCM is a family business and we are all devastated and doing everything we can to assist,” the company said in a statement on its website Thursday. “We will conduct a full investigation to determine exactly what went wrong and will cooperate with investigators on scene in every way.”

The “building projects” tab of the company’s website shows it has worked on jobs at PortMiami and has built schools, police buildings and adult living facilities.

The Miami Herald, which called MCM one of the “most influential contractors in Miami-Dade,” reported that its name also appears on $130 million in construction jobs from the Department of the Defense and a $63 million school at the Naval Base at Guantanamo Bay.

The accelerated construction method was supposed to reduce risks to workers and pedestrians and minimize traffic disruption, the university had said.

The school has long been interested in this kind of bridge design; in 2010, it opened an Accelerated Bridge Construction Center to "provide the transportation industry with the tools needed to effectively and economically utilize the principles of ABC to enhance mobility and safety, and produce safe, environmentally friendly, long-lasting bridges.

“FIU is about building bridges and student safety. This project accomplishes our mission beautifully,” school president Mark B. Rosenberg said in a statement Saturday that now appears to have been taken off the university’s website.

“We are filled with pride and satisfaction at seeing this engineering feat come to life and connect our campus to the surrounding community where thousands of our students live,” he added.

The FIU community, along with Sweetwater and county officials, even held a "bridge watch party" March 10. That's when the span was lifted from its temporary supports, rotated 90 degrees across an eight-lane thoroughfare and lowered into its permanent position over the busy road.

Rosenberg said Thursday after the bridge’s collapse that the community is feeling “immense sadness, uncontrollable sadness.”

“We're committed to assist in all efforts necessary, and our hope is that this sadness can galvanize the entire community to stay the course, a course of goodness, of hope, of opportunity," Rosenberg said.

The identities of the victims have not yet been released and responders were still looking into the rubble Friday for more people who may be trapped.