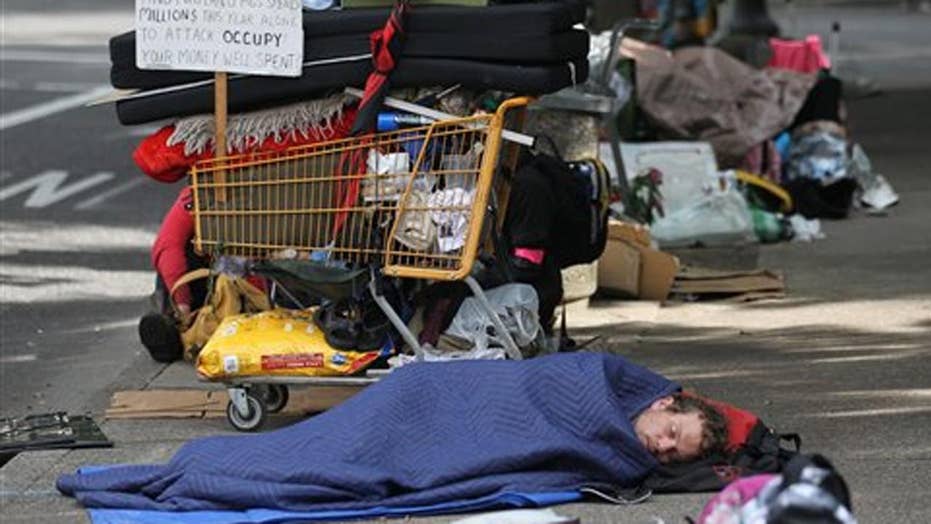 Columbia Sportswear may be the next business to flee downtown Portland after a series of frightening encounters with the city's homeless population, including car break-ins, human waste dumped by the office's front door and threats to its employees.

In an op-ed piece published earlier this month by The Oregonian, Columbia Sportswear President and CEO Tim Boyle said he is concerned he made a mistake when he opened a headquarters for the company’s Sorel footwear brand downtown, calling the situation "outrageous and unacceptable."

"In fact, I am so concerned about the safety of our employees at the Sorel headquarters that we are taking the next 90 days to re-evaluate our location decision," Boyle wrote.

Since moving the 50 employees downtown, workers immediately reported being harassed and threatened by homeless individuals near the new offices.

Small businesses in downtown Portland say they are being forced to close as the increasing homeless population drives away customers. (FOX12)

"A few days ago, one of our employees had to run into traffic when a stranger outside our office followed her and threatened to kill her," he wrote. "On other occasions our employees have arrived at work only to be menaced by individuals camping in the doorway."

Besides face-to-face encounters, employees have also been the target of so many car break-ins the company has started to refer to parking downtown as its "laptop donor program," according to Boyle.

"Given these experiences, it is a relief when the only thing we are dealing with is the garbage and human waste by our front door. Think about that for a minute."

"Given these experiences, it is a relief when the only thing we are dealing with is the garbage and human waste by our front door. Think about that for a minute," he wrote.

For some small business owners in the City of Roses, the increasing homeless population has already proved to be too much to handle.

Judith Arnell told FOX12 Oregon earlier this month the decision to close her business, Judith Arnell Jewelers, came from a mix of panhandling and concerns over the safety of her employees and clients.

Businesses in Portland are beginning to consider pulling out of the city due to the homeless population. (FOX12)

“It’s very difficult to do business here right now. Our customers are afraid to come in,” she said.

Arnell has been doing business in Portland for more than 20 years, but the dramatic decrease in sales as the homeless population has grown has sent her packing. A few months ago, the store's surveillance cameras caught a man defecating right in front of their doors.

“The biggest problem is that the customers feel unsafe, so I can’t afford to save this,” she told FOX 12.

Another owner of a boutique in the Pearl District near downtown said a man threatened her life when she confronted him as he stole items from a clothing rack outside.

Bocci said the man came back later and threatened her life once more.

Boyle told The Oregonian he met with Portland Mayor Ted Wheeler to discuss his concerns and, while he is a "big fan" of the mayor, the decision on whether the Sorel office will stay or go is about the "well-being of our employees."

"If we can't be assured we're moving in the right direction, we're going to have to make a move," he told the newspaper.

Increasing police patrols is one way Portland Mayor Ted Wheeler is trying to stem the tide of thefts. (FOX 12)

A representative from the mayor's office told FOX12 he is “dedicated to improving public safety” in the area.

“As we prepare for the holiday shopping season, the Mayor is dedicated to improving public safety in the downtown business district," the statement said. "People from around the region and beyond come Downtown for a great retail, culinary, and cultural experience. We are working with our partners in the business community to provide visitors a great experience this holiday season.”

On Saturday, officials with Portland Police told FOX12 they were increasing patrols in shopping areas in all three precincts in an effort to deter crime during the holiday season. Officers are also working to educate shoppers on keeping their vehicles “showroom clean” to deter would-be thieves, according to FOX12.