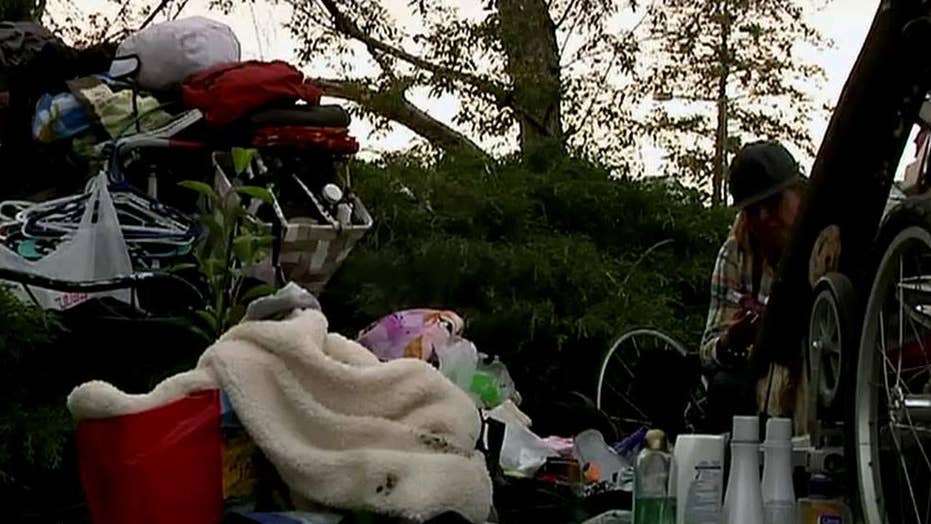 The City of Denver is grappling with a growing homeless problem, and some people blame marijuana legalization for attracting a growing number of drug users now living on the street.

Colorado's homeless population jumped 13 percent from 2015 to 2016, despite that nationally, homelessness declined by 3 percent during the same time period, according the U.S. Department of Housing and Urban Development.

While some blame pot laws, others place the blame on the state's housing dearth.

The state's booming economy has brought in people from all over the country. So many, that home and apartment construction has not kept pace, meaning even some people with jobs find themselves living on the streets of cities like Denver.

"As our unemployment rate continues to decline," explains Denver's homeless czar Erik Solivan, "we have a number of service workers, folks working at construction sites, working at our ballparks, and our service industry, who cannot afford the rent."

Following complaints from downtown businesses, Denver instituted an urban camping ban to keep people from spending the night on city sidewalks, in parks and other public spaces. Last year, the city began a series of sweeps to enforce the camping ban, gathering up tents, sleeping bags and other belongings from homeless people to put into storage.

"They took all my stuff," complains Charlie Berry, who says he's been homeless for several years because of a double hernia operation that didn't work. "All my clothes and all my bedding and everything, and (they) threw it in the trash and hauled it away like it was nothing."

Lane, one of the attorneys involved in a federal class-action lawsuit against the city on behalf of the homeless.

NEVADA TO LEGALIZE POT POSSESSION THIS WEEKEND, AS DEBATE RAGES

A hand-scrawled sign in Durango, Colorado asking people to donate to homeless groups rather than to panhandlers directly. (Joe Kolb/Fox News)

Though there are no hard statistics to back it up, some people – including Charlie Berry, who grew up in Denver – say some of the homeless have come to Colorado for legalized marijuana.

"Basically, all they want to do is just come here and smoke pot,” Berry said. “When you legalize marijuana you open the door to a whole new level of hell."

Since Denver began cracking down, homeowners and businesses on the periphery of downtown say the problem has just moved outward to where they are located.

Hollingsworth and other business owners and homeowners say there are serious health and safety issues created by the trash, drug paraphernalia and human waste left on their lawns by people camping out overnight. One homeowner, who did not want her name used, told Fox News she woke up one morning to see a homeless man peeing right in front of her window.

Solutions are not simple.

Denver has several shelters for the homeless, but Berry says many avoid them because alcohol and drugs are not allowed, and because only a small amount of personal belongings can be taken in.

"You can't bring your stuff inside so you have to leave it outside,” he said. “Basically, you might as well put a 'free' sign on it you know?"

The city said it is committed to dealing with the growing problem. In January, Mayor Michael Hancock announced the hiring of Solivan to head a newly created housing coordination office.

Solivan said Denver is working on several new programs to try to people get off the streets.

"Programs like our sidewalk storage (lockers)... They can store their materials on the sidewalk, get access to it 24 hours a day,” he said. “We've also addressed and are looking at alternative housing options like the tiny home village."

The last idea is based on programs like the one in Seattle, which provides temporary shelters for homeless people complete with plumbing, kitchens and locks to protect belongings until more permanent housing can be found.